Recent events were bullish for gold and the Cyprus bailout fiasco should have been a catalyst for higher prices, but it wasn’t. So is this the end of the Bull Run for gold

All the factors for higher gold prices should be there. Central banks remain committed to easy money and the Bank of Japan is vowing to catch up with US Federal Reserve and the Bank of England in terms of quantitative easing and will send more liquidity coasting through the veins of the global financial system.

The mishandled bailout of Cyprus, which put bank depositors in the firing line for the first time during the financial crisis, should have in itself been enough to send nervous holders of fiat currency rushing for the safety of the yellow metal. But during that whole episode gold only managed a modest bounce.

Gold chart – The only way is down? 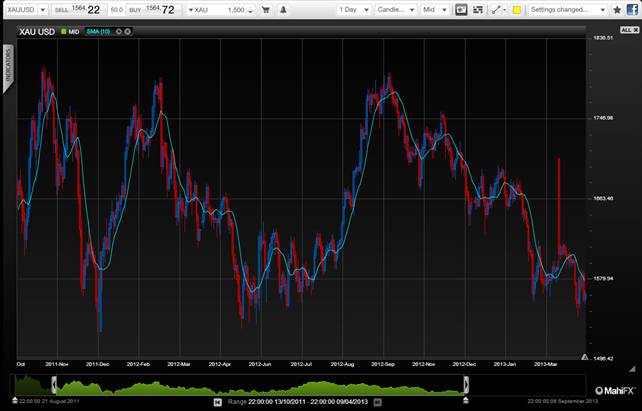 In effect when a market ceases to move higher on events that are bullish for it, then something is wrong. And sentiment has been steadily turning against gold with banks such as Goldman Sachs, SociÃ©tÃ©  GÃ©nÃ©rale and Citigroup all forecasting lower prices. Even legendary trader George Soros is scaling back his positions.

Betting on an improving economy

Investors believe that the global economy is improving. The financial systems of the developed world are in much better shape than they were three to four years ago. Also, the tidal wave of quantitative easing has not triggered hyper-inflation nor even very high inflation. Therefore if

gold is viewed from the point of view of being the ultimate catastrophe insurance for wealth preservation then right now it is perceived as a lot less needed and hence it is becoming cheaper.

While those perceptions prevail gold prices should carry on falling making it a short sell. Momentum traders are clearly bailing out and short sellers are lining up to ride the yellow metal on the downside.

Another negative for gold could actually have emerged from the Cyprus bailout. The European Commission is pressurising the country to sell some of its gold reserves to help fund its bailout – the amount involved is relatively small as it’s reserves were only 13.9 tonnes at the end of February.

But the concern is precedent and this is the first time it is being seriously considered. What happens if gold sales feature for other Eurozone bailouts. Portugal holds 382.5 tonnes, Spain has around 281 tonnes and then Italy has just under 2,452 tonnes making it the world’s fourth largest holder. A trickle of gold sales from Cyprus could become a flood if Italy needed rescuing. And this particular downside risk isn’t priced into the market.

Precisely to avoid a self fulfilling collapse in the gold price those countries could use their reserves for loan guarantees instead to other central banks and institutions such as the IMF.

But on the plus side one important factor remains. USD, JPY and GBP continue to be created at a faster rate than gold is being mined. Logically should that continue gold prices should eventually turn back up again, but that probably won’t happen this year and maybe not even in 2014.

Factors to watch are the US economy and the Eurozone crisis – both are far from being out of the woods. The US economy is failing to recover at a pace comparable with previous recoveries despite the unprecedented monetary stimulus efforts and the same applies even more to the UK.

Last week’s surprisingly weak jobs growth in the US is also a cause for concern and should it represent a trend then the Fed will likely maintain its quantitative easing programme well into next year.

While the Eurozone economy is actually weakening. That makes it more likely other countries within the club will need bailing out at some point and will increase the difficulty of turning around those already in trouble. And though a more responsive European Central Bank has reduced systemic risk, it can only do so much. Ultimately preservation of the EUR requires a return to economic growth to reduce financial strains.

The ultimate crisis in confidence?

The other point to ponder is how developed countries are going to pay down their enormous debts if they can’t rekindle sustainable economic growth. That might eventually bring into question the credit worthiness of the bonds issued by countries such as the US, Japan, Germany and the UK. Should quantitative easing be widely perceived as being motivated by financing governments rather than re-firing economic growth then all hell could break lose in the currency and bond markets.

The price of the ultimate in catastrophe insurance might be falling at the moment and could even test to levels of around $1,400 troy/oz. However, the potential catalysts for a return to a full blown financial crisis are far from passed and gold may yet shine again.

Recent events were bullish for gold and the Cyprus bailout fiasco should have been a catalyst for higher prices, but it wasn't. So is this the end of the Bull Run for gold All the factors for higher gold prices should be there. Central banks remain committed to easy money and the Bank of Japan is vowing to catch up with US Federal Reserve and the Bank of England in terms of quantitative easing and will send more liquidity coasting through the veins of the global financial system. By Justin Pugsley, Markets Analyst MahiFX. The mishandled bailout of Cyprus, which…