Update:  Gold prices edge lower with substantial losses following the higher US 10-year benchmark yields. The spot price came under selling pressure after Fed Chair Jerome Powell on Wednesday spoke about inflation, the Fed’s dot plot, and tapering plans. The sudden twist in the Cental’s bank tone ignited a fresh round of selling in the precious metal. Gold prices reacted to a rise in the US Treasury yields, which rose 1.58% on Wednesday. Investors remain attentive to Central bank projections for the higher inflation expectations for this year,  and a possibility of two rate hikes till 2023. The higher interest rates would diminish the shine of the non-yielding asset as they translate into a higher opportunity cost. The US dollar jumped to its highest level in the previous two months at 91.46, making gold more expensive for the other currencies holders.

Gold (XAU/USD) licks its wound around $1,816-17, up 0.30% intraday, following the heaviest drop since January 08 led by US Federal Reserve (Fed) actions. That said, the gold traders keep bounce off $1,803, near to the $1,800 psychological magnet, even as US Treasury yields remain firmer by the press time of Thursday’s Asian session.

US 10-year Treasury yield marks 1.7 basis points (bps) of intraday gain to 1.586%, the highest level in two weeks, but the US dollar index (DXY) struggles to extend the strongest daily jump in over a year while taking rounds to 91.40-38.

Although the US dollar’s sluggish move helps gold prices, strong Treasury yields keep gold buyers in check. Even so, the quote bounces back towards the previous support structure around $1,845, comprising the early May’s tops and Monday’s low.

Moving on, gold traders should keep their eyes on how market players digest the Fed’s drama for fresh impulse.

Read:  Gold Price Analysis: XAU/USD next critical support only at $1,822 after the Fed – Confluence Detector

Gold prices have dropped some 22  bucks on the Federal Reserve’s hawkish statement and interest rate decision.

At the time of writing, XAU/USD is trading at $1,839.65, lowest since 12th May and now at daily support structure.

However, there is nothing dramatic in the immediate aftermath and the focus will now be on the Fed’s chairman, Jerome Powell.

Key notes on the Fed, so far

Overall, this is seen as positive for the greenback, bearish for gold  and sets up an  AugustJackson Hole taper announcement.

It will be especially important for forex volatility over the summer months that has been at the lowest levels in over a year: 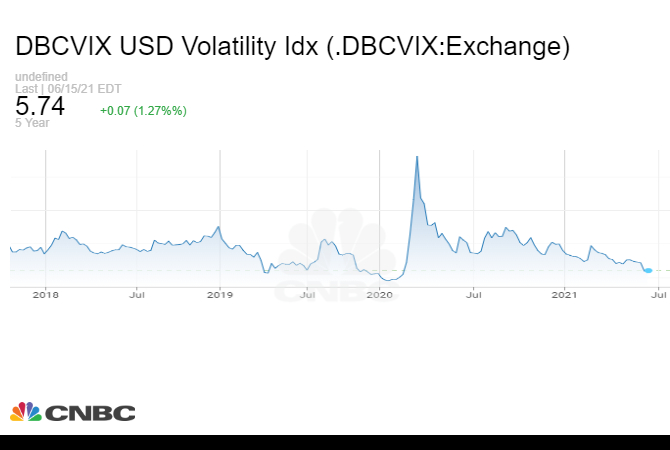 Jerome Powell may talk the hawkish reaction down in his presser which can be seen live here:

This makes for some lower hanging fruit if Powell intends to play down the hawkish statement, considering that that gold is now at a daily support and would be expected to correct higher according to  the M-formation:

On the hourly chart, bulls can look for a higher probability setup once immediate resistance is broken to target the prior daily lows: