Latest
You are at:Home»Forex News»Is the EUR/USD rise temporary? Fears of a recession emerge

The tight trade contrasts the action around several geopolitical developments. The see-saw around trade relations between China and the US continues. After Trump tweeted that he will impose further tariffs on China early on Friday, the tone over the weekend was different. The US President said that his Chinese counterpart Xi Jinping and he will remain friends. Soothing words also came from Treasury Secretary Steven Mnuchin. However, reports coming out of China suggest that the world’s second-largest economy may be contemplating a devaluation of the Yuan, a move that serves as an escalation in trade.

So far, higher trade tension pushed the US dollar down while optimism has pushed it higher. And while today’s forex moves are minimal, things could erupt at any moment.

More: Trump tariff plan explained: What are trade wars and how do they affect currencies

Elsewhere, North Korea has notified the White House that it is ready to discuss denuclearization, adding to hopes for peace. In Syria, a bombing of an airbase was attributed to Israel. This follows a chemical attack by the Syrian regime that was condemned by the West. Both developments did not move the needle in the EUR/USD.

In the euro-zone, we learned about further signs of a slowdown. The Sentix Investor Confidence measure extended its falls and reached 19.6 points, worse than expected and an extension of the drops from the highs. The disappointing forward-looking gauge joins the hard data reported from Germany last week: factory orders, industrial output, and retail sales all missed the mark.

The British press suggested that the euro-zone is on its way to an outright recession. The headlines may be sensational but this kind of fear may certainly manifest itself to lower confidence, at least among ECB members, that may opt to extend the current QE program.

With a light calendar today, markets are gearing towards a busy Wednesday: a speech by ECB President Mario Draghi, US inflation data, the FOMC Meeting Minutes stand out. 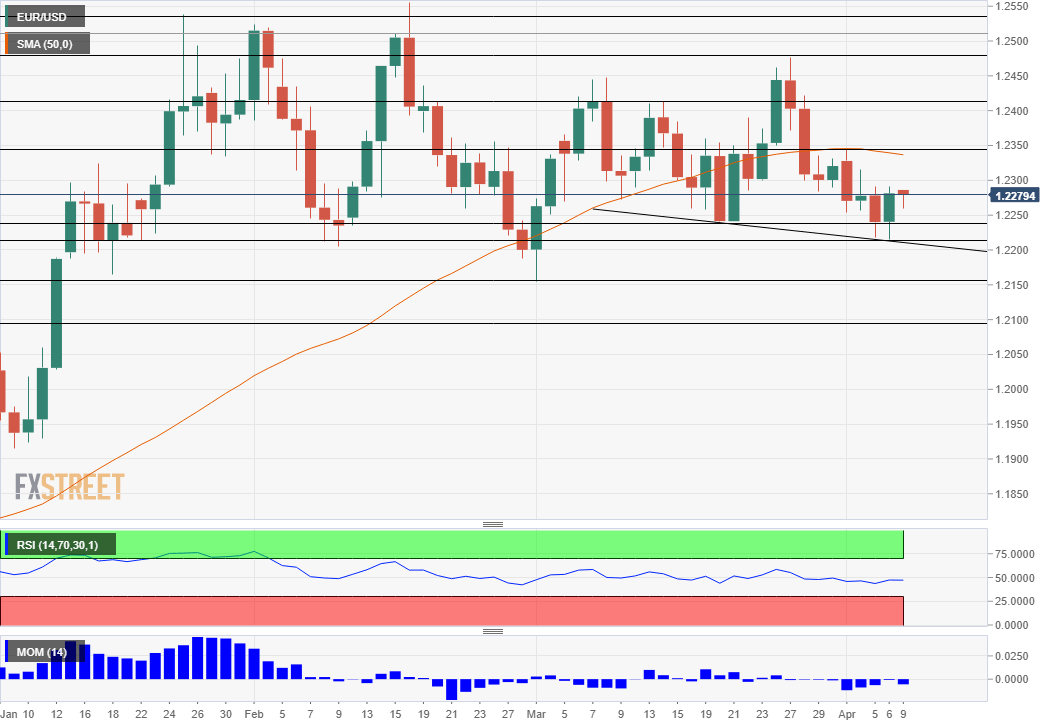 The EUR/USD is trading below the 50-day Simple Moving Average which comes out around $1.2345. This is also a high point seen last week. The RSI is slightly below 50 points and Momentum points to the downside. None of these indicators is strong, but the direction is down. The pair has also marked a lower low with the recent drop to $1.2210, below the $1.2240 trough seen in March, another bearish sign.

Get the 5 most predictable currency pairs
Previous ArticleUSD/JPY turning a corner? Not so fast – Forecast April 9-13
Next Article EUR/USD: Break or bounce at resistance convergence cluster?