The mood music in currency and asset markets remains circumspect as fresh brush-fires break out in Europe. According to a Greek news report, the IMF is reluctant to sanction the next aid instalment to Greece amidst signs that the troika and Athens are further apart than they were admitting last week.

A general strike in both Spain and Greece has been earmarked for coming days. Separately, the FT claims today that the governments of northern Europe are not prepared to allow Ireland and Spain to transfer existing bad bank assets from government balance sheets.

Meanwhile, Germany continues to hesitate on the issue of European bank supervision and Bundesbank President Weidman has issued another warning that OMT could be harmful in the long term. In response, the dollar and Japanese yen have crept higher once again while the single currency is down at 1.2865. The latter is likely to test support at the 200d moving average sometime today (at 1.2827). Another currency that continues to lose traction is the Aussie, which dropped below 1.0350 overnight and is testing the 200d moving average. At a time when the global economy is so fragile, macro risks for a high-beta currency such as the Aussie remains elevated.

The persistent pound. The economy is in recession, the public finances are terrifying, the household sector is struggling to make ends meet and yet the currency is still remarkably perky. Cable traded through 1.63 on Friday, a 13mth high and since early June the pound has appreciated by ten big figures. Against the newly-empowered single currency, sterling has been holding its own – indeed, since the Fed announced QE3 back on September 13th the British currency has handsomely outperformed the euro. Helpful for the pound in recent days has been the expectation of favourable month-end and quarter-end flows. Interestingly, the pound has held a bid tone persistently over the past week or so, despite the recovery in the dollar. Looking ahead, sterling could make some further gains against the majors in the near term. Traders are still remarkably circumspect regarding the pound, and as such there is plenty of potential for a wash-out of short positions if sterling heads higher. Also, the mood towards the euro is becoming nervous again; generally the pound benefits whenever there are doubts and anxieties regarding the single currency. The better way of playing a stronger pound would be against a basket of major currencies (as the short side of the trade).

Peering over the cliff edge. A look at Google Trends shows that ‘fiscal cliff’ started coming into common usage around mid-Apil of this year, and it has been rising ever since.   The recent monthly Merrill Lynch survey of fund managers showed the phrase rising above the ‘eurozone crisis’ (in some quarters) as the biggest tail risk for investors.   Briefly, the fiscal cliff is the expiration of various tax cuts and the automatic imposition of spending cuts at the end of the year, which would, in theory, take around USD 7trln from the US economy over the coming ten years, or around USD 500bn in 2013 alone (around 3% of GDP).   Markets have to grapple with two questions: what it would mean for the dollar (not always clear cut) and whether it will actually happen, in whole or in part. For the dollar, in essence it’s a negative scenario.   Generally, the combination of tight fiscal policy (restraining growth) and loose monetary policy (keeping interest rates low) has usually proven to be a negative for the currency. However, in this instance, rarely has such an intense tightening of fiscal policy been implemented in such a short space of time.   For the US, the largest fiscal tightening seen has been around 1.8% of GDP.   Whilst there have been examples of countries tightening by more than 3% of GDP, this has invariably been in times of economic strength or revenue windfalls of one sort or another (such as oil revenues). The more crucial question for currencies is who is going to blink first? Markets (by pricing in this scenario) or politicians (by doing something about it). For some, this is the way of US politics, as was seen with last year’s debt ceiling-drama, with a deal reached in the closing stages.   It’s also the case that the dollar’s reserve status in the global economy shields it (to a degree) from the consequnces of such prevarication, evident from the relatively limited fallout from the debt ceiling-debate last August. So for now at least, it looks more likely that the dollar will hold its nerve, perhaps aided by the increased chance of the incumbent remaining in the White House.   The resilience seen since the Fed’s QE3 announcement is also indicative of a currency not yet prepared to throw in the towel. Although participants in currency markets are increasingly anxious about the fiscal cliff, the probability of a reasonably satisfactory solution is high. 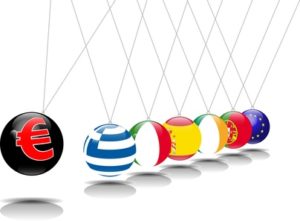 The mood music in currency and asset markets remains circumspect as fresh brush-fires break out in Europe. According to a Greek news report, the IMF is reluctant to sanction the next aid instalment to Greece amidst signs that the troika and Athens are further apart than they were admitting last week. A general strike in both Spain and Greece has been earmarked for coming days. Separately, the FT claims today that the governments of northern Europe are not prepared to allow Ireland and Spain to transfer existing bad bank assets from government balance sheets. Guest post by Forex Broker FxPro…