4 events await kiwi traders in the upcoming week, with the business confidence being the highlight. Here’s an outlook for the events in New Zealand and an updated technical analysis for NZD/USD. 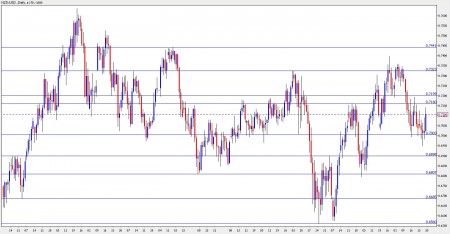 The kiwi saw tensed range trading in the past week and didn’t make dramatic moves. This week should provide more action, after the summer vacation is over. Let’s start:

The pair continues to range between 0.70, the round number that is a strong line of support, and 0.7160 which was a stubborn peak in June.

Looking down, 0.69 is the next line of support. It  previously  worked as a line of resistance in May, after the pair fell down sharply.

Below, 0.68, that was a swing low in mid-July and also held NZD/USD in February is the next support line. Lower, 0.6685 worked as support back in September and was a pivotal line in July. The final line for now is the year-to-date low of 0.6560.

Above 0.7160, the next resistance line is 0.72 that worked as support quite recently. Higher, 0.7325 that was an area of struggle and also a peak in May is the next line of resistance, followed by the 0.7440 region, which capped the pair when it traded higher.

I remain bearish on NZD/USD.

As the chances of double-dip recession in the US seem strong, risk aversive trading hurts the kiwi. As the last big release from New Zealand was the very disappointing rise in unemployment, the pair isn’t well positioned to weather the storm.

4 events await kiwi traders in the upcoming week, with the business confidence being the highlight. Here's an outlook for the events in New Zealand and an updated technical analysis for NZD/USD. NZD/USD daily chart with support and resistance lines marked. Click to enlarge: The kiwi saw tensed range trading in the past week and didn't make dramatic moves. This week should provide more action, after the summer vacation is over. Let's start: Trade Balance: Published on Sunday at 22:45 GMT. New Zealand enjoyed many months of surplus in its trade balance. But after it squeezed sharply to 276 million…