This week’s isn’t too busy with indicators, so the technicals will play a significant role in the kiwi’s trading. Here’s an outlook for the events in New Zealand and an updated technical analysis for NZD/USD. 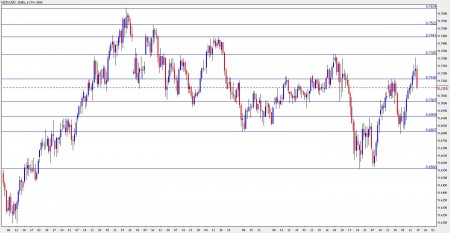 The kiwi began the week with some range trading, and then made a breakout and rose above 0.7160. An attempt to reach the strong resistance line of 0.7325 failed, and the pair fell sharply towards the end of the week to close at 0.7102.

Note that some lines have changed since last week’s outlook. NZD/USD now trades between 0.7160 and the round number of 0.70, which provides strong support.

There are more lines below, but the most significant one worth mentioning is the year-to-date low of 0.6560.

Even higher, 0.7520 was a peak in November, and it’s followed by 0.7630, which was the highest level since the outbreak of the financial crisis.

I remain bullish on NZD/USD.

Despite worsening global conditions, the economy in New Zealand is doing well, and the rising interest rates attract investors, creating a potential for further rises.

This week's isn't too busy with indicators, so the technicals will play a significant role in the kiwi's trading. Here's an outlook for the events in New Zealand and an updated technical analysis for NZD/USD. NZD/USD daily chart with support and resistance lines marked. Click to enlarge: Retail sales disappointed once again in New Zealand, hinting that the rates could rise more slowly than expected. Nevertheless, the kiwi is enjoying risk aversive trading and it's rising. Let's start: Visitor Arrivals: Published on Wednesday at 22:45 GMT. New Zealand's economy depends on tourism, making this figure very important. After a disappointing…