Business confidence is the highlight of this week’s kiwi events, as the currency cannot avoid European troubles. Here’s an outlook for the events in New Zealand and an updated technical analysis for NZD/USD. 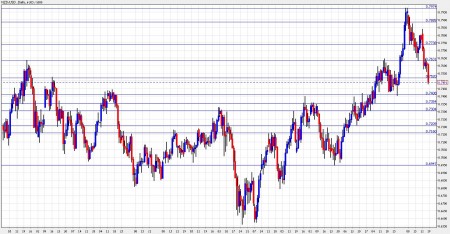 Note that some lines have changed since last week’s outlook. Looking up, 0.7520, which was a peak one year ago and recently served as a pivotal line, is the immediate line of resistance. Above, 0.7630 was also a peak in 2009 and recently worked as support.

Looking down, the next support line is at 0.74, the  lowest  point in the past two months, and also a resistance line earlier. Below, minor support is found at 0.7355, which was a stubborn peak in the summer.

Below, 0.73 worked in both direction and is the next and close support line. Strong support is found at 0.72, which already had this role earlier. It’s closely followed by 0.7160, before the round number of 0.70. The last line for now is 0.6950 which was the lowest level in 4 months.

I am neutral on NZD/USD.

The headwinds form Europe were a big blow to the kiwi, despite sound fundamentals and an expected rise in commodity prices following QE2. A stabilization in the situation in Europe will allow the kiwi to stabilize as well.

Spanish House Prices May Be Lower Than Thought – Problem

Business confidence is the highlight of this week's kiwi events, as the currency cannot avoid European troubles. Here's an outlook for the events in New Zealand and an updated technical analysis for NZD/USD. NZD/USD daily chart with support and resistance lines marked. Click to enlarge: Inflation expectations, released this week in New Zealand, showed steady price rises, nothing that implies an upcoming rate hike. Will the kiwi continue weakening? Let's start: Trade Balance: Sunday, 21:45. New Zealand has a deficit in its trade balance in the past three months, weighing on the currency. This deficit is now expected to squeeze…