CPI is the key event in the kiwi’s week. Here’s an outlook for the events in New Zealand, and an updated technical analysis for NZD/USD. 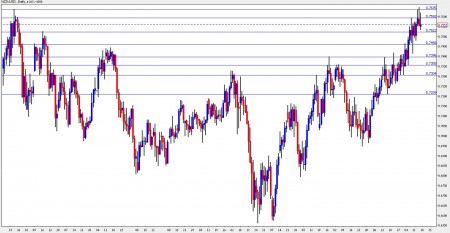 After a struggle with the 0.7523 line, NZD/USD managed to climb above last week’s peak and encountered the important 0.7634 line (mentioned in last week’s outlook). It finally lost steam and closed at 0.7557, very close to last week’s close.

Looking up, immediate resistance is found at 0.76, a round number which was almost the peak (0.7592) in the previous week. Above, 0.7634 was a peak in October and is the highest level in two years – it served as strong resistance just now.

Looking down, immediate and minor support is found at 0.7523, the high from November 2009. Below, 0.7460 was a point of friction during September and now provides further support.

Even lower, 0.73 and 0.72 also worked as support and resistance lines in recent months, and are far below.

I remain bearish on NZD/USD.

Contrary to its neighbor, New Zealand lacks strong fundamentals to push it higher. A stable US dollar will find NZD/USD ready to fall, unless there’s a huge surprise with the CPI.

CPI is the key event in the kiwi's week. Here's an outlook for the events in New Zealand, and an updated technical analysis for NZD/USD. NZD/USD  daily chart with support and resistance lines marked. Click to enlarge: NZD/USD climbed to fresh highs but found strong resistance. Will it make a break now? Let's start: CPI: Sunday, 21:45. Inflation figures are released only once per quarter in New Zealand, making this release very important. In the past three quarter, the consumer price index fell short of expectations. In Q2, prices rose by 0.3%, and this weakened the kiwi. CPI is expected…