Latest
You are at:Home»Opinions»Powell five punches and where next for EUR/USD

Markets have been expecting the Federal Reserve to cut rates for several weeks – and Federal Reserve Chair Jerome Powell more than confirmed it – sending the dollar down.

1) Dim outlook: Powell described how uncertainties since June’s Feddecision have continued dimming the economic outlook. Moreover, back then, there were only “many” but not “most” members wanting a rate cut, and now things have deteriorated. His words imply a cut is coming.

2) Uncertainties about trade: The Fed Chair seems unconvinced about the trade truce reached by President Donald Trump and his Chinese counterpart Xi Jinping. While the central-banker refrained from commenting on trade policy, he stressed that uncertainty about trade remains a critical concern – repeating trade as being one of the top factors for the upcoming decision.

3) Investment notably slower: If recent trade headwinds impact the upcoming rate decision, investment impact long-term policy and also the potential for a long cycle of rate cuts. The Fed Chair said that investment had fallen notably and that may continue taking its toll for many months ahead.

4) Weak inflation more persistent: Back in May, Powell dismissed subdued inflation as “transitory.” In June, he dropped this wording. And now, he seems fearful that weak inflation is becoming persistent. Is he hinting about a disappointing number in Thursday’s Consumer Price Index report?

5) Not hot jobs market: While the statement praises the “strong” jobs market,” Powell stated that he could not describe the labor market as hot. People are still being drawn in. To add insult to injury, he says that the current rise in wages is insufficient to push inflation higher. 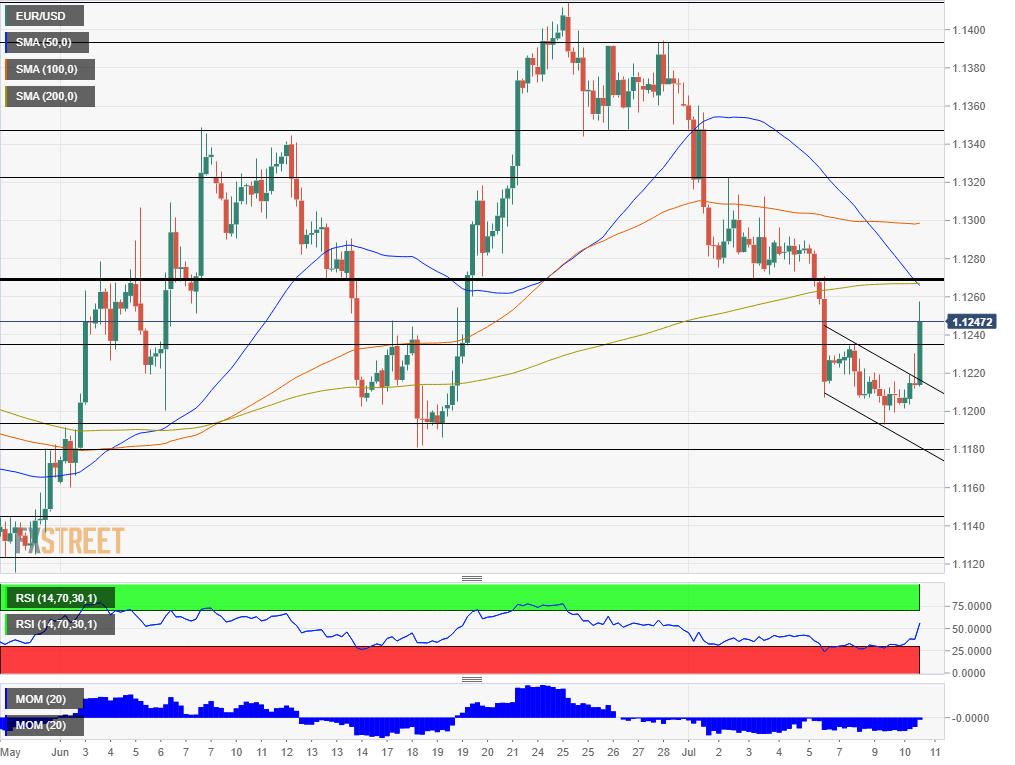 EUR/SUD has risen sharply, breaking above the short-term downtrend channel. It is now facing critical resistance at 1.1270, which is the confluence of the 50 and 200 Simple Moving Averages on the four-hour chart. The level also served as support last week.

Get the 5 most predictable currency pairs
Previous ArticleUSD/JPY technical analysis: Greenback losing steam below 109 ahead of the FOMC minutes
Next Article Ripple’s XRP bears are forcing much bleeding below $0.4000; price drops 11% within last two hours