Latest
You are at:Home»Opinions»QE Landing in Europe – Is the Euro Headed South?

At last, the intervention of the ECB in the bond markets is serious. So serious, that doubts arise about the ability of the ECB to sterilize it, or to transfer it to the EFSF.

This might be morphing in a Quantitative Easing program that Trichet vehemently rejected but might seriously help the old continent, at the same time when QE is absent on the other side of Atlantic. Will EUR/USD drop out of the wide range?

Finally, Trichet became a super hero: The success of the ECB program is seen in falling yields: Italian bond yields are 13% lower to 5.30%. Spain’s are almost 15% lower to 5.16%, lower than the range seen before the recent round of the crisis. Trichet’s fresh actions are much more fruitful than those of EU leaders in July 21 Summit that clearly fell short of sufficient action. 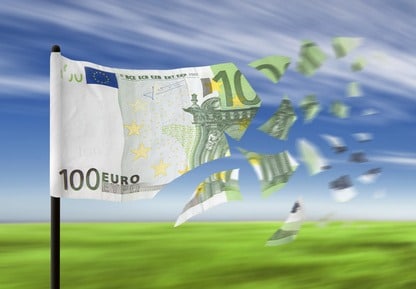 Why? The ECB has the tools to act. The preventive tools given to the EFSF are subject to parliaments’ approval, and despite the recent urging of a quick ratification, this is still far. In the meantime, the ECB is on the ground. Despite reluctant German members’ doubts. And despite anger in Italy about the ECB dictating the terms to Berlusconi.

Too Great a Success for the Euro

We still don’t know the size of the bond buying. We will know it only next Monday. But this great success, which also helped Italian and Spanish stock markets, is backed by a lot of cash. Up to now, the ECB’s SMP program of buying bonds was sterlized: this means that money was drained from the markets. The small scale allowed it to be manageable.

But if the scale is really big, the ECB will find it hard to drain out the money – this means that the ECB is actually printing money – printing euros in a quantitative easing program. This is no different from the two QE programs launched by the US Federal Reserve.

QE Lessons from the US

As we’ve seen in the US and the UK, creating money out of nothing weakens the currency. Every hint of increasing or decreasing QE programs moves the currencies.

It’s not only the hints or the changes in expectations that move the markets – it’s also the actions. QE2 ended in the end of June in the US. This was well communicated to the markets for a long time, so the results weren’t immediate.

But now we can already see how oil prices, fueled by the US QE, are falling, back to the levels last seen in November 2010, when QE2 was announced. The dollar took more time to fall after QE2 was launched, and isn’t recovering yet.

While it may take more time for the dollar, it may find it easier to ride against the euro. The ECB is unwillingly finding itself in a QE program.

It may be bad for the euro, but will help some troubled countries: a weaker euro means better competitiveness of exports. With more growth, Italy, Spain, Ireland, Portugal and Greece have much better prospects of reducing their debt.