Into the close of last year price action was functioning on the dynamic of expectations of euro zone political turmoil weighing on EUR and “Trump-flation” supporting USD. Fast forward four months and we have seen a stark break down in this dynamic and a reversal in direction for EURUSD.

Donald Trump’s election was a key moment for FX markets, headlining a period which saw political drivers overtaking economic drivers as the key catalyst for price action.  Trump’s promises of decreased regulation, tax cuts, and increased infrastructure spending translated into a sharp upward repricing of both US growth and rates, leading to a significant rally in USD. However, nearly half a year on from Trump’s election it is now becoming clear to the market that both the time line and the scale of the changes is likely to be disappointing.

The key moment so far was the failure of the Trump administration to achieve Congressional support for the healthcare reform act raising doubts about Trump’s ability to deliver on another campaign. Indeed, Trump had commented during a TV interview that he planned to address healthcare reform before tax reform, using the subsequent savings to fund tax reform. It is now unclear whether Trump’s tax cuts can be delivered, especially on the scale first announced.

Expectations of upgraded growth and reflation linked to US fiscal policy also ignited expectations of a more aggressive tightening path by the Fed. However, the Fed themselves have noted how their policy approach is being constrained by the wait for further details on Trump’s policies, and as such, markets have been dialling back Fed rate-hike expectations which have also been weighing on USD.

The Euro started the year under pressure as markets braced themselves for a wave of elections (Austrian, Dutch and French) which each ran the risk of seeing Eurosceptic parties elected. Populist support and anti-EU sentiment had been growing steadily, and many investors viewed the risk of EU fragmentation as real, resulting in EUR selling. However, both the Austrian and Dutch elections passed without seeing Eurosceptic parties gain power and the first round of French voting suggests that the final outcome will be the same there also.

Although risk premium in the Euro isn’t likely to be fully removed until the final vote is complete on May 7th, investors are buoyed by the results of the first round which saw centrist candidate Macron beating far-right candidate Le Pen by 23.8% to 21.3%. Macron is widely expected to continue and beat Le Pen in the second round thus avoiding the latter’s promise to hold a referendum on EU membership. Consequently, eurozone political drivers are now shifting from a negative pressure to a positive pressure as support for both the EU and the Euro is reaffirmed by member nations at an important time.

Investors are now turning their attention to the ECB who has already reduced its monthly asset purchases from EUR80bln to EUR60bln. When this move was first announced in December 2016, the central bank was keen to emphasise that this was not tapering and that the bank could still ultimately purchase more bonds than before if the programme duration was extended. However, the market has taken this move as a hawkish sign and is now working to gauge when the next stage of tapering will be delivered.

This dynamic has been clearly reflected in EUR institutional positioning which has moved from record short levels in 2015 to near neutral levels now and could soon flip net-long on a Macron victory or ECB tapering announcement. Indeed, money markets are now reflecting expectations of a rate rise by early 2018. 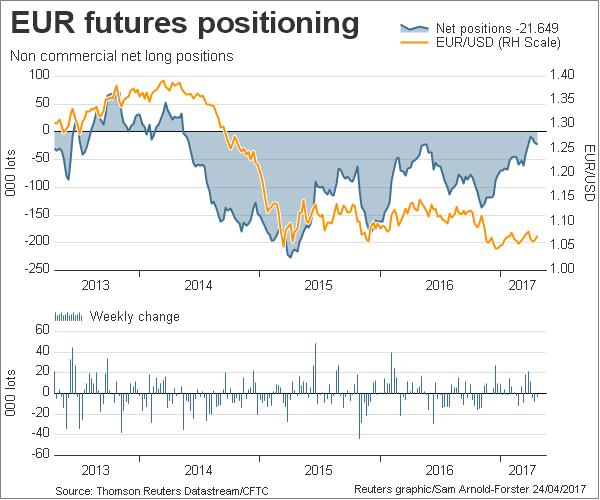 The dissipation of political risks as well as continued positive surprises in eurozone data suggests upside risks to the ECB’s monetary policy approach and creates an opportunity for upside movement in EURUSD as USD suffers from downside risks linked to the Fed’s outlook for two further expected rate increases this year.

EURUSD has rallied off the lows having breached the 2015 low print at the end of 2016. For now, the price is correcting higher within the short term bullish channel (shown in green), approaching medium term bearish channel resistance (shown in purple). A break here paves the way for a rotation higher to test the longer term bearish channel top (shown in yellow).  The current resistance around the 1.09 mark is a key pivot for the price and once above, EUR should find support at a retest of the level for a continued push to the upside. 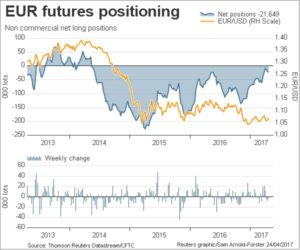 USD Perspective Into the close of last year price action was functioning on the dynamic of expectations of euro zone political turmoil weighing on EUR and "Trump-flation" supporting USD. Fast forward four months and we have seen a stark break down in this dynamic and a reversal in direction for EURUSD. Donald Trump's election was a key moment for FX markets, headlining a period which saw political drivers overtaking economic drivers as the key catalyst for price action.  Trump's promises of decreased regulation, tax cuts, and increased infrastructure spending translated into a sharp upward repricing of both US growth and…