Home » State of EUR/USD – The fall, the recovery and what’s

State of EUR/USD – The fall, the recovery and what’s

Just one year ago, EUR/USD traded at nearly 1.40. Since then, it has lost a lot of ground but managed to recover.

Why did the pair fall so much, recover and what’s next? Here is an overview and an outlook:

EUR/USD fell from a peak of nearly 1.40 in May to 1.05 a few months ago, and it recovered only to 1.14.  The main factor pushing the currency pair down is: monetary policy divergence.

Up to October, the US Federal Reserve was practically printing dollars (officially known as Quantitative Easing or QE), buying bonds and weakening the US dollar.

Until June, the European Central Bank had a positive interest rate.  The Fed has a mandate of price stability (aka 2% inflation more or less) and full employment. The ECB only cares about inflation.

As the situation in the US continued improving, especially with higher employment, the Fed printed less and less dollars during 2014 until it reached a full stop in October.

And now, the focus of the markets is on the first rate hike. Since the crisis, the US has an interest rate of 0-0.25% – rock bottom. Current expectations stand on an initial hike in September or December. There is still a small chance it will happen in June, but the bad weather in the winter as well as other problems with the economy in the first quarter lowered expectations for an early move.
These are the dates when the Fed has meetings that are accompanied by press conferences.

September is a good time to lift the interest rates, and it could be  accompanied by some kind of “sweetener“: another promise to markets that future rate hikes will be extremely gradual, and that the peak interest rate will be lower than in past episodes of rate hikes – it will not cross the 5% level like in 2006 but will reach 3.5% and only after a long time. Despite all the improvement in the US economy, the Federal Reserve is very “dovish” – prefers to support the economy and risk a bubble / high inflation than choke the recovery too early.

Currently, the US dollar is enjoying the expectations for a hike. Once that once it happens, we could have some kind of “buy the rumor, sell the fact” phenomenon: once the news is out, there are no more expectations, and the dollar will eventually slide back down.
In addition and despite the fact that the US is more closed that the euro-zone one, the Fed does not like a very strong dollar.

Inflation in the euro-zone has been too low and created fears of a “deflation spiral“: a situation in which prices fall, people buy less because they expect prices to fall, factories fire people because they have less sales, people who are unemployed buy less, and this vicious cycle continues.

The fear of deflation worsened late in 2014 because of the fall in oil prices. The ECB is concerned about headline inflation, aka, everything, including food and energy, while the Fed looks at “core” inflation, everything excluding the most volatile factors such as gasoline and food. And everywhere, the focus is on year over year inflation: changes in prices since the same time one year before.
In addition, the economic situation in the euro-zone isn’t too good, with unemployment standing at 11.3% and growth being very fragile.

In January it announced its own bond buying / euro printing / QE program in order to lift inflation and stimulate the economy. The program is expected to run until September 2016 and to surpass one trillion euros. Some had expected that it would not be able to implement it successfully, but since its inception in March, the program is going ahead without any problems.

This has helped euro-zone exports and lifted growth, and everybody including the ECB raised economic forecasts. However, ECB president Mario Draghi insisted that in order for the optimistic forecasts to become reality, the euro-printing program must continue as planned. More euros printed – less value for the euro.

Oil prices fell from over $100 to $42 in January and have since recovered to around $60. They will surely fluctuate but I don’t believe they will test the extremes anytime soon.

The big fall in oil prices came late in 2014. So, around the end of 2015, we will see headline inflation in the euro-zone beginning to rise as the year over year fall in the price of oil will not be felt like now.

Together with stronger exports thanks to a weaker euro, I believe that markets will begin speculating about an early exit of the ECB from its euro-printing program – a stronger euro. Even if they don’t speculate too much, the time of the exit, September 2016, will be getting closer.

The Greek crisis also played a role in weighing on the euro, but the effect hasn’t been strong like in 2012. I believe that Europe does what it always does: find a last minute solution or “kick the can down the road”. For those trading the euro, news about Greece is not too far from the back-burner.

This is my opinion and not advice. I think that we could see another fall in EUR/USD in the upcoming months due to the same factors that pushed it down so far: expectations for a US rate hike and the ECB’s determination to keep on printing euros.

But, towards the end of the year, the picture could become more balanced and this could push the pair higher. 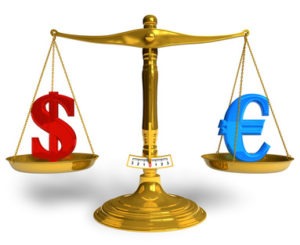 Just one year ago, EUR/USD traded at nearly 1.40. Since then, it has lost a lot of ground but managed to recover. Why did the pair fall so much, recover and what's next? Here is an overview and an outlook: EUR/USD fell from a peak of nearly 1.40 in May to 1.05 a few months ago, and it recovered only to 1.14.  The main factor pushing the currency pair down is: monetary policy divergence. Up to October, the US Federal Reserve was practically printing dollars (officially known as Quantitative Easing or QE), buying bonds and weakening the US dollar. Until…