Latest
You are at:Home»Forex News»Sterling set to shine if the opposition maintains its path

Boris Johnson’s first encounter with parliament has ended with a humiliating loss – but GBP/USD has finally been able to win. The new prime minister has lost control of the House’s agenda – and his party. In a 328 to 301 vote, MPs approved a motion to seize control of the agenda in order to force the government to avert a no-deal Brexit.

Sterling – which hit the lowest levels since 2016 early on Tuesday – was on the rise as it became clear that the opposition was on course to victory. And the pound has been extending its gains after the vote as well.

Former PM Theresa May suffered rebellions from Brexiteers – including Johnson – and now came the Remainers’ revenge. No less than 21 Conservative MPs – including former senior ministers – voted against the government. They were consequently expelled from the party. Even if they fight to remain Tories, Johnson has lost his majority in parliament after his colleague Phillip Lee jumped ship and joined the staunchly pro-Remain Liberal Democrats.

Another tumultuous day awaits traders in parliament as MPs will now debate the bill. The concise law forces the government to seek a three-month extension to Article 50 if parliament does not agree on a deal or leaving without an agreement by October 19.

The “rebel alliance” faces another law tabled by the government. The embattled PM responded to the loss by calling for a general election – as expected. He wants Brits to go to the polls on October 15 – just 16 days ahead of Brexit.

While opposition parties said they are willing to go to the country, they insist that their bill must be passed first. They pledged to vote against an election if the government brings its bill before theirs. According to the law, the government can change the election date after it has passed. By moving it to November, Johnson will be able to force a hard Brexit – and MPs do not trust the PM.

This sequencing is critical to the next move in the pound. If the rebels’ bill passes the Hosue of Commons, it will then need to be approved by the House of Lords and receive Royal Ascent. Only then, the opposition is willing to vote for an election.

If this plan goes forward, GBP/USD may shoot higher. If it is intercepted, the pound may plunge.

While deliberations in Westminster are set to dominate, other events may also move the pound. Markit’s Purchasing Manager’s Index for the services is expected to show that the UK’s largest sector is still growing – a score above 50. However, data for the construction and manufacturing sectors disappointed by falling deeper below 50 – reflecting contraction and a chance of recession.

Mark Carney, Governor of the Bank of England, will appear before a parliamentary committee later today to testify on the recent Quarterly Inflation Report. Carney and his colleagues will likely repeat their plain message – everything depends on Brexit.

The US dollar has been under pressure after US Manufacturing PMI missed with 49.1 points – contracting. Fears of a US recession are rising. Fedofficials have been sending mixed messages. 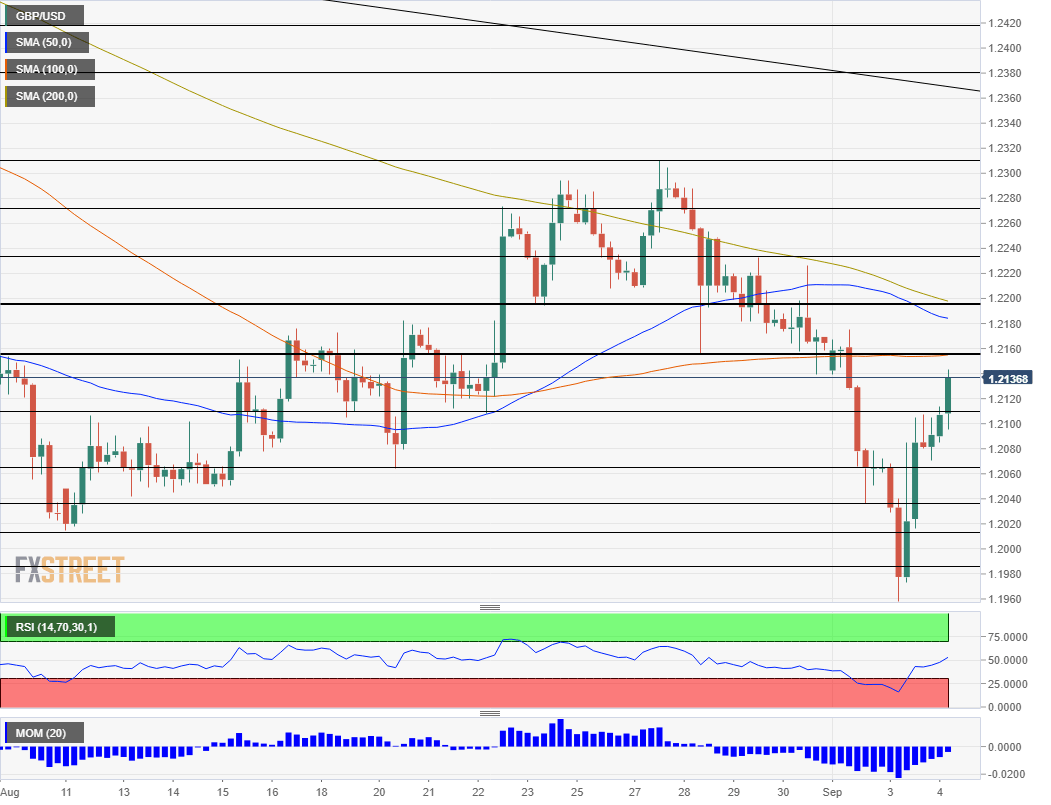 The Relative Strength Index (RSI) on the four-hour chart has risen above 30 – not reflecting oversold conditions anymore.

Get the 5 most predictable currency pairs
Previous ArticleBitcoin price prediction: BTC/USD takes a breather as it eyes levels above $11,000 – Confluence Detector
Next Article EUR/USD still room for a test of 1.0900 – UOB