Latest
You are at:Home»Crypto News»Top 3 Coins Price Prediction Bitcoin, Ethereum and Ripple: Bears may pull BTC down to $10,460

Bullish: Analyst says BTC/USD is due to repeat historical gains

In a recent Twitter thread, quant analyst PlanB discussed the increasing signs that show that BTC/USD is due to repeat historical gains. Pointing to the original incarnation of their stock-to-flow (S2F) model, PlanB noted that the time was right to start an order of magnitude step up.

The original S2F chart is a bit different from the more recent stock-to-flow cross-asset (S2FX) model. The latter incorporates macro factors and introduces “phases” in BTC’s trajectory as an asset. It also calls for an average BTC price of $288,000 before 2024.

Since the halving event in May, Bitcoin has put in “red dots” on the model, which have run to expectations, if not similar to what happened after the 2016 halving, as per a Cointelegraph report. Market analyst Michael Van de Poppe also sees the same pattern emerge from a technical analysis perspective.

When asked where the source of funds that will propel BTC/USD towards $100,000, PlanB pointed to a blog post about S2F and said that their hypothesis remained valid. The source would be “silver, gold, countries with negative interest rates [..], countries with predatory governments [..], billionaires and millionaires hedging against quantitative easing (QE), and institutional investors.”

Aviatrade, a private airplane sales agency, has recently unveiled a new payment platform to enable payments in Bitcoin and other cryptocurrencies for its multimillion-dollar aircraft – the Gulfstream G650ER.

The aircraft in question is a six-year-old plane and is the largest aircraft in the American manufacturer’s range. It’s priced at 3,859 BTC ($40 million). This move by Aviatrade shows how private airplane sellers are turning to cryptocurrencies to attract international buyers. According to a Business Insider report, Aviatrade’s president Philip Rushton said that cash payments would be subject to cross-border restrictions in a few countries. He added that buyers could save significantly by turning to an alternative method to fund such an expensive purchase.

Aviatrade is not the first enterprise to sell private jets for cryptocurrencies. Kaizen Aerospace, a company that deals with private jet sales, leasing and management, also accepts Bitcoin for all its services, according to a DeCrypt report.

We’re offering clients the opportunity to pay in Bitcoin and other cryptocurrencies for our services, whether they’re buying an aircraft, doing maintenance, chartering, or whatever, it may be. Because, if someone calls you on a Saturday for a charter, they can’t do a wire transfer.

Poli added that Bitpay had enabled around 15 transactions where cryptocurrencies have been used as payment for private jets. 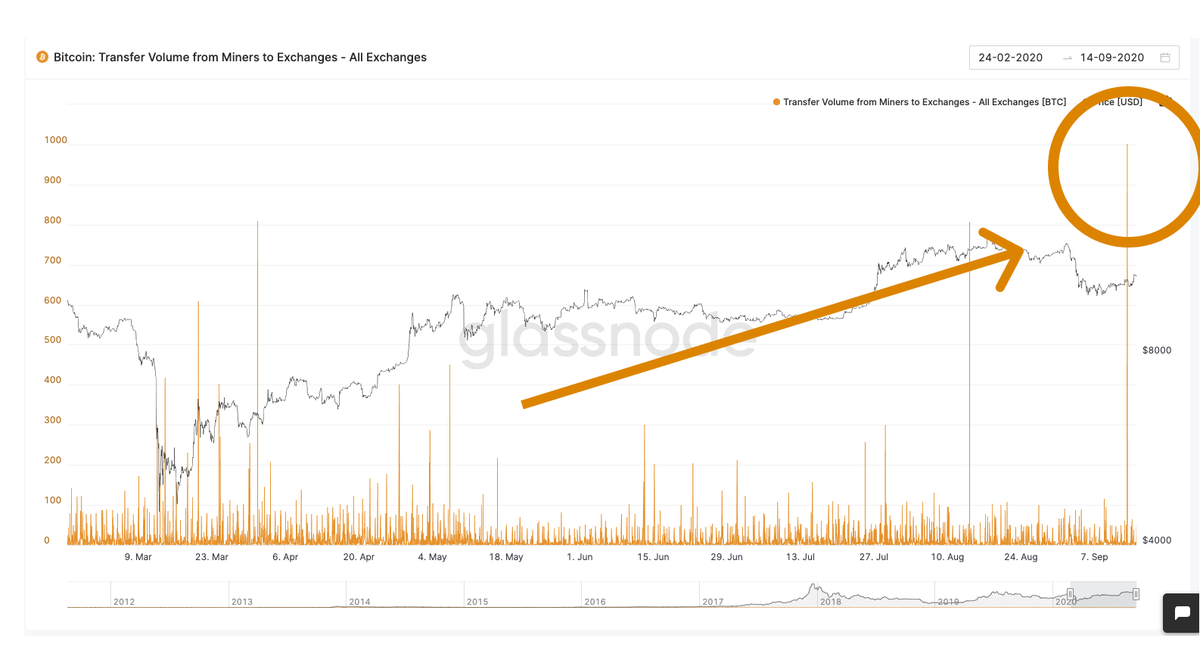 Glassnodes observed that there was a significant spike in the volume of BTC going from miners to exchanges. In other words, the miners are selling off their BTC to keep their businesses sustainable. Sure enough, the mining profitability chart paints a more precise picture:

The profitability chart has been trending around the all-time low levels for quite some time. To keep their operations viable, it makes sense why the miners have been selling their reserves. 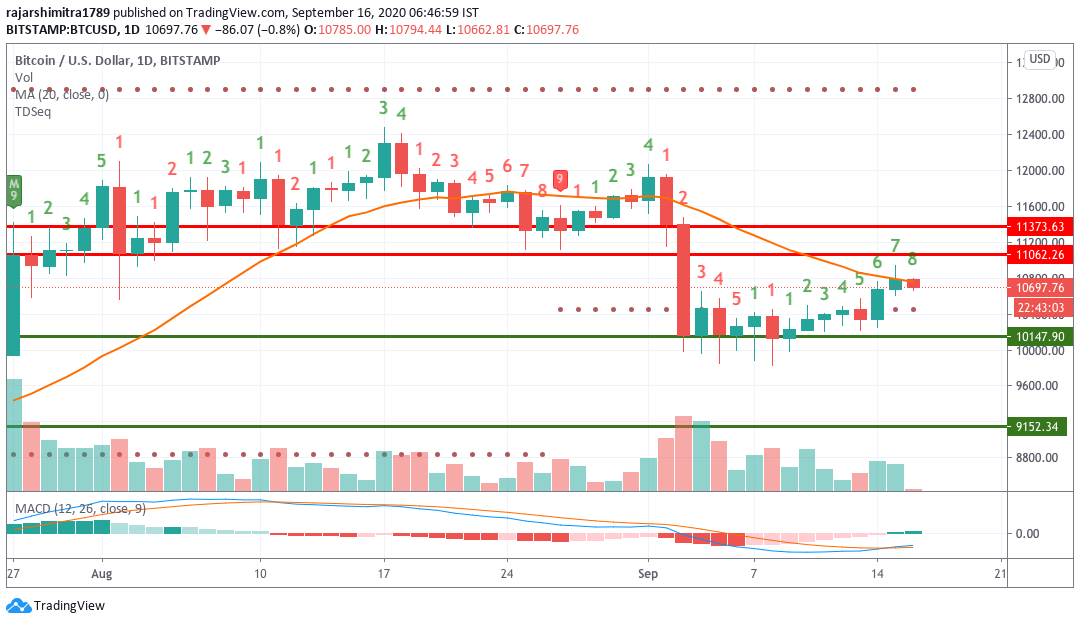 BTC bears have dropped the price from $10,795 to 10,148 after encountering resistance at the $10,795 line. The latest candlestick has been labeled green TD-8. This means that a proper bearish reversal is imminent. As per technical analysis, a future downtrend may take the price down to $10,460.

According to the IOMAP, if the bears take proper control now, they should conquer immediate support and bring the price down to $10,390. However, if the bulls were to regain control somehow and initiate a charge, they will be able to take the price up to $11,355 before meeting strong resistance.

Tether moves $1B worth USDT to the Ethereum network

Tether has recently altered its current circulating supply by 7%. This happened by moving $1 billion worth of USDT from the Tron network to the Ethereum network as collectively desired by traders in demand.

There appears to be no specific reason behind this swap as stablecoin issuers such as Tether and involved exchanges do not play a role in determining when a token swap takes place. The swap took place on September 15 and relied on an exchange to successfully offload.

Even as Ethereum is getting more congested, it is emerging as one of the most-loved blockchains for stablecoin traders who have once again initiated another stablecoin swap. Before this, the Tether network had transferred one billion USDT last month. This took place shortly after trading was launched on the OMG network.

If the demand continues to surge, more USDT might be issued to the Ethereum network soon. However, if encountered with congestion issues, then Tether might have to onboard to another exchange.

ETH 2.0 dev confirms that the upgrade is right on schedule

We can likely perform a feature freeze by mid-October, allowing us to only work on security improvements and UX before going live. If all goes well, November is still looking good for a launch from our perspective.

Jordan noted that the “checklist for ETH2 phase 0” has been going on with security audits, user interface adjustments, and other technical improvements to ensure the upgrade is ready. This comes shortly after Afri Schoedon said that ETH2’s beacon chain would likely launch in November.

The Ethereum 2.0 beacon chain will launch in November unless we find severe bugs in clients or protocol. I’m in-between Vitalk and Justin with my estimation here. I don’t think that we necessarily need to delay Ethereum 2.0 into 2021 unless we find critical issues. We are well on track for a late 2020 launch.

Schoedon is one of the many important Ethereum stakeholders who have asserted that a 2020 launch is possible and likely. The upgrade is expected to increase the decentralization of Ethereum and make it more efficient. 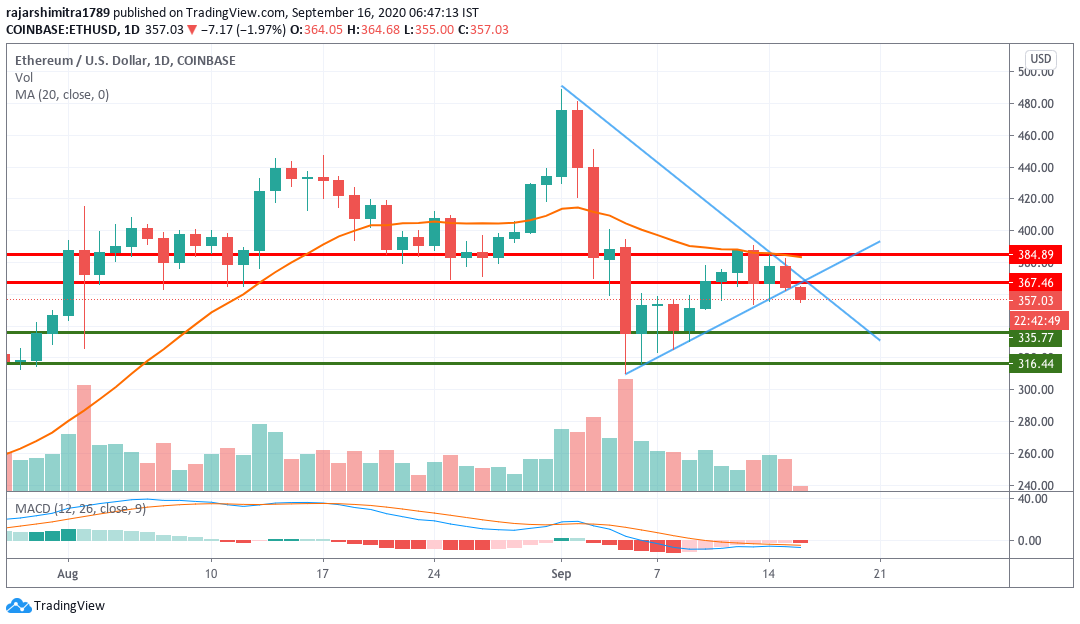 ETH/USD has dropped below the triangle formation as the bears have retained control over the last two days. During this period, the price has dipped from $377.50 to $359. The MACD shows increasing bearish momentum, so further downtrend can be extended. However, how far will the price drop? For this, we must consult the IOMAP.

The price can fall to $346.50 before it encounters healthy support. On the upside, the growth potential is capped at $370. However, it looks unlikely for the bulls to regain control any time soon. 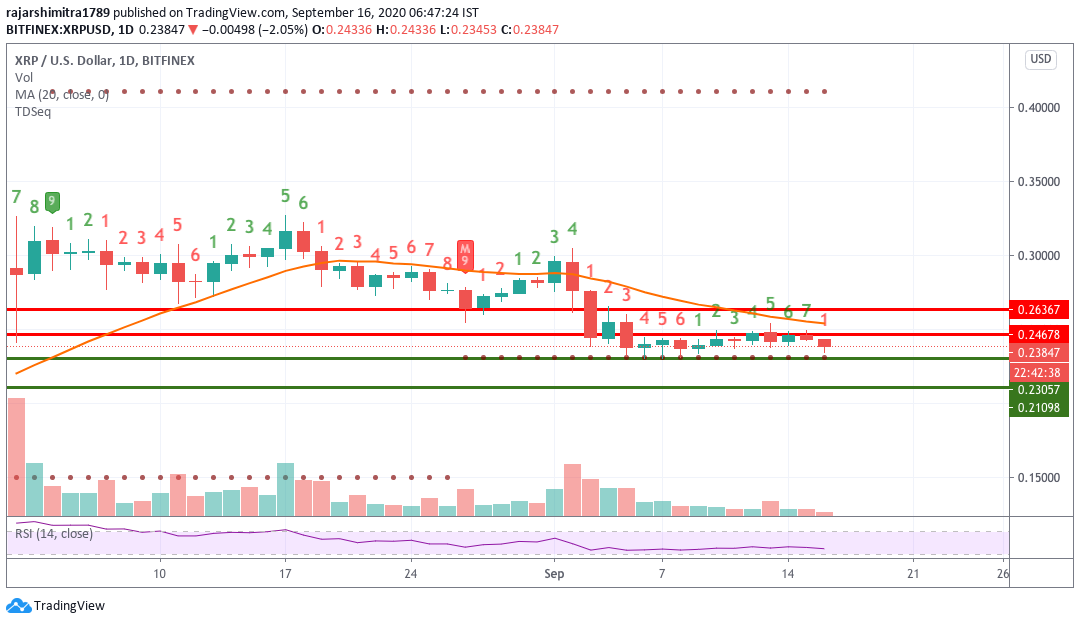 XRP/USD encountered resistance at the $0.247 line and has since dropped to $0.24 since yesterday. The relative strength index has not fallen to the oversold territory yet, so further downtrend is expected. The latest red candlestick has been labeled as TD-1, which shows that further downward movement is expected. This downtrend will take XRP/USD down to the $0.23 support level as per technical analysis.