US Fed’s quantitative easing to push more investors towards Bitcoin?

The US Federal Reserve has recently announced that it will keep interest rates near 0% through 2023 – a move that could potentially push more investors towards cryptocurrencies. The Fed noted that near-zero interest rates would likely help the US recover from the economic fallout from the COVID-19 pandemic.

With regard to interest rates, we now indicate that we expect it will be appropriate to maintain the current 0 to 0.25% target range for the federal funds rate until labor market conditions have reached levels consistent with the committee’s assessment of maximum employment and inflation has risen to 2% and is on track to exceed 2% for some time.

According to a Decrypt report, Charles Bovaird, Vice President of Content at Quantum Economics, said that the low-interest rates could make investors turn to non-interest-bearing assets like Bitcoin. In his opinion, investors drawn to certain assets because they pay interest will now have less incentive to invest their money into them.

The world of traditional finance has already been looking to gold and digital assets amid the pandemic’s economic fallout. A few days back, the correlation between gold and Bitcoin prices reached record-highs, indicating that the digital currency is becoming more of a safe-haven asset. That could continue if low-interest rates create a snowball effect.

BTC is in the early stages of a major bull market, Pantera Capital CEO

The US Federal Reserve recently said that it would keep interest rates near 0% through 2023. In a Blockchain Letter, Dan Morehead, the CEO of Pantera Capital, criticized the Fed’s quantitative easing and advised people to buy Bitcoin. He noted that corporate America is in for a brutal third-quarter earnings season while stocks continue to ignore the fundamentals and find new highs.

In response to Fed Chairman Jerome Chairman Powell’s monetary policy, Morehead advised people to buy Bitcoin. He explained how hard assets such as gold have been on a tear this year, unaffected by the pandemic’s fallout.

But cryptocurrencies have outperformed most other assets year-to-date, as features like scarcity are essential in a post-pandemic world, in Morehead’s opinion.

Pantera Capital believes Bitcoin is at the start of a bull run.

We strongly believe we are in the early stages of a large bull market fueled by both a powerful global macro tide and growing fundamentals in the underlying technology.

MicroStrategy purchases yet another $175M worth Bitcoin

MicroStrategy, one of the largest publicly traded business intelligence firms, has recently bought another $175 million worth of Bitcoin. This brings the company’s overall Bitcoin purchase to a soaring $425 million. Michael Saylor, MicroStrategy’s CEO, took to Twitter to share the news.

In August, MicroStrategy had announced its initial $250 million Bitcoin investment. In a press release, the firm had noted that Bitcoin is a better store-of-value asset class than fiat currencies, especially given the global economic fallout caused by the pandemic. The company now views the leading cryptocurrency as “the principal holding in its treasury reserve strategy.”

According to a CoinDesk report, Saylor said that the BTC purchase is a long-term, multi-generational investment.

This is not a speculation, nor is it a hedge. This was a deliberate corporate strategy to adopt a Bitcoin standard.

The CEO also mentioned that MicroStrategy started to see cash as a potentially expensive storage method for surpluses. He said that Bitcoin and stock buybacks are the only two quality places to direct surplus funds.

We just had the awful realization that we were sitting on top of a $500 million ice cube that’s melting. 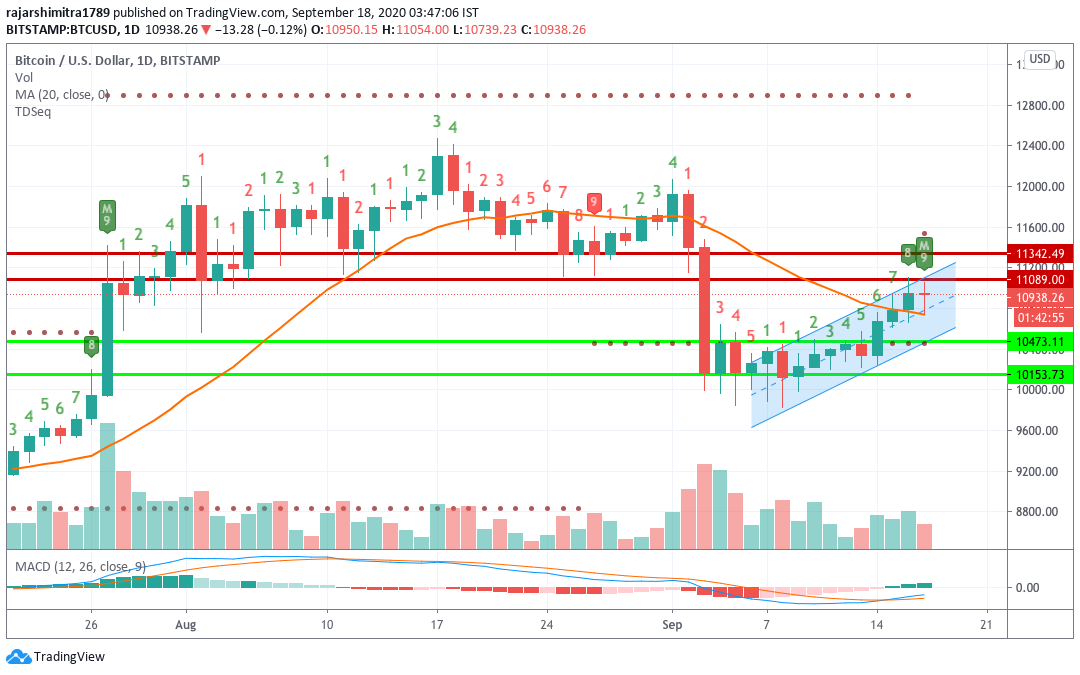 BTC is on the verge of forming an evening star pattern as the bears eked out an advantage over the bulls after three consecutive buyer-heavy sessions. BTC has formed the bearish flag pattern. If the bulls somehow sustain their positive momentum, they have the space to grow till $11,100. After encountering resistance at the upward trending line, the price will probably fall to the $10,475 support line.

The latest candlestick has the green-9 label, as per the TD pattern. This also indicates that the price has finished its current upward trend and may fall soon. The bears will probably aim to take the price down.

However, the BTC IOMAP shows a glimmer of hope for the bulls.

As you can see, BTC is sitting on top of a healthy support line. BTC bears can drop the price to $10,600 before it encounters a strong support wall. On the upside, BTC faces a week-medium resistance line. If the buyers retain their momentum, there is a good possibility of BTC breaking above the aforementioned flag pattern and go up to $11,275 before it meets a strong resistance wall.

Bitcoin’s daily active addresses had crossed a million three out of the last four days. This sustained engagement shows that the BTC network is currently very healthy, which is usually a bullish sign. 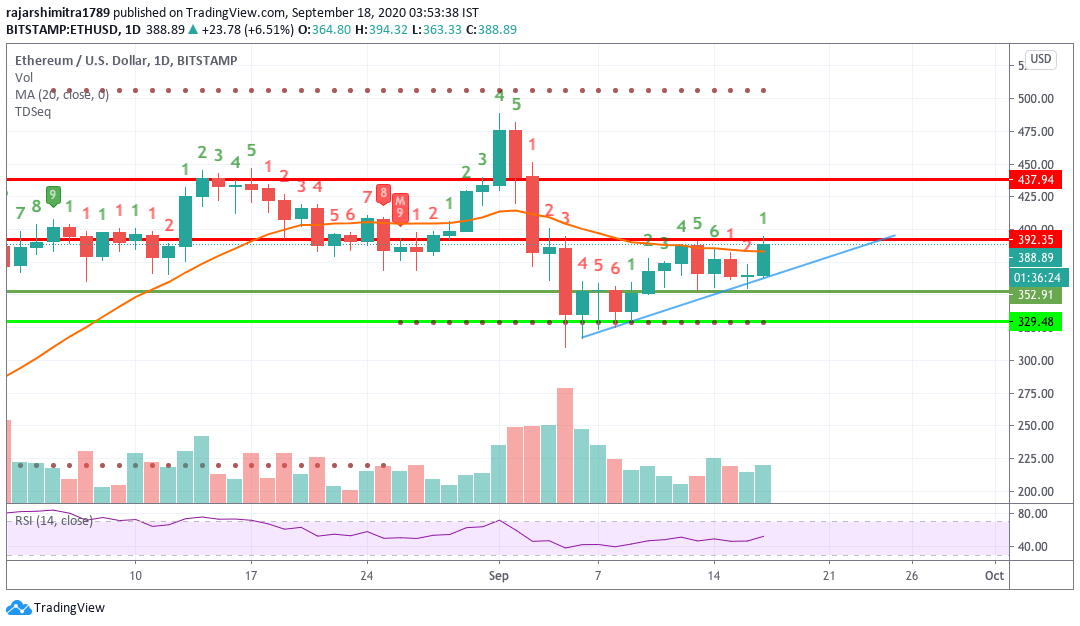 Ethereum has charted the morning star pattern as the price went up from $365.65 to $390, breaking above the SMA 20’s resistance in the process. There is every chance for the price to jump up and breach the $400-level. The price has been consolidating in an ascending triangle pattern, as it preps for a breakout. The latest candlestick has the green-1 label in the TD pattern, which indicates that the price has started an upward trend. The relative strength index (RSI) is trending hovering in the neutral zone, giving ETH more room for growth.

The ETH IOMAP makes for pretty interesting reading. The downside potential of the price is heavily limited by the $389.50 to $378.75 support wall. On the upside, the buyers face a medium-to-strong resistance wall between $390.80 to $401.50. However, if the price break past this level, as we think it will, ETH has room to grow till $425 till it encounters another similar resistance level of note.

There has been a recent spike in holders with 1-10 coins and 10-100 coins. This could either be a direct result of the DeFi craze, or it could also mean that investors are strengthening their position before the ETH 2.0 upgrade. This is also a positive sign.

Popular analyst explains why XRP is a better asset than BTC

A popular cryptocurrency analyst who goes by the name “CryptoWhale” took to Twitter to explain the advantages XRP has over other digital assets.

CryptoWhale further explained why, despite its fundamental strengths, XRP has a lot of naysayers. The analyst noted that a majority of XRP investors fell victim to the “FOMO” during the “2017 pump and dump.” This caused many to hate the asset and create a subconscious prejudice towards XRP.

CryptoWhale mentioned that they believe XRP will eventually rise from the ashes.

Nevertheless, the analyst highlighted that now is not the time to accumulate XRP. They said that the entire cryptocurrency market is due for one more capitulation with Bitcoin leading the plunge. CryptoWhale plans to increase its XRP exposure only after the correction is over.

XRP/USD bulls have stayed in the control of the market after the price bounced up from the upward trending line. In the process, the price went up from $0.243 to $0.2525 over the last two days. XRP/USD is presently trending in a bearish flag pattern. The buyers have the room to grow the price till $0.265 before the price encounters resistance at the upward trending and falls down. Investors may use this opportunity to strengthen their positions and sell-off at the $0.265-levels to profit.

Ripple’s on-chain development activity has seen a pretty impressive rise in recent times, which shows that the network is presently healthy and growing. This is a bullish sign.

MicroStrategy, a publicly-traded business intel firm, has recently bought an additional $175 million worth of Bitcoin.  US Federal Reserve’s quantitative easing through 2023 may push more investors to Bitcoin. Analyst CryptoWhale cited four reasons as to why XRP is better than BTC.  Bitcoin US Fed’s quantitative easing to push more investors towards Bitcoin?  The US Federal Reserve has recently announced that it will keep interest rates near 0% through 2023 - a move that could potentially push more investors towards cryptocurrencies. The Fed noted that near-zero interest rates would likely help the US recover from the economic fallout from the…