It was a quiet week for USD/CAD, which showed small gains. There are four releases in the upcoming week, including the Bank of Canada rate decision. Here is an outlook at the highlights and an updated technical analysis for USD/CAD.

In Canada, the BoC business outlook survey found that business sentiment in Canada was “strongly negative”, even though half of the companies surveyed said they expected sales to recover within 12 months. The bank found that the business sector has been hit hard by the economic shutdown in the wake of Corvid-19, as well as the sharp decline in oil prices. The week wrapped up with mixed employment data. The economy created 952.9 thousand jobs in June, easily beating the estimate of 700.0 thousand. The unemployment rate fell to 12.0%, down from 13.7%. However, this was higher than the estimate of 12.3%.

In the US, the services sector showed a strong rebound in June. The ISM Non-Manufacturing PMI jumped to 57.1, up from 45.4 beforehand. This reading showed significant expansion. Unemployment claims continue to fall, albeit at a slow rate. Last week’s reading was 1.31 million, down from 1.42 million. The Producer Price Index disappointed. The headline read came in at -0.2%, while Core PPI declined by -0.3%.
USD/CAD daily chart with support and resistance lines on it. Click to enlarge: 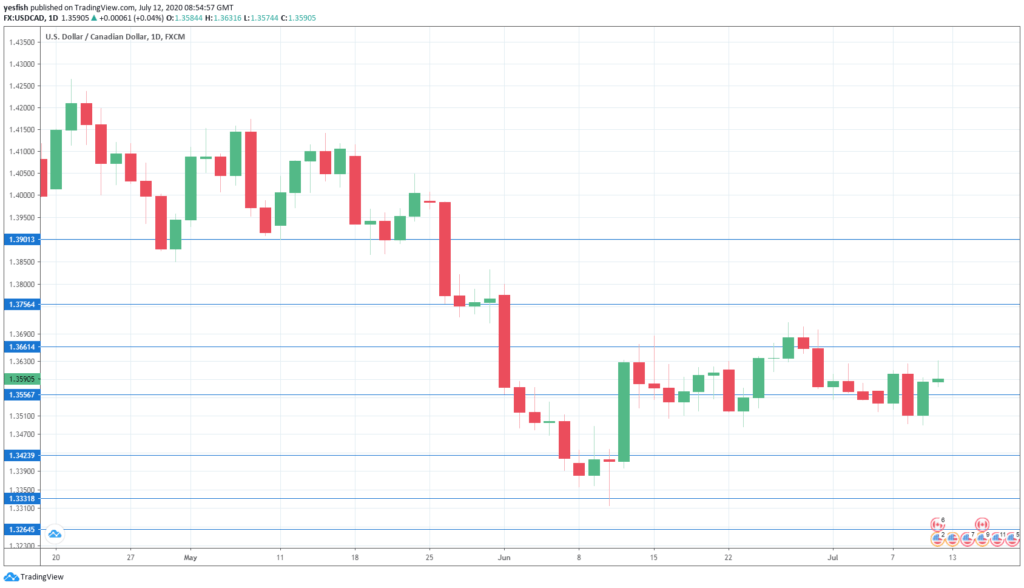 We start with resistance at the round number of 1.39. This line has been a resistance line since late May. 1.3757 is next.

1.3661 (mentioned last week) continues to be a resistance line.