Latest
You are at:Home»Opinions»USD/JPY finds new reasons to fall

This was the week: Fed goes dovish

After Powell offered patience and opened the door to changing the balance sheet policy, Fed officials took further steps to the dovish side, weighing on the US Dollar. Atlanta Fed President Raphael Bosticis already playing with the idea of cutting rates. His speech sent the dollar down. Eric Rosengren of the Boston Fed was upbeat on the economy but also willing to listen to markets very carefully.

And the FOMC Meeting Minutes also tilted to the downside, echoing Chair Powell’s words regarding patience on raising rates. The seemingly-coordinated media appearances sent the US Dollar down and supported stocks.

Powell then returned to the scene and reiterated his message of patience regarding raising rates, adding that there is no specified amount of rate hikes on the cards. Vice Chair Clarida said that the economy could withstand inflation a bit above 2% for some time, echoing the message of patience.

Official talks between the US and China over trade resulted in progress but no accord. The world’s top economies will continue talking. The news provided some relief to markets and the currency pair.

In the meantime, there are more signs of an economic slowdown in China. The Producer Price Index slowed down sharply to 0.9% in December, reflecting a lack of demand and triggering worries.

North Korean Leader Kim Jong-un traveled to Beijing and met President Xi Jinping. Both support another meeting with US President Donald Trump amid a deadlock in talks. This geopolitical topic remains a sideshow for financial markets.

Circling back to the US, Trump cut short a meeting with Democratic Congressional leaders Nancy Pelosi and Chuck Schumer. The White House insists on funding for a border wall, and the opposition is opposed to it. Talks continue. The ongoing shutdown slightly does not weigh heavily on the pair so far.

US data was mostly OK.

US events: Focus on the consumer

The week begins with a US bank holiday on Monday. Things warm up with the Producer Price Index report on Tuesday, where annual price rises are not expected to move from 2.5% on the headline and 2.7% on the core.

The most significant release is on Wednesday, with the Retail Sales report for December. Back in November, the volume of sales increased by 0.2% on the headline and the core but jumped by no less than 0.9% on the Control Group – the core of the core. The increase may have been related to a longer Black Friday week than usual. Did American consumers continue shopping into Christmas? The data will provide answers.

Housing data is due on Thursday, and industrial output on Friday may provide further information about the economy but the last word of the week belongs to the University of Michigan preliminary Consumer Sentiment report for January. Consumers’ mood is off the highs but remained upbeat with a score of 98.3 in December.

The government shutdown has been mostly ignored by markets so far. As government employees do not receive their paychecks, there could be some damage to the economy. The talks between Trump and Democrats could have a broader impact on the US Dollar.

Also, it is always worth keeping an eye open for political developments around the Mueller Investigation which produces more revelations on a weekly basis. 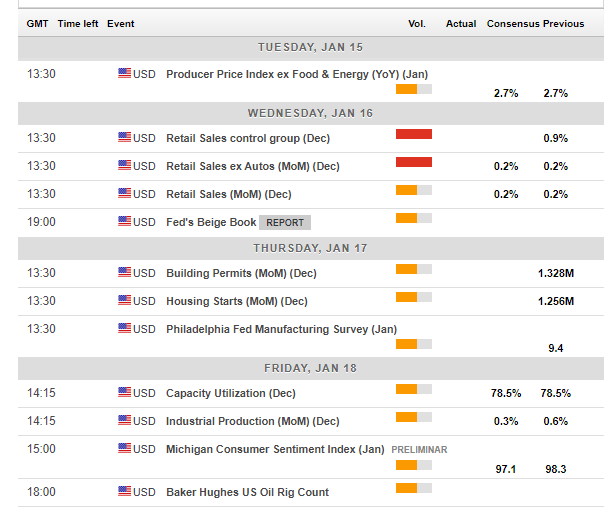 The Japanese yen’s haven status did not come into play as markets advanced gradually, but any upswing in volatility may strengthen the correlation between share prices and the value of USD/JPY.

Brexit may have an impact on the yen. The UK Parliament is set to vote on Tuesday, and the government is likely to fail. There are various scenarios in such a case a hard-Brexit is one of them. If the UK leaves the EU without a deal, it would have ramifications not only on Britain but also on the euro-zone and the global economy. Rising prospects of this dreaded outcome could boost the Japanese currency.

Japan releases the national inflation measures for December, which will likely see core inflation far from the 2% target. It stood at 0.8% in December. Industrial output is also worth mentioning after the slowdowns in China and Europe.

All in all, stock markets and geopolitics will have their say for the yen. 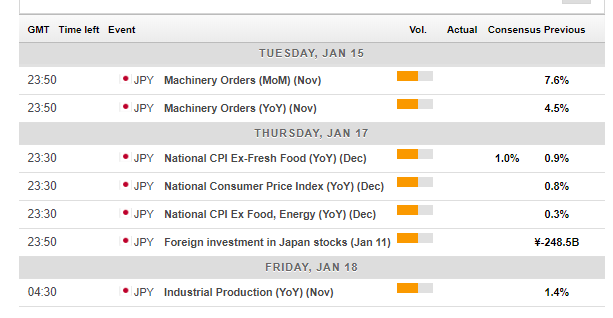 USD/JPY is clearly trending lower, with Momentum pointing in that direction. The pair is also trading below the 50-day and 200-day Simple Moving Averages. The Relative Strength Index is just above 30, thus not reflecting oversold conditions. It indicates further drops are possible.

108.10 provided support back in late May and remains relevant. More significant support is at 107.80, a swing low seen this week. 1.07.50 was the first support line after the flash crash. The next line is 106.55 which was a stubborn support line back in April last year. The round number of 105.00 is eyed by the BOJ, and it is closely followed by the flash-crash low of 104.87. 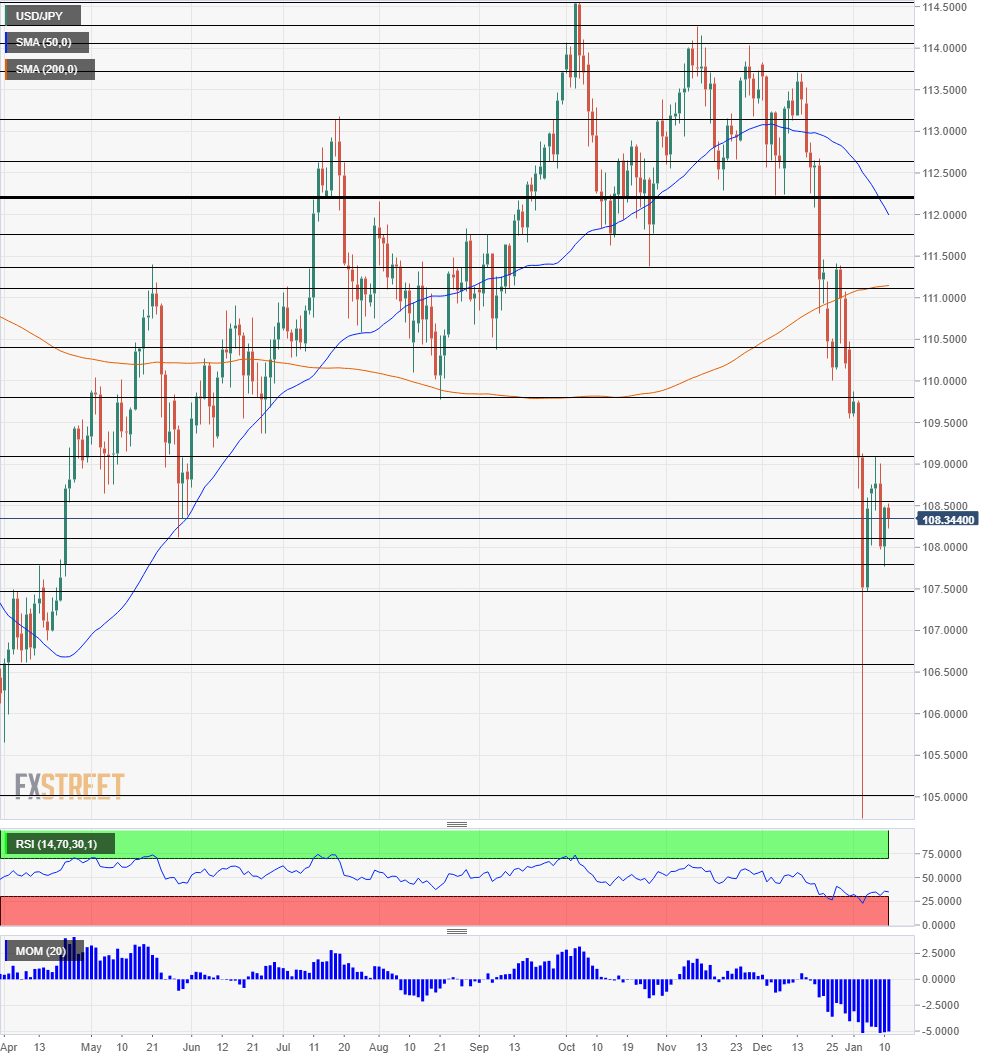 While the stability in stock markets supports the pair, the global economy is still slowing US-Chinese talks will take more time. Joined by the dovish Fed, there is room for further falls for dollar/yen.

Get the 5 most predictable currency pairs
Previous ArticleUK: Economy grows by 0.2% in November – ING
Next Article WTI climbs to 5-week tops above $ 53, US drilling report eyed