Latest
You are at:Home»Opinions»USD/JPY has more room to fall on trade wars

When the going gets tough, the tough get going. As the US-Sino trade war turned into a currency war, the Japanese currency emerged as a winner and USD/JPY as a prominent barometer of sentiment. The ongoing spat is set to dominate trading again, with US consumer data having its say as well.

Chinese President Xi Jinping is unable to respond to his counterpart Donald Trump with counter duties. As China has a trade surplus with the US, it has fewer American imports to slap tariffs on. However, he managed to hit Trump, where it hurts. China has unleashed its currency to hit back at America’s new levies and markets tumbled.

The ensuing rush to bonds has hit USD/JPY in two ways. First, the yen remains the ultimate safe-haven that is sought in times of trouble, and the currency rallied across the board. Second, the rush to US Treasuries has pushed yields lower, now reflecting a 100% certainty of the Federal Reserve following up with another rate cut – thus waiting on the dollar.

Weakening the yuan may curb the impact of tariffs and help exporters – but it also risks capital outflows out of the world’s second-largest economy. Beijing has sought to stabilize the currency and helped markets recover. However, both economic giants have also clashed around Chinese buying of US agrifoods and American licenses for Huawei – both halted for now.

The intensifying trade war and the resulting revaluation of the Japanese yen have stoked fears of intervention from the Bank of Japan. A drop below 105 may reignite such fears or trigger warnings from officials in Tokyo.

The US ISM Non-Manufacturing PMI has added to the pressure as it missed expectations with 53.7 points. On the other side of the Pacific, Japan reported surprisingly strong growth of 0.4% in the second quarter, marginally reducing chances of further stimulus from the BOJ.

US events: Consumer and trade

Every tweet from Trump and comments from Chinese officials will likely rock the greenback, and so will the actions of both economic giants. Optimism towards the potential resumption of talks in September may boost the pair while any escalation can weigh on it.

The Federal Reserve has cited trade tensions and low inflation as reasons for its recent rate cut – and it will receive fresh Consumer Price Index figures on Tuesday. The most critical data point is Core CPI yearly, which is projected to remain unchanged at 2.1%.

Consumption – which has been one of the economy’s strong points – will be tested on Thursday and Friday. First, retail sales are projected to have risen by a more modest pace in July after substantial advances in June. The control group is the critical number to watch, and revisions to past data can have an impact if the actual figures meet expectations.

And finally, the University of Michigan’s Consumer preliminary Sentiment Index for August is also set to moderate – yet remain at healthy levels. Other releases such as industrial output and unit labor costs may also move USD/JPY. 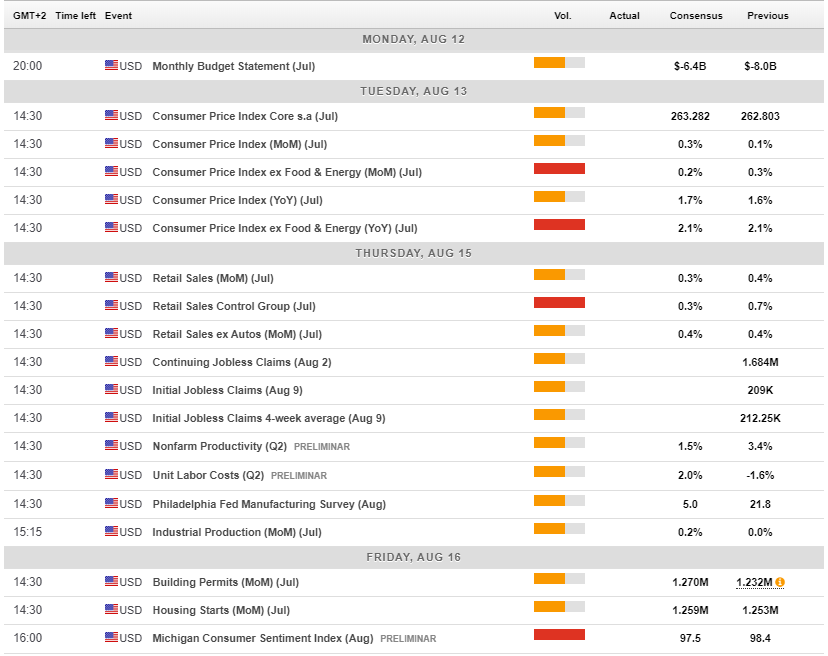 The yen remains the ultimate safe haven, and its movements heavily depend on trade tensions described in detail earlier. Developments around North Korea and Iran – which have been on the back burner of late – may also impact the Japanese currency.

The highlight on the Japanese calendar is industrial output for June, which carries expectations for another fall. Foreign investment and machinery orders are also of interest.

Dollar/yen is suffering from downside momentum on the daily chart and remains depressed after losing an uptrend support line that accompanied it since late June. On the other hand, the Relative Strength Index is close to breaking below 30 – and that would indicate oversold conditions, suggesting a bounce.

105.50 is a critical line of support after holding USD/JPY from falling further this week. The round number of 105.00 is a round, psychological number that may trigger stop-loss orders. The flash crash low of 104.75 that dates back to January is another significant support line. Lower, 103.60 is noteworthy. 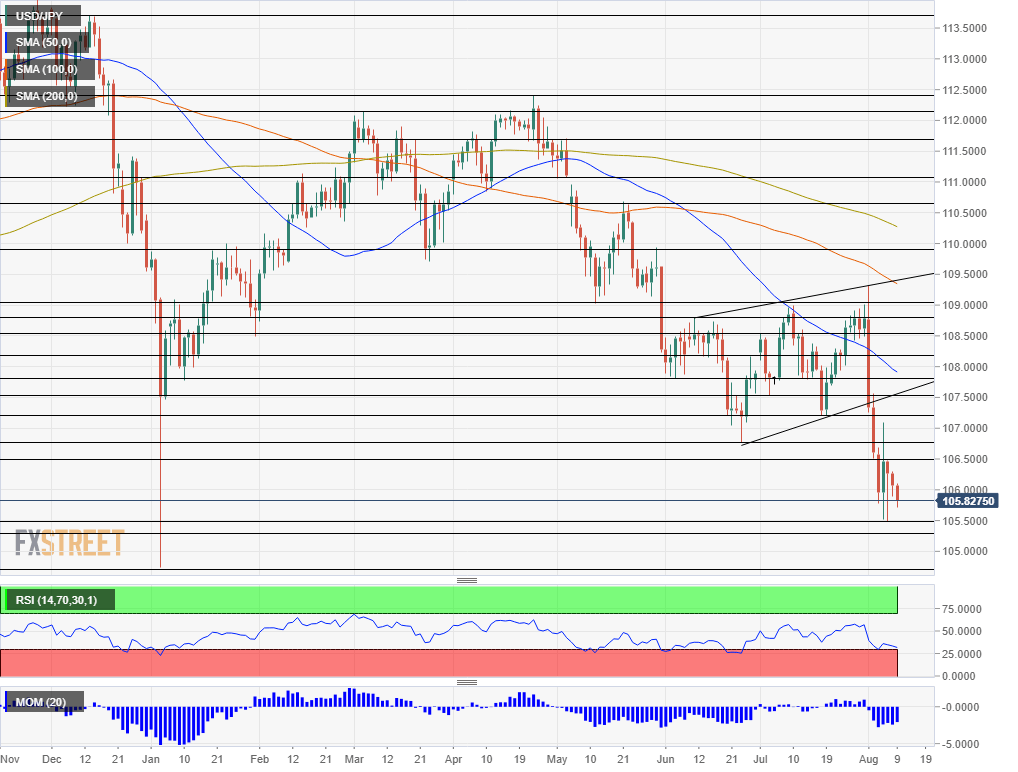 Without any significant positive turn in the US-Sino trade war, it is hard to imagine any long-lasting upside move. Profit-taking and oversold conditions may help only in the short-term and so can the data – which may also weigh on the dollar. Overall, there are higher chances for further drops than a recovery.

Get the 5 most predictable currency pairs
Previous ArticleUSD/JPY drops toward 105.50 as Trump comments send T-bond yields lower
Next Article Bitcoin Price Top Forecast: Safe-haven or a high-yield asset? Bitcoin qualifies for both