Latest
You are at:Home»Opinions»USD/JPY may extend gains if Brexit passes

USD/JPY kicked off the week, eyeing the US-Sino trade deal with skepticism. The “Phase One” handshake accord still needs to be written, skips the most sensitive topics – and leaves the December 15 tariffs on the table. Moreover, while American officials expressed satisfaction, China’s response was colder. However, Beijing gradually warmed up and shared the optimism – pushing the safe-haven Japanese Yen lower.

In the meantime, China reported the slowest growth level since the 1990s – an annual increase of only 6% in Gross Domestic Product in the third quarter. The silver lining was a surprising acceleration in industrial output in September – 5.8%. The world’s second-largest economy continues experiencing a slowdown.

The UK and the EU have reached a trade deal, and the news affected markets well beyond the UK. The risk-on mood weighed on the safe-haven yen and sent USD/JPY close to 109. The gains were limited by concerns that parliament will vote down the deal in its sitting on Saturday. At the time of writing, Prime Minister Boris Johnson is trying to convince MPs to back the plan. The Democratic Unionist Party’s rejection makes his task harder.

US Retail Sales missed expectations, with the all-important control group remaining flat in September. The US consumer has been pushing the world’s largest economy forward, and a pause in the shopping spree caused some concern. Other figures, such as Building Permits, Housing Starts, and Industrial Production, were mixed.

James Bullard, President of the Saint Louis branch of the Federal Reserve, has said that further cuts are possible. Bullard is known as a dove and voted in September for cutting rates by 50 basis points, double the standard 25bp. His lack of a clear conviction that further loosening is needed contributed to lower expectations for another move.

John Williams, Bullard’s peer at the New York Fed, expressed optimism and also seemed somewhat reluctant to cut rates. Ahead of its October 30 decision, the Fed enters its “quiet period” in which officials refrain from public appearances.

The International Monetary Fund has released fresh growth forecasts, and these included broad downgrades. Global growth for 2019 is now seen at 3% against 3.2% in the previous assessment, a multi-year low. The report presented by Kristalina Georgieva, the new Managing Director, has somewhat weighed on sentiment.

US events: Watching durables, housing, and the global mood

The critical vote in the UK parliament on Saturday will likely set the tone for all markets when the new trading week kicks off. If the House of Commons approves the accord, USD/JPY may get carried higher on the risk-on sentiment. In case of a rejection, an extension to Brexit and new elections are likely, but other scenarios are also in play.

Headlines related to ongoing deputy-level trade talks may rock markets. Investors want to see the US call off the next round of tariffs due on December 15. Other topics such as China fulfilling its promise to buy US agrifoods, restrictions on Huawei, and intellectual property are on markets’ minds.

The economic calendar kicks off with Existing Home Sales for September, which have recovered from the lows and are set to remain around August’s level of 5.49 million annualized. Another housing figure is due out on Wednesday, but the main events are scheduled for Thursday.

Durable Goods Orders reflect investment – which is the weak spot in the US economy. The most significant figure is Nondefense ex-Aircraft, which dropped by 0.2% in August. An increase in September would encourage officials and may boost the dollar. Headline orders and orders excluding transport are also of interest.

Markit’s preliminary Purchasing Managers’ Indexes (PMIs) for October usually carry less weight than the ISM PMIs. However, indicators for both the services and the manufacturing sectors are on the brink of the 50-point threshold that separates expansion from contraction. A drop below this bar may weigh on the greenback.

Shortly after the PMIs, New Home Sales are predicted to show a drop in September after a leap in August. Sales of new units trigger more economic activity than those of second-hand homes. 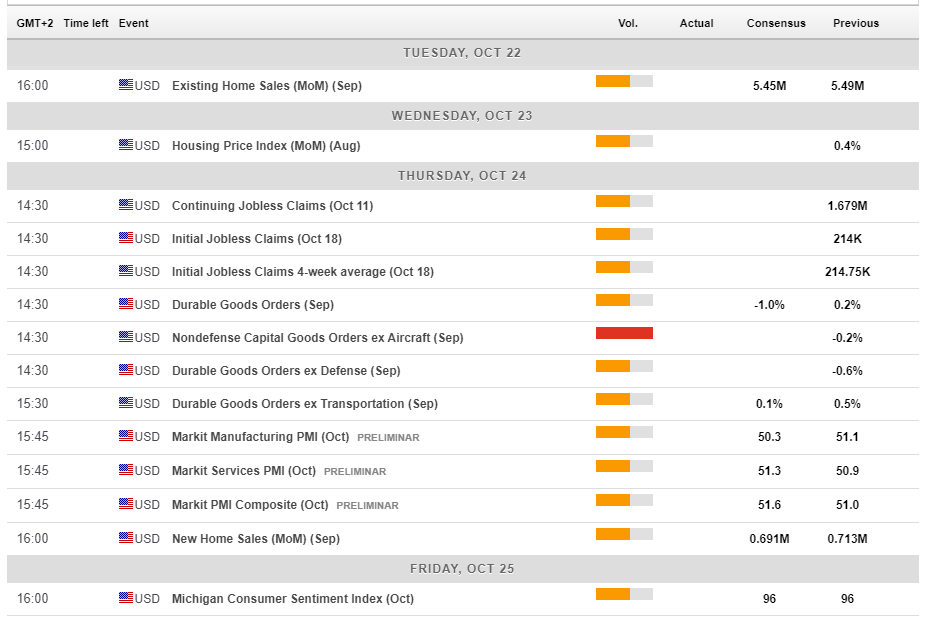 The yen remains the ultimate safe-haven currency and is set to move on trade and Brexit developments before anything else. Other global worries include the clash between Turkey and Kurdish forces in northern Syria. If it spills to other parts of the Middle East, the currency may benefit. Closer to Japan, North Korea has been off the radar but may perform further missile tests. That could aggravate tensions and also boost the Japanse currency.

Japan publishes trade data early in the week, and substantial drops in both exports and imports are expected. The data may confirm concerns about falling global growth and paradoxically support the yen. The All Industry Activity Index and foreign investment figures are also of interest.

USD/JPY is enjoying upside momentum on the daily chart and has crossed the 108.50 level – which was a considerable resistance line, now serving as support. On the other hand, the currency pair is capped under the 200-day Simple Moving Average, which is at around 109.10. Overall, bulls have an advantage but are not in full control.

Looking down below 108.50, the next cushion awaits at 108.15, which limited USD/JPY’s gains in late September. Next, 107.50 is where the 100 SMA meets the chart, and the level also provided support in July. The round number of 107 provided support in September and held it down in August. Lower, 106.50 is October’s low point. 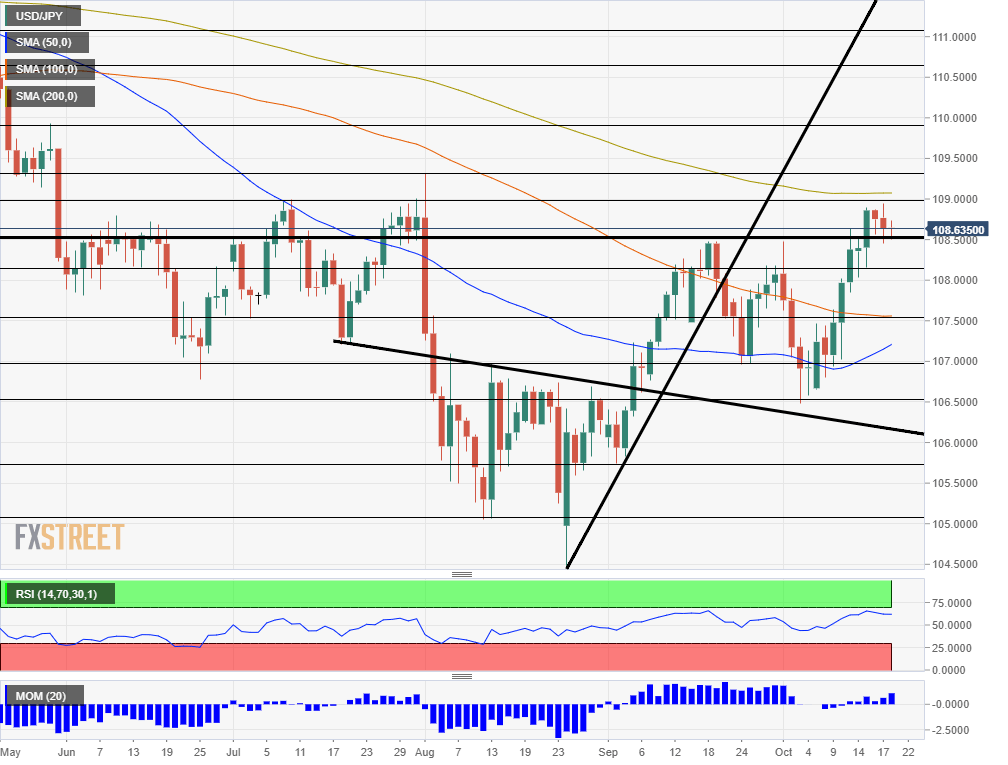 The next immediate move hinges on the UK parliament – which is hard to predict. The bigger picture is of a slowing global economy, and that points to falls in USD/JPY.

The FX Poll is showing a moderate bullish bias in the short term and substantial fall afterward. The short-term target has been significantly upgraded while the medium and long term outlooks are only moderately higher. It seems that experts have doubts about the sustainability of the uptrend. 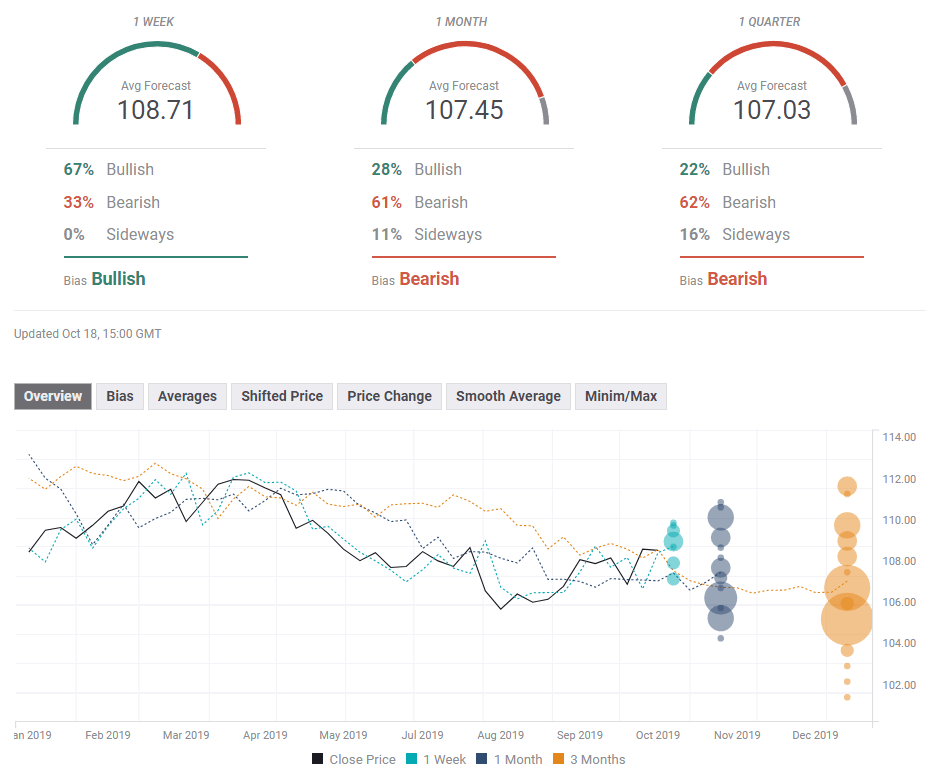