Latest
You are at:Home»Opinions»USD/JPY may extend its falls alongside trade wars

China is not alone in suffering US threats of tariffs. Nor is the EU. President Donald Trump has reopened the old front against Mexico by announcing duties as a punishment for allowing migrants from Central America to flow into the US – just as he asked Congress to ratify the 2018 trade agreement with Mexico and Canada (USMCA).

The news came on top of the intensifying trade war with China. The world’s second-largest economy is not sitting still and is moving towards limiting exports of rare earth – where China is the dominant player. Moreover, Chinese manufacturers are concerned about the recent escalation and have sent the official purchasing managers’ index lower. Chinese counter-tariffs come into force on June 1st.

These developments sent the safe-haven yen significantly higher, and for USD/JPY, weakness in yields also took its toll. US GDP was marginally revised down to 3.1%, but the inflation component provided a nasty surprise with a slide to 1% annualized. US bonds were already in demand as a shelter against a worsening global outlook and saw further flows on lower inflation. The consequent fall in yields pushed the greenback lower – a vicious cycle for dollar/yen.

In Japan, Bank of Japan Governor Haruhiko Kuroda reiterated his pledge to reach the elusive 2% inflation target. However, fresh inflation data from the Tokyo region for May showed that core inflation is going in the wrong direction – 1.1% instead of 1.3% expected.

Overall, May has ended as it began – with doom and gloom dominating markets.

US events: Full buildup to the Non-Farm Payrolls and trade

Relations between the US and China will probably remain in the spotlight for some time. The US dollar may rise if tensions defuse – if both countries announce a summit between the presidents – or by simply refraining from new measures.

On the other hand, the yen may gain if relations further deteriorate – and the list is long. China may move forward with reducing purchases of US agricultural and energy products, limit exports of rare earth, or give a hard time to US companies operating in the country.

The US may escalate tensions by announcing new tariffs, holding new “freedom of movement” maneuvers in the South China Sea, or by upping the ante – an angry tweet from Trump can sour the mood.

ISM’s manufacturing purchasing managers’ index kicks off the week and carries expectations for an increase from the lows of 52.8 points – reflecting a pick up in growth and also in hiring.

The next essential figure to watch is ADP’s private sector jobs report scheduled for Wednesday. After a whopping leap of 275K in April, the payroll firm’s number is set to print job growth, which is more in line with the average – around 200K. The middle of the week also features ISM Non-Manufacturing PMI. America’s services sector is growing at a satisfactory pace, and another increase is projected. The employment component serves as another hint towards the NFP.

Thursday is devoid of critical data but remains busy with trade numbers and productivity in focus.

And finally, it’s jobs Friday. After a dip in February, the numbers for March and April beat expectations, with the latter printing 263K positions gained in the US economy. Economists forecast a more modest increase of around 200K jobs – similar to the ADP number.

The unemployment rate is expected to tick up from the historic low of 3.6% seen in April, and wage data may steal the show. Average hourly earnings carry expectations for a monthly rise of 0.3% in May after 0.2% in April, while year on year growth is projected to remain at 3.2%.

The NFP data is a critical input for the Fed that meets later in June to determine interest rates. Wage inflation is needed to convince the central bank that it is on course, to reach its target of 2%. 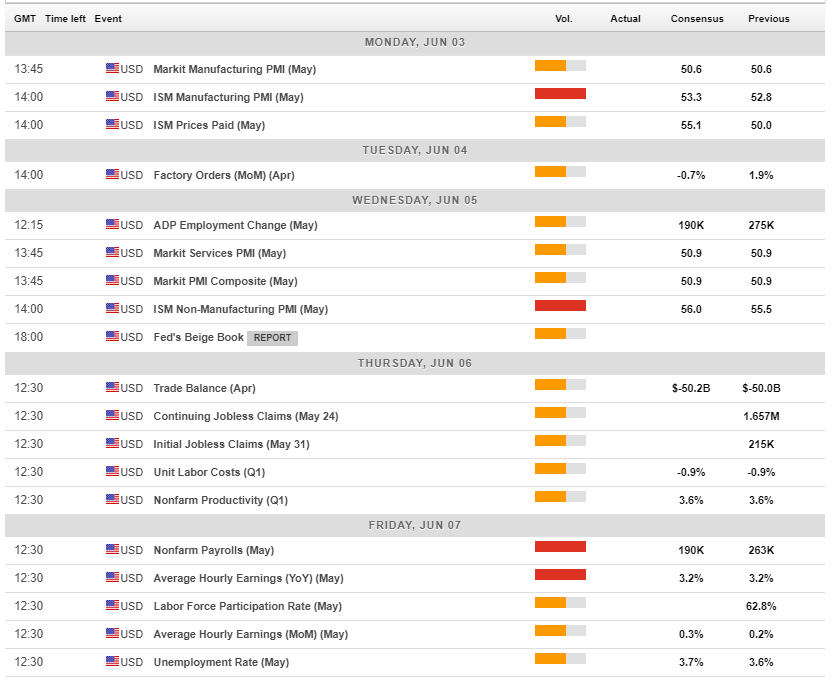 The Japanese yen has no competitors in times of trouble. Another escalation in the various trade wars may extend the yen’s rise.

The Japanese economic calendar features foreign investment data, householding spending, and the leading economic index, and all are projected to have a limited impact on currencies.

Developments around North Korea may have an impact on the yen. The rogue nation’s regime has reportedly executed the chief negotiator with the US after talks broke down. If Kim Jong-un orders nuclear or ballistic missile tests, it could add to trade issues and push the yen higher.

Dollar/yen failed in its attempt to recapture the downtrend resistance line and fell to new lows. The loss of the uptrend support line in early May proved critical also at the end of the month, as the downtrend continues.

USD/JPY is trading below the 50, 100 and 200-day Simple Moving Average, suffers from downward momentum and is pressured by the falling Relative Strength Index – which is holding above 30 – not reflecting oversold conditions just yet.

The bearish chart may receive another indicator in the upcoming week if the 50 SMA falls below the 200 SMA – the death cross pattern. 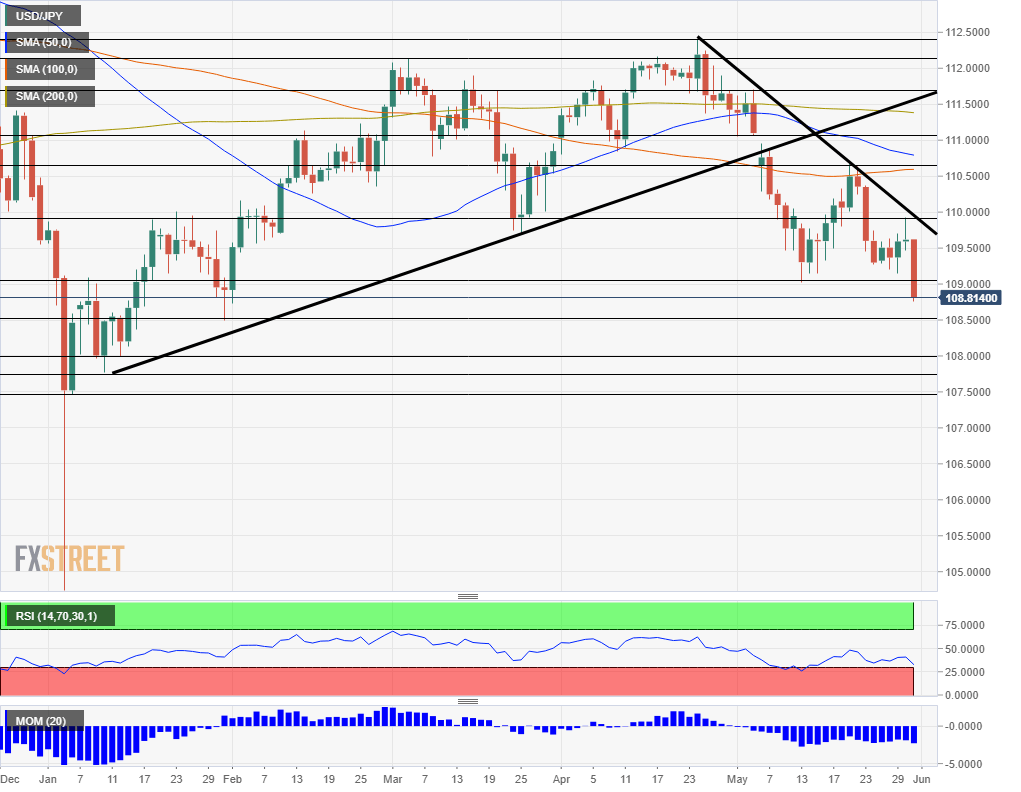 Dollar/yen may have fallen too fast and could correct some of the losses – especially if US data beats expectations. However, if trade tensions do not dissipate, safe-haven flows into the yen may send it lower.

The FXStreet Poll shows a bearish bias in the short term with a target of 108.43. Experts are expecting another week of losses. However, they expect a bounce in the medium and long terms – where targets have not moved. 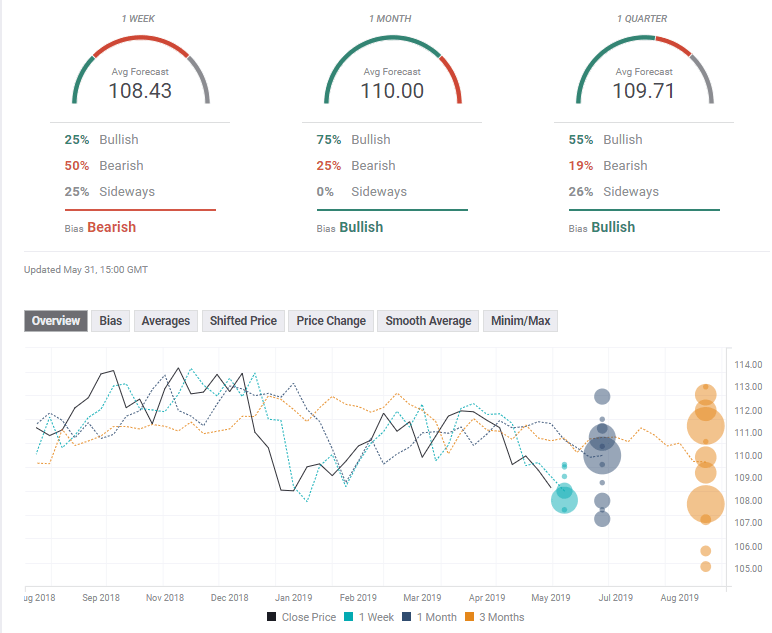 Get the 5 most predictable currency pairs
Previous Article3 reasons why the dollar suddenly dropped and why it will recover
Next Article GBP/USD technical analysis: High volatility sees Cable trading back above 1.2600 figure