Latest
You are at:Home»Opinions»USD/JPY may extend its falls as global worries persist

President Donald Trump’s bashing of China has boosted the safe-haven yen, while the Federal Reserve refrained from rocking the boat. Will USD/JPY extend its falls? The bank’s meeting minutes and ongoing trade talks are set to determine the tone.

“Talks with China are going along very rapidly,” claimed Trump, but he also kept up the heat against the world’s second-largest economy. After denying reports that both countries had agreed on a path to removing tariffs, he reaffirmed his stance that the Asian giant has been abusing the US.

Beijing’s refusal to commit to specific amounts of agrifood purchases have also hindered negotiations. It is essential to remember Trump and his Chinese counterpart Xi Jinping initially aimed to sign the first phase of a deal in a summit this weekend, and this is not happening. The decline of dollar/yen reflects the repricing of an accord – which markets previously saw as imminent.

Trade negotiations have overshadowed the testimony by Jerome Powell, Chairman of the Federal Reserve, that repeated his judgment that the US is a “star economy” and monetary policy is in a “good place.” The bank remains on the sidelines but is ready to cut rates upon a “material reassessment” in the outlook. Powell has rehashed his post-rate-decision messages.

What about raising interest rates? The bank first wants to see the “white in inflation’s eyes” – and for a long time. However, fresh Consumer Price Index data has gone the other way. Core CPI – which carries more weight than headline inflation, has disappointed with a deceleration to 2.3% yearly.

The economy seems to be in a goldilocks spot – low unemployment as reflected in the jobs report but no inflation.

On the other side of the Pacific, Japanese Gross Domestic Product missed forecasts with a quarterly expansion rate of only 0.1%. Without considerable growth, it is hard to see the Bank of Japan alter its ultra-loose monetary policy.

Trade talks are set to continue, and headlines related to the topic will likely have the most significant impact on dollar/yen. Hopes for an accord – especially one that includes rolling back levies – will probably be cheered and send USD/JPY higher.

Further snags, bumps, and hardship may all send the currency pair lower. Tweets by Trump and also by Hu Xijin – the outspoken editor of the Chinese outlet Global Times, may cause jitters.

The economic calendar kicks off with housing figures. Both Building Permits and Housing starts are expected to rise in the report for October. However, the data tend to offset each other, thus not triggering a meaningful reaction.

The main event of the week is Wednesday meeting minutes from the Federal Reserve, which shed more light on the decision to cut interest rates earlier this month and signal a pause. Two members, Eric Rosengren and Esther George, voted against loosening policy – dissenting for the third time in as many meetings. Investors will want to see if opposition to further cuts has risen, or if those calling for more cuts have become more vocal.

While three weeks will have passed between the decision and the publication of the minutes, officials revise the document until the last moment. The Fed is aware of the market reaction.

Existing Home Sales are of interest, and similar to other housing statistics, they are set to show ongoing improvement. Markit’s preliminary Purchasing Managers’ Indexes for November carry expectations for moderate growth. Contrary to ISM’s numbers, they do not expose a divide between sluggish manufacturing and upbeat services.

The Japanese yen clings to its throne as the ultimate safe-haven, attracting flows in times of trouble. Mid-East tensions, North Korea, and US-Sino relations are likely to have more sway than almost any economic figure coming out of Japan.

Nevertheless, trade figures are of interest to see if global commerce – and growth – continue their slowdown. Later in the week, inflation figures on the national level are will almost certainly show sluggish changes in prices. Excluding food and energy, yearly inflation is expected to stand at 0.5% – and other gauges of inflation are at lower levels.

Dollar/yen’s failure to hold above the 200-day Simple Moving Average is compounded by tentative losses of upside momentum and the uptrend support line. All in all, bears are gaining ground. The currency pair is still holding above the 50 and 100 SMAs. 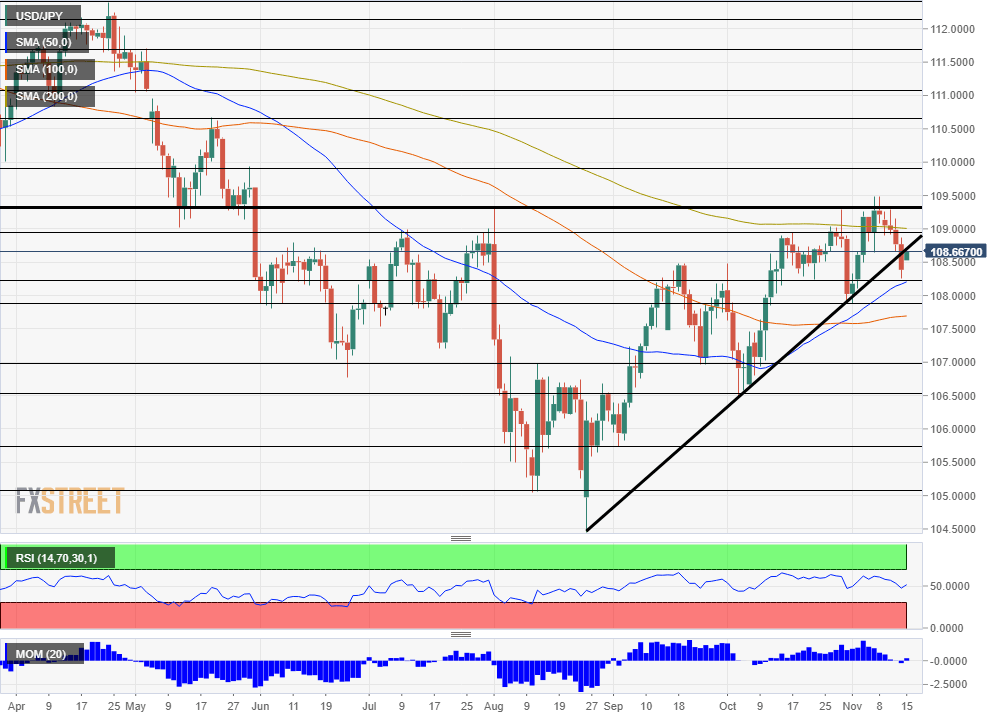 Additional signs of a global slowdown – even if they are not as prominent in the US – may continue dragging USD/JPY lower.

The FX Poll is showing that experts are foreseeing further falls for dollar/yen, perhaps not in the short-term, but afterward. Targets for all timeframes have been moderately downgraded. 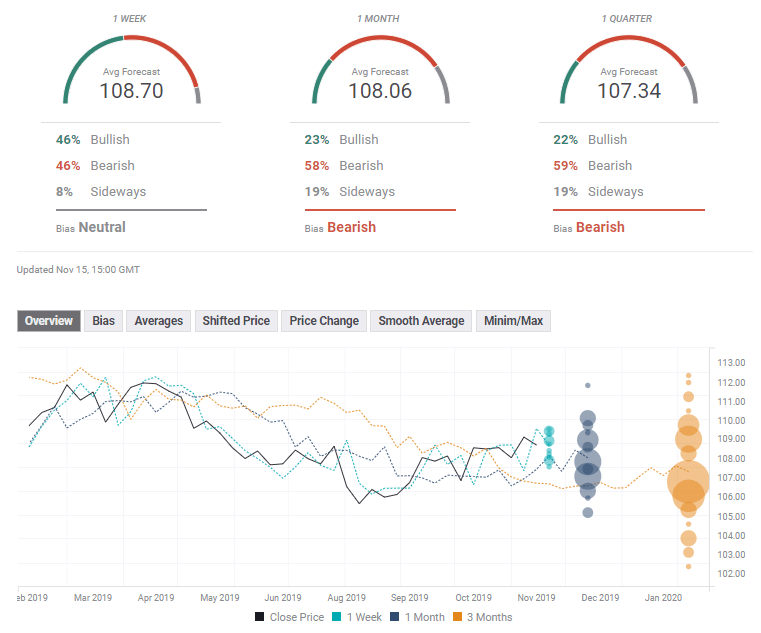 Get the 5 most predictable currency pairs
Previous ArticleECB’s Visco: European single currency needs to interact with a single fiscal policy
Next Article EUR/JPY ends five-day negative streak and rises back above 120.00