Latest
You are at:Home»FXStreet News»USD/JPY Price Analysis: Keeps the red below 110.00 mark, focus remains on FOMC

The USD/JPY pair extended its steady intraday retracement slide from one-and-half-week tops and continued losing ground through the early North American session. The pair refreshed daily lows in the last hour and was last seen hovering around the 109.85-80 region, down 0.20% for the day.

Investors turned nervous ahead of the highly-anticipated FOMC policy decision. This was evident from a generally softer tone surrounding the equity markets, which, in turn, benefitted the safe-haven Japanese yen. Bearish traders further took cues from a modest downtick in the US Treasury bond yields and a subdued US dollar demand.

From a technical perspective, the recent bounce from the 109.20-15 confluence support stalled near a descending trend-line extending from YTD tops touched in March. This, along with another ascending trend-line, constitutes the formation of a symmetrical triangle and points to indecision over the USD/JPY pair’s next leg of a directional move.

Meanwhile, technical indicators on the daily chart are holding comfortably in the positive territory and support prospects for an eventual breakout to the upside. That said, it will still be prudent to wait for a convincing break through the triangle hurdle, around the 110.15-20 region before positioning for any further appreciating move.

The USD/JPY pair might then surpass the monthly swing highs, around the 110.30-35 region and accelerate the momentum back towards the 111.00 neighbourhood.

On the flip side, immediate support is pegged near the 109.65 region, below which bears are likely to challenge the 109.20 support area. The mentioned region marks the lower boundary of the symmetrical triangle and is closely followed by the 50-day SMA around the 109.00 mark. A convincing break below will negate any near-term positive move.

The next relevant support is pegged near the 108.70 horizontal level, below which bearish traders could push the USD/JPY pair further towards sub-108.00 levels in the near term. 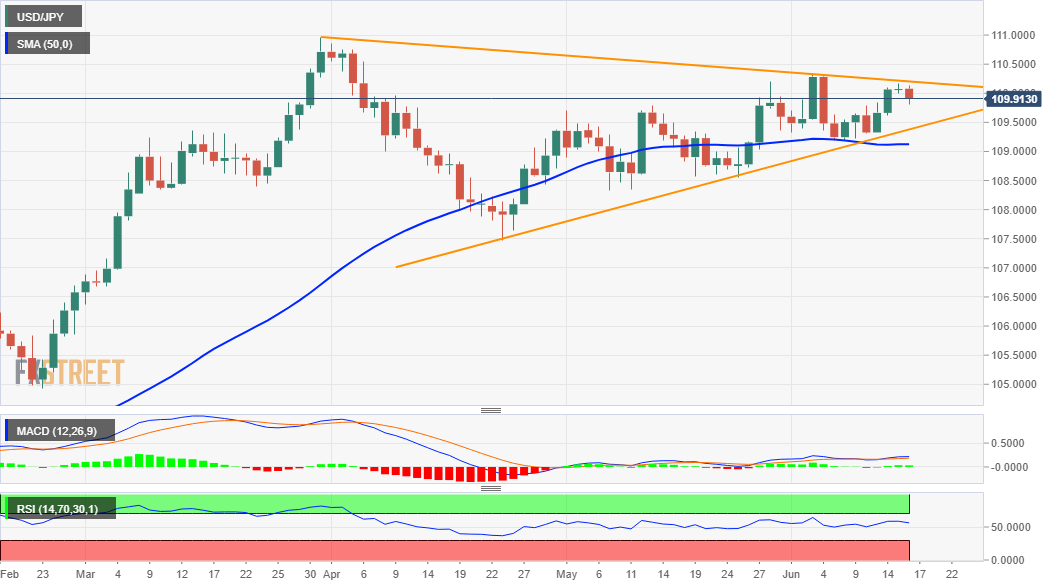