Latest
You are at:Home»Opinions»USD/JPY rally may have ended and more falls could come

This was the week: Talks continue, US retail sales plunge

Chinese government involvement in the economy and intellectual property remain thorny issues. Reports that the US may push back the deadline to end talks from March to May helped improve the atmosphere. However, later in the week, it became apparent that both sides remain far apart.

The world’s largest economies may sign a document laying out the framework for the next round of talks, a limited accord that will not help calm markets’ nerves.

Government shutdown: Democrats and Republicans struck a deal to provide some border funding and keep the government open. Trump is reportedly supporting it reluctantly.

US inflation beat expectations with Core CPI coming out at 2.2% YoY. The Fed has reasons to remain upbeat and not too dovish.

More importantly, retail sales plunged by 1.2% and the control group, the core of the core, plummeted by 1.7%, the worst in over a decade. Many are skeptical about this data for December. It may have been impacted by the shutdown, early Black Friday sales in November, and perhaps inaccuracies. Nevertheless, GDP forecasts were slashed, and the pair fell on a risk-off atmosphere.

Japanese GDP missed expectations with an increase of only 0.3% and contributed to the pressure on the yen.

US events: FOMC Minutes stand out

Unless new delayed US data is scheduled, the week is relatively light ahead of a very busy one afterward. The FOMC Meeting Minutes stand out.

These are the minutes from the Federal Reserve’s dovish twist decision in late January. Fed Chair Jerome Powell and his colleagues called for patience on raising rates and also opened the door to modifying their balance sheet reduction program.

The document may shed some light on the concerns, external and domestic, that led the world’s central bank to make its decision. They will also help understand the differences between the members, and see if any are considering a rate cut.

A busy calendar awaits traders on Thursday with durable goods orders standing out. This is a delayed report for December that feeds into the GDP. Headline orders rose by 0.7%, but both core measures fell: excluding defense, orders slipped by 0.1% and excluding transportation by 0.4%. Markets will want to see increases in the core data.

Existing home sales are also of interest as the housing sector is showing signs of a slowdown.

Trade talks and politics will remain in the limelight. The March 1st deadline to conclude negotiations is nearing, and markets want to hear optimism not only from Trump but also from hawks like Lighthizer. The Mueller investigation continues in the background and traders should always be alert for developments. 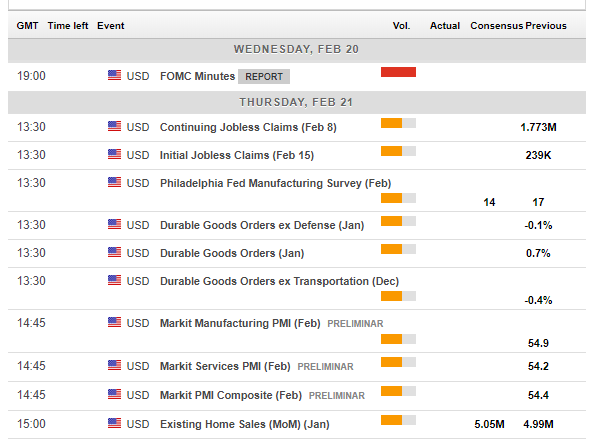 Japan: Some inflation data and geopolitics as usual

In the upcoming week, Japan releases figures almost every day. Trade data on late on Tuesday and national inflation numbers for January, due on Thursday stand out. It is important to remember that the Tokyo region has already released CPI figures for January, so the impact will likely be minimal.

The safe-haven Japanese yen is more likely to move alongside stock markets and the general market sentiment. A significant deterioration in trade talks could boost demand for the safe-haven yen, while preparations for a Trump-Xi Summit can weigh on the currency.

Stocks, also a result of sentiment, will likely remain highly correlated with the pair’s performance. 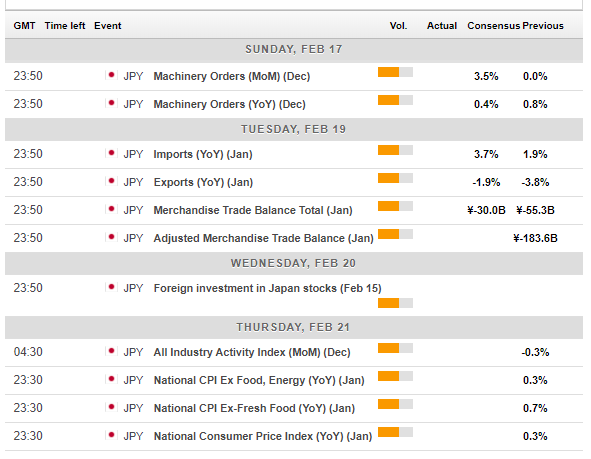 Dollar/yen is currently trading between the 200-day Simple Moving Average and the 50-day one. It fell short of the 200 SMA on its way up.

Momentum remains positive but is weakening while the Relative Strength Index is balanced. All in all, the trend is marginally bullish.

Support awaits at 110.15 that held the pair down earlier in February and separated ranges. 109.50 is the next cushion after supporting USD/JPY in early February. 109.10 was a support line in January, and 108.50 is a critical support line after halting the downfall in late January. 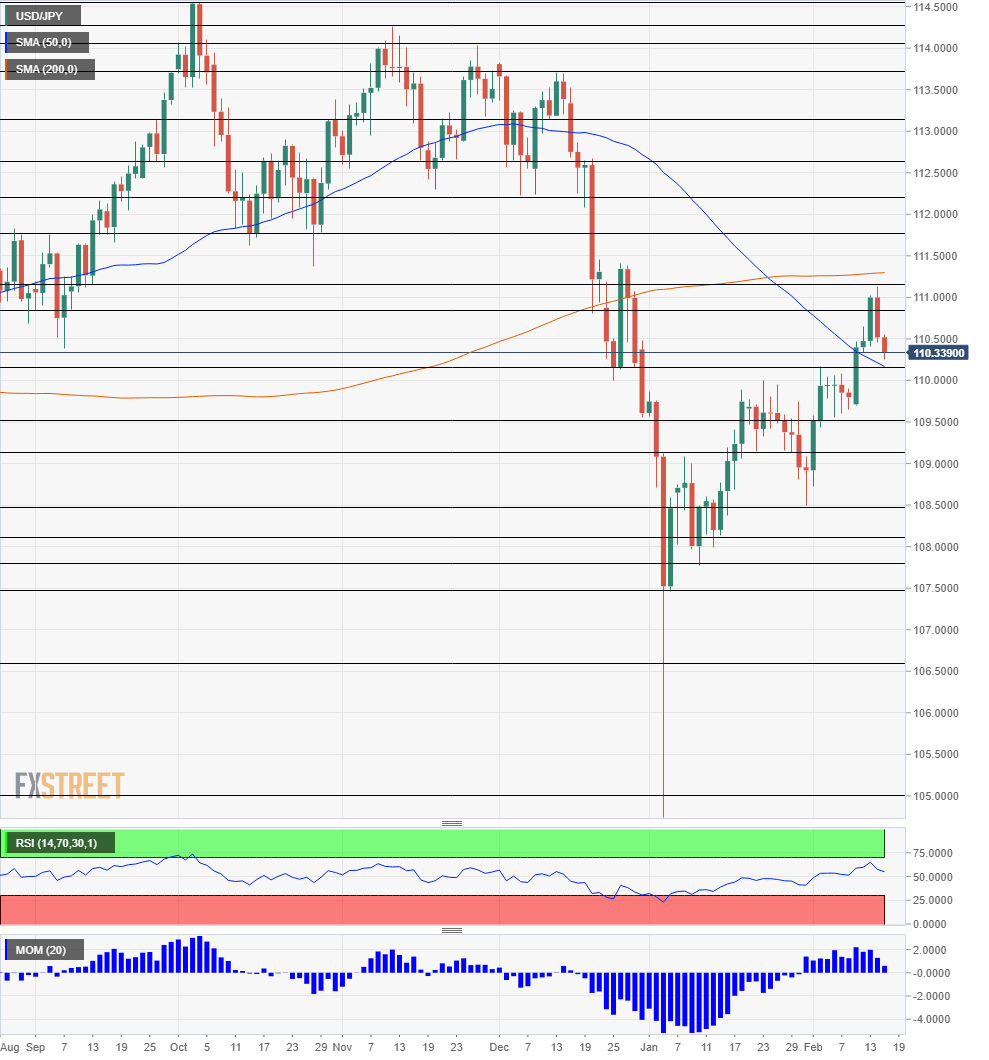 Fresh concerns about the global economy could boost the yen. The downfall began from high levels and may continue even lower.

Get the 5 most predictable currency pairs
Previous ArticleGBP/JPY bounces off lows on upbeat UK retail sales, but lacks follow-through
Next Article GBP/USD turns positive above 1.2800 on upbeat Retail Sales