Home » USD/JPY ready to fall with the global economy

USD/JPY ready to fall with the global economy

Democrats have taken the first step to impeach President Donald Trump. The move followed revelations that President Donald Trump urged his Ukranian counterpart Volodymir Zelensky to investigate potential wrongdoing by Joe Biden and his son Hunter. Biden may face Trump in the 2020 presidential elections. Asking a foreign leader to intervene in domestic politics – and potentially withholding military aid to achieve this objective – have pushed House Speaker Nancy Pelosi to kick off the process.

While the chances of ousting Trump are meager – as Republicans control the Senate – the news sent jitters in markets and weighed on USD/JPY.

China has begun purchasing agrifoods from the US – a sign of progress in talks that Trump praised. However, the US sanctioned Chinese companies that traded with Iran. Both sides have remained optimistic, and high-level talks plans remain intact.

Saudi Arabia has reported that it restored oil output after its oil installations were attacked on September 14. The rapid recovery not only pushed oil prices lower but also put pressure on the safe-haven yen.

Most US economic indicators have come out above expectations. New Home Sales leaped to 713K annualized in August – significantly above expectations. Gross Domestic Product (GDP) growth was confirmed at 2% in the second quarter, with mixed underlying components. The contraction in investment was more severe than earlier thought, but growth came on top of higher inflation – encouraging for the central bank.

On the other hand, the Conference Board’s Consumer Confidence measure disappointed with a drop – albeit from high levels.

Robert Kaplan, President of the Dallas branch of the Federal Reserve, has surprised by saying that further rate cuts have a diminishing effect. Kaplan was one of the proponents of looser monetary policy – a dove – and his shift suggests the Fed will stay put in October. Other officials such as James Bullard and John Williams repeated their known stances.

On the other side of the Pacific, Haruhiko Kuroda, Governor of the Bank of Japan, has left the door open to more easing in his speech. The BOJ may cut interest rates in one of its upcoming meetings, but there seems to be no rush to do so.

US events: Full buildup to the NFP

The trade front is set to be muted in the upcoming week as China celebrates 70 years to  the Chinese revolution. However, comments from Trump and other US officials may still move markets on that front.

On the political front, Democrats are set to keep up the pressure against the president, but without a fall in his approval ratings, markets are likely to shrug off any developments. They have yet to unveil a “smoking gun” that would turn supporters of the president against him.

Even without trade and politics set to stay out of investors’ eyes, they brace for top-tier economic figures.

Tuesday: ISM’s forward-looking Purchasing Managers’ Index for the manufacturing sector provides the first hint toward Friday’s Non-Farm Payrolls – and a snapshot of US industry. Back in August, the figure dropped 50 – reflecting a contraction in the sector. An increase back above 50 is on the cards now.

Wednesday: ADP’s Non-Farm Payrolls report for the private sector is not always well-correlated with the official figure, but tends to move markets. America’s largest provider of payroll software reported an increase of 195,000 jobs in August and a more moderate increase is forecast for September.

Thursday: The last hint toward the labor market report is the ISM Non-Manufacturing PMI. Contrary to the manufacturing sector, the services one is growing at a rapid clip – a score of 56.4 points in August. Also here, a moderation is projected. Factory orders are also noteworthy as they feed into GDP calculations.

The US Non-Farm Payrolls fell short of expectations in the past two months with an increase of only 130K. Some see subdued employment expansion as a sign that the world’s largest economy has achieved full employment – a theory that goes hand in hand with the acceleration in wage growth 3.2% yearly and 0.4% monthly in August.

However, the recent rise in the participation rate – to 63.2% from 63% –    has shown that there is still slack in the labor market. A faster increase in positions and a slowdown in earnings are projected now. The data feed into the next Fed decision, due out at the end of October.

Here are the top US events as they appear on the  forex calendar: 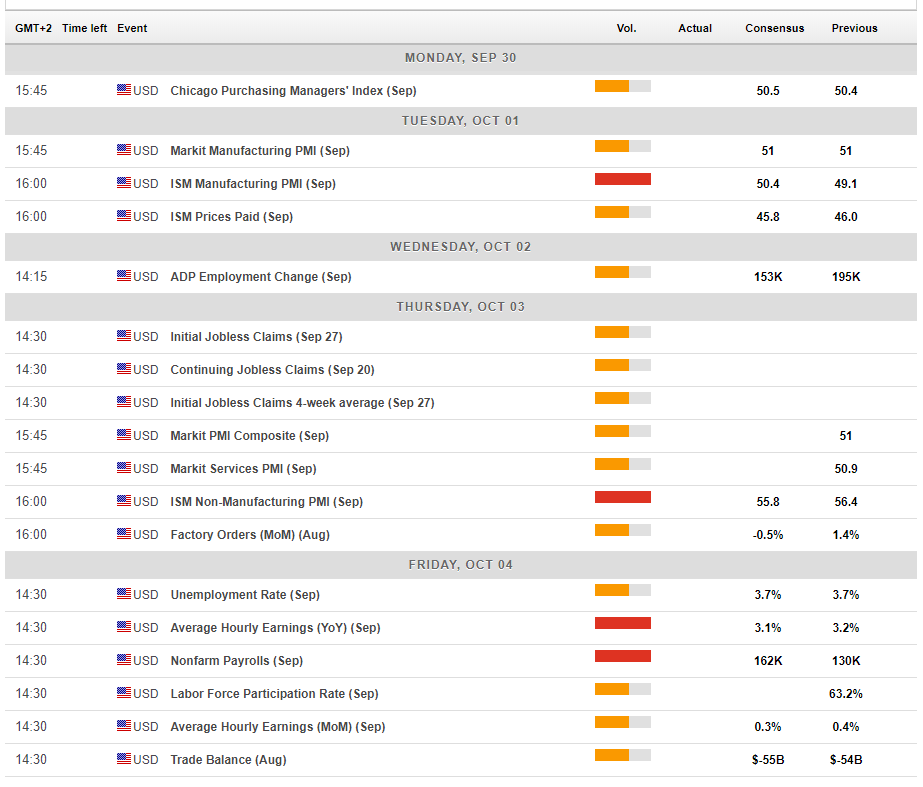 The Japanese yen remains the safest of safe-haven assets – bought in times of trouble. Another flare-up in the Middle East could trigger flows into the currency. North Korea – which has been out of the news in recent weeks – may also return to the spotlight.

The Japanese calendar features several noteworthy economic indicators. Industrial output has likely dropped in August after rising beforehand. Japan will have joined the global trend of contraction in the manufacturing sector.

Later on, the quarterly Tankan surveys are set to drop. The BOJ closely watches these figures. Japan’s Unemployment Rate is set to rise – yet to an enviable 2.4%. 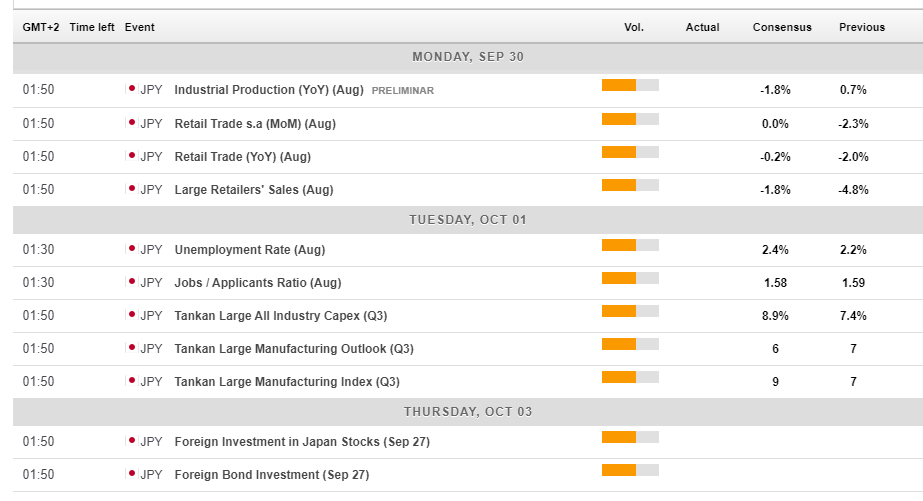 The dollar/yen daily chart features several noteworthy trendlines. The currency pair broke below the steep uptrend support line – which was hard to maintain. More importantly, it trades below the upper downtrend resistance line that dates back to May. USD/JPY has support at the lower downtrend support line which it conquered in late August and now markets the bottom of the range.

Momentum remains to the upside but USD/JPY was unable to make a convincing break above the 100-day Simple Moving Average. It trades above the 50-day SMA but below the 200-day one.

All in all, the picture is marginally bearish. 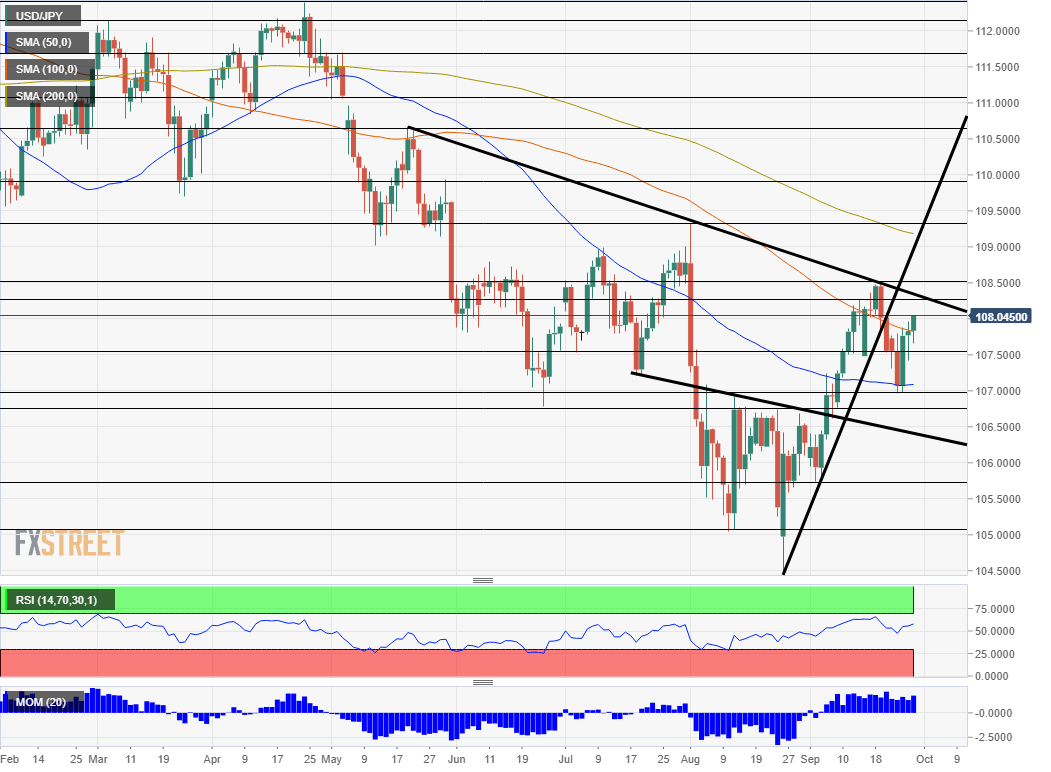 Signs of a global economic slowdown are intensifying – and will likely continue – keeping the safe-haven yen bid. Uncertainty around trade and geopolitics is unhelpful either.

The  FXStreet Poll  is showing a bullish bias in the short run and a bearish one afterward  –and with falling targets. The average targets have been bumped up in the past week, albeit modestly. 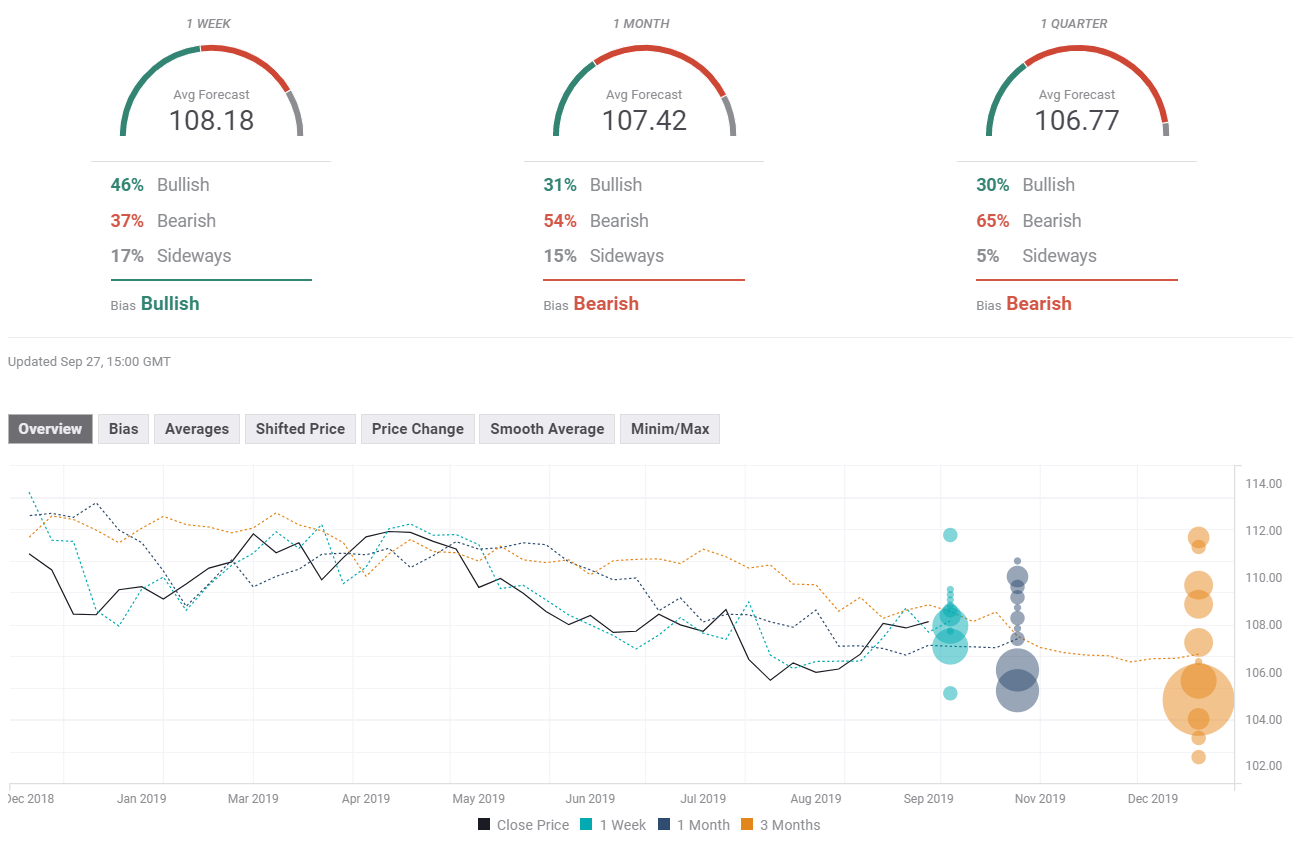 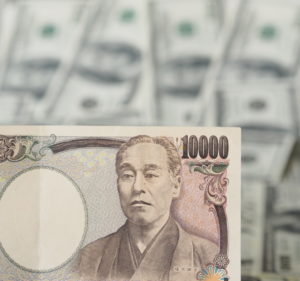 Sterling may surge if Boris Johnson loses his job

USD/JPY has been looking for a new direction amid trade tensions and political uncertainty.   A full buildup to the critical Non-Farm Payrolls promises an exciting start to the fourth quarter. Late September's daily chart remains bullish for USD/JPY. The FX Poll is pointing to a short-term gain followed by significant falls afterward. This week in USD/JPY: Political turmoil, mixed data Democrats have taken the first step to impeach President Donald Trump. The move followed revelations that President Donald Trump urged his Ukranian counterpart Volodymir Zelensky to investigate potential wrongdoing by Joe Biden and his son Hunter. Biden may face…