Latest
You are at:Home»Opinions»USD/JPY recovery capped as trade wars escalate

Another week, another escalation in the US-Sino trade war. China announced it would raise tariffs on imported US goods and may also reduce buying of US agricultural and energy products. Speculation that China would dump US treasuries also sent shivers through investors’ spines and the following report about a reduction in Chinese holdings of American bonds was also concerning.

Relations further deteriorated as US President Donald Trump declared a national emergency related to the use of technology from adverse nations, a move pointed to Huawei and also ZTE, two Chinese telecommunications giants.

The safe-haven yen gained ground on the news but dropped as US Treasury Secretary Steven Mnuchin said he would fly to Beijing for more talks. The rebound in stocks also helped.

However, China may not want Mnuchin to come over. According to state media, the country is not interested in further talks. The blacklisting of Huawei weighed heavily on sentiment. For USD/JPY, it meant an inability to capture 110.00.

US data was mixed and played second-fiddle to the worries around trade. Retail sales disappointed with a drop of 0.2% on the headline and no change in the all-important control group, the core of the core. However, housing starts, building permits, jobless claims, and the Philly Fed manufacturing index all beat expectations.

Tensions in the Persian Gulf mounted as Saudi ships were sabotaged, perhaps by Iranian-backed Yemeni Houthi rebels. So far, the flow of oil continues without disruption, but a flare-up in the Middle East may trigger flows in Japan’s currency.

The fate of global trade remains left, right, and center. As time passes by, ships that left China on May 10th or later will arrive at the US and face higher tariffs. Moreover, the administration may move forward with slapping duties on new goods, and China could also announce more measures.

Hopeful tweets from Trump and a trip by his treasury secretary Mnuchin to China has the potential to improve the mood. Huawei, mentioned earlier, is also in the mix. The global sentiment and dollar/yen are very sensitive to any development in trade.

The US calendar kicks off in earnest with existing home sales for April, due on Tuesday. The housing sector has been recovering lately, and another increase is on the cards.

Fed members are scheduled to speak throughout the week. Powell will talk about financial risks in Florida and may decide not to talk about monetary policy. Vice Chair Richard Clarida and others will talk as well, but the most significant release from the Fed is not in the form of a speech.

The FOMC meeting minutes from the meeting early in the month. The Federal Reserve left its interest rates unchanged and stuck to its patient stance on interest rates. Chair Jerome Powell stated that weak inflation in the first quarter is due to transitory factors and that he does not see any need to cut interest rates.

The minutes will shed some light on how broadly his view is shared. Apart from opinions on rates and inflation, the document may also provide insights on the Fed’s views on trade, on the labor market situation, and growth.

The housing sector returns on Thursday with new home sales, which are forecast to suffer a small setback after leaping beforehand.

The week ends with the durable goods orders release for April. After massive gains in March, the publication will provide information on investment at the wake of the second quarter, shaping expectations for overall growth. The Fed closely watches the release. 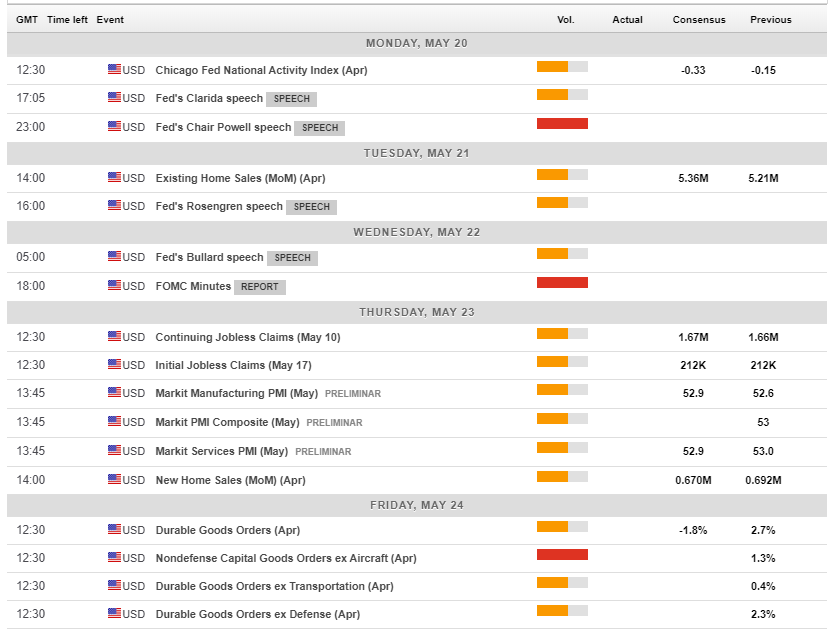 The Japanese yen is first and foremost the ultimate safe-haven currency, rising when global fears rise and falling when they recede.

In the upcoming week, data will have its say. The economy has probably stalled in the first quarter of the year after growing by an impressive 0.5% in the last quarter of 2018. The preliminary release tends to have an impact and draw a response from the Bank of Japan.

Later on, industrial output, machinery orders, and the belated national inflation figures for April will also be of interest. The latter are set to confirm what the Tokyo numbers have already shown: consumer prices are far from the BOJ’s 2% target. So, monetary stimulus is expected to continue, serving as a depressing factor for the yen. 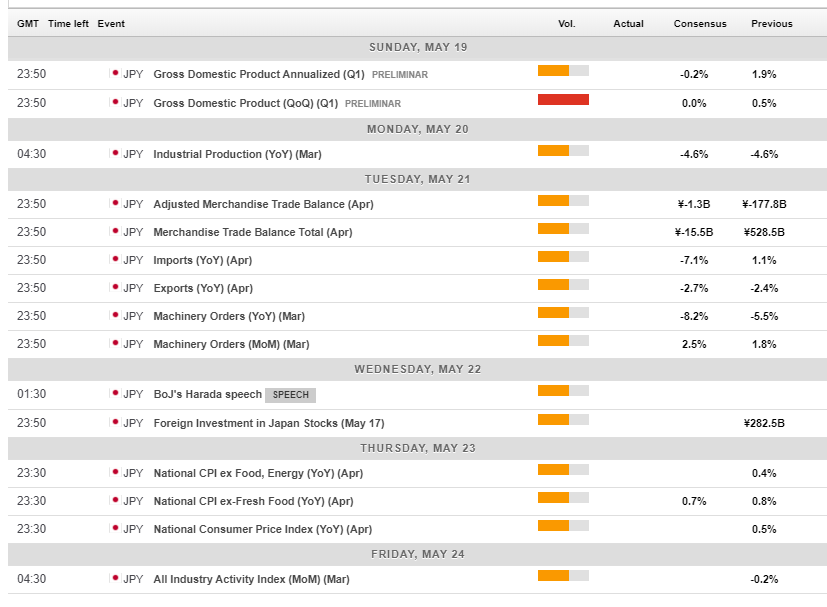 USD/JPY is not oversold anymore according to the Relative Strength Index on the daily chart. The RSI is back above 30. Momentum remains to the downside and the currency pair trades below the 50, 100, and 200 Simple Moving Averages. USD/JPY is still reeling from the loss of the uptrend support, the thick black line on the chart.

Initial support awaits at 109.00 which was a low point in mid-May. The next level to watch is 108.50, a swing low in late January. The currency pair hit 107.75 earlier that month, and this line is another support level, followed closely by 107.50. 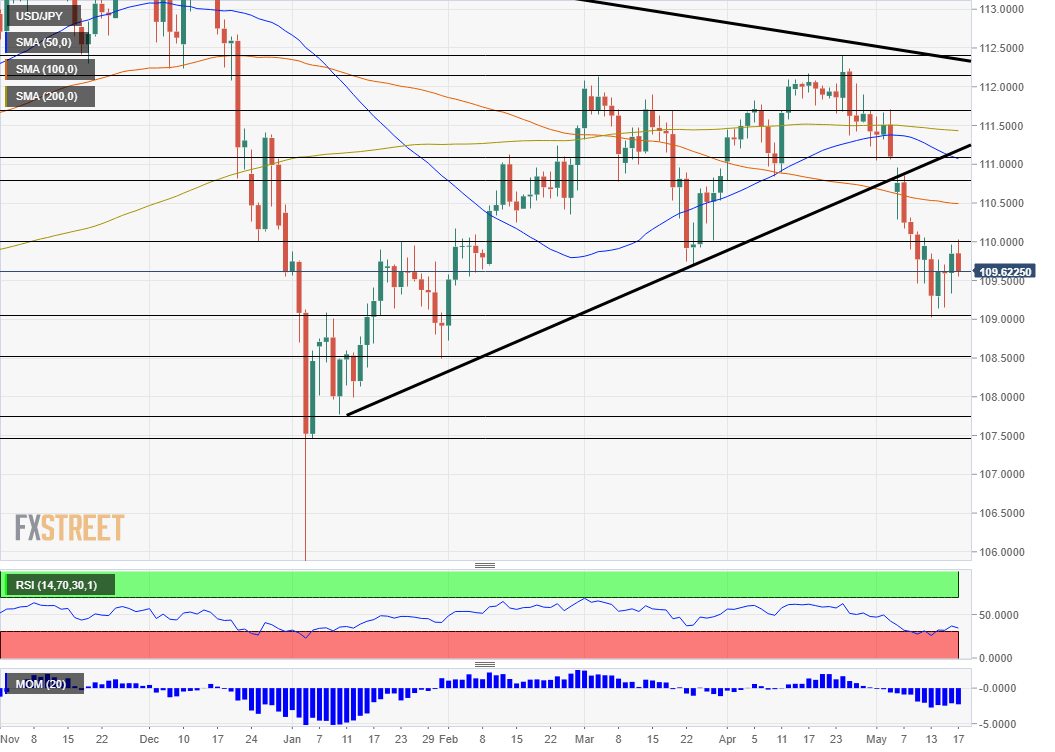 Unless there is a substantial breakthrough in trade talks, something that seems highly unlikely, the currency pair has room to fall alongside stock markets. And while some US figures may be OK, second-quarter data shows a significant slowdown so far. Further disappointment may also weigh.

The FXStreet Poll shows a bearish bias in the short term but it turns bullish in the medium and long terms, with growing conviction in the latter. Changes in the average targets have been limited in the past week after significant downgrades beforehand. 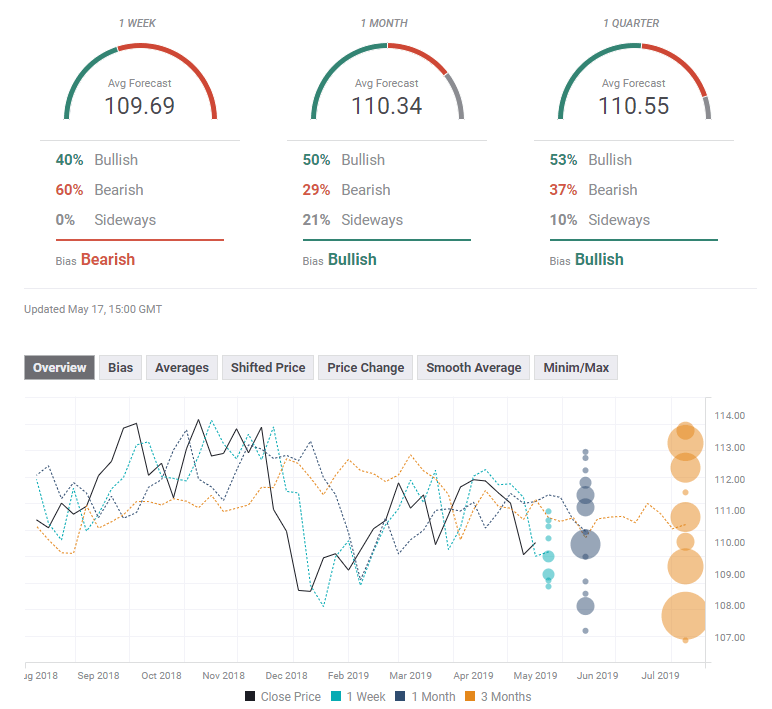