Latest
You are at:Home»Forex News»USD/CAD parity challenged on a softer rate statement

The Bank of Canada did it again: the fresh rate decision contained a rather dovish rate statement, pushing back a potential rate hike farther into the future. USD/CAD made a leap to parity, but this line wasn’t conquered yet. Does the pair have enough momentum to make the break? 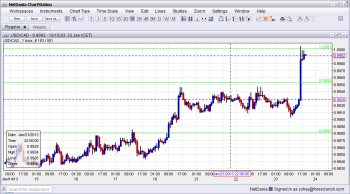 As expected, the BOC left the rate unchanged at 1%. When will the rate move higher? Not so soon. According to the statement, “Higher rates are ‘less imminent than previously anticipated”.

Before Mark Carney leaves his post as governor of the BOC and crosses the Atlantic to the UK, he makes moves that are less hawkish than his image so far.

One of the growing concerns in Canada is housing: prices of homes are dropping, in what some see as the “burst of a bubble”. In such an environment, rate hikes are certainly less than imminent.

USD/CAD was capped under the 0.9950 line towards the publication, and made a break higher. It peaked at 1.0004 before retreating under the parity line. 0.9950 now works as support, and 1.0066 is the next level if the break is eventually confirmed.

For more, see the Dollar/CAD forecast.