Latest
You are at:Home»Forex News»USD/JPY Maintains Gap On Potential Nomination of Kuroda as

The Japanese press has been busy over the weekend with speculation that Haruhiko Kuroda is PM Abe’s choice for the governor of the Bank of Japan. Kuroda is considered a monetary dove, and his policies, if approved, are expected to be very loose, pushing the yen lower. 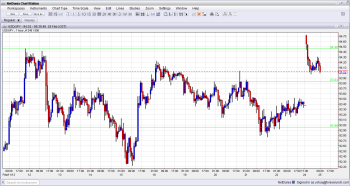 USD/JPY jumped towards the magical 95 line, and slid lower as more liquidity entered the markets. However, the gap remains open for quite a few hours, and this is usually a bullish sign.

Haruhiko Kuroda is the head of the Asian Development Bank (ADB) since 2005. He formerly worked in Japan’s finance ministry. His candidacy was in doubt as vacating the top position in the ADB could lead to appointing a non-Japanese to the role.

If Prime Minister Shinzo Abe did indeed select Kuroda, he will likely be approved. The appointment must be approved by both houses of parliament. Abe’s LDP controls the lower house but the main opposition party, DPJ, controls the upper house. The DPJ opened the door to the nomination by stating that it would be “hard to oppose the nomination of Kuroda”.

An official announcement could come in the next few days. Abe also needs to nominate two other BOJ members in addition to the governor.

USD/JPY dose not close the gap

Dollar/yen kicked off the week by trading above 94.70, but this is mostly due to low liquidity in the early hours of Monday in New Zealand. When more volume kicked in, the pair fell below the peak of 94.46 and stabilized above 94. This is still a significant gap above the close at around 93.40 on Friday.

Usually, when a gap doesn’t close in the first 3-4 hours, this is a sign that the trading range has indeed shifted away.