Spain is currently the epicenter of the debt crisis. The euro-zone’s fourth largest economy suffers from a wide range of problems, with the unemployment rate of 24.4% being the worst.

High debt, like in Spain or Greece, isn’t Spain’s problem. So far. The bigger financial issue lies is with the financial sector. With banks losing access to market funding, the country now faces a crucial decision about handling the banks. The path it takes is highly important for the country and the euro.

The current government is trying to fix the two-tier labor market, but it doesn’t have too much success. In the short term, the reform encourages firing, and in the long term, there is doubt that the change was really that big – perhaps Rajoy didn’t go far enough.

Where the Debt Really is

Cutting the debt involved an austerity program, which is hard to implement as regional tensions mount, especially with Catalonia and Andalusia.

So why does Spain pay a risk premium of over 4% over Germany? Apart from the unemployment rate, the real problem lies within the financial sector.

Spain’s real estate boom and bust left many banks in a perilous situation, some of it unaccounted for. Banks aren’t keen to lend as they are still carrying the burden of the bust. The current administration is trying to clean up the banking sector, but doing it too fast might be dangerous as well.

Up to now, both the current and previous governments worked to consolidate the banking sector and to minimize the risk (even if this can create a “too big to fail” bank). It has avoided taking over banks.

Ireland had a similar case of a real estate bubble. It took over the banks’ debts and found itself with a bottomless pit. Irish citizens and European bailout money is now flowing through the government to the Irish banks and to their creditors in Britain, Germany and France (among others).

Spain lent 316.3 billion euros from the ECB in March, nearly double the amount in February. The intensive lending comes despite the ECB’s â‚¬1 trillion LTRO. Spain did manage to use the LTRO to raise a lot of money during that period, and the current funding already amounts to around 50% of the year’s needs.

It’s hard to compare the small northern island to Spain, especially as Spain is in the euro-zone. Nevertheless, Iceland took over its banks, but didn’t repay their immense debt to international creditors. It let the banks fall and also persecuted those responsible for the crisis.

The government initially wanted to follow demands from the UK and the Netherlands, but public pressure changed the course. Today, the country is growing again, and unemployment is falling.

Public pressure is growing in Spain, with the Twittersphere rocking with hastags such as #hagamoscomoislandia – “Do as Iceland did”. It’s hard to believe that the current conservative government will follow this path, but with winds of defiance from Greece and the change in France, following the Irish model will be hard to follow as well.

LTRO – The Dark Side

The LTRO provided only a temporary relief, as seen by the rising yields. Local banks used the LTRO money to buy Spanish bonds. Now they are in loss on these bonds. This adds to the strain.

Its banks might need around 88 billion euros of injected funds. If this money comes from the government, the debt-to-GDP ratio could easily cross the 100% line and get closer to Italy’s ~120%.

The fear that the Spanish sovereign will need to cover for the banking sector is one of the drivers of the higher yields and will probably rise to a higher spot on the agenda.

Foreign investors already reduced their exposure to Spanish debt. They hold only 33% of debt, lower than 44% in 2010.

What will the EU do with Spain

Spain was already labeled “too big to bail“ and might escape an official bailout. With some reform and with a “growth compact”, perhaps led by France’s Hollande, it could continue floating and even returning to growth without aid.

As aforementioned, the bigger elephant in the room is the banking sector. Here, an agreement between the ECB and the government could bypass a formal bailout. The ECB already knows how to make specific demands from governments in return for aid.

If the government agrees to a significant reform that will clear the fog over the banking sector, the ECB might be able to help in extensive loans to help the banks pass the difficult times. Such a program could provide an assurance that the sovereign will avoid taking over the banks, and yields will fall to normal levels even without direct intervention.

The ECB could also buy more Spanish yields and finally act as a lender of last resort, something that currently doesn’t exist in its mandate.

Lower yields mean cheaper lending and more room for stimulus, or at least less austerity. This may sound too optimistic, and it will not happen in May. Nevertheless, some thinking in that direction of tackling the banking sector, could certainly help Spain climb from the abyss. With 24.4% unemployment, how low can you go from here?

Losing Spain could prove a fatal blow for the euro-zone. Its economy is indeed too big. As aforementioned, German banks are heavily exposed to Spain. Seeing their loans denominated in pesetas will not be a pretty sight.

This article is part of the Forex Monthly Outlook for May. You can download it by joining the newsletter in the form below, which appears on any article on  Forex Crunch. 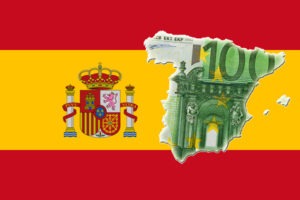 Spain is currently the epicenter of the debt crisis. The euro-zone's fourth largest economy suffers from a wide range of problems, with the unemployment rate of 24.4% being the worst. High debt, like in Spain or Greece, isn't Spain's problem. So far. The bigger financial issue lies is with the financial sector. With banks losing access to market funding, the country now faces a crucial decision about handling the banks. The path it takes is highly important for the country and the euro. The current government is trying to fix the two-tier labor market, but it doesn't have too much…