The price of the WTI is prolonging the weekly upside and is now approaching the $63.00 mark per barrel, coincident with the 21-day SMA.

Crude oil prices have been edging higher since Tuesday’s test of the 200-day SMA just above the psychological $60.00 mark, always with the US-Iran effervescence and its impact on oil supply sustaining the recovery.

Adding to the up move in prices, geopolitical tensions in the Persian Gulf remain on the raise, particularly in response to the recent attacks to Saudi oil facilities and tankers.

Later in the week, traders will closely follow the OPEC+ meeting Jeddah with Iran, the ongoing US sanctions and the potential action from Russia and Saudi Arabia to pump extra oil in order to fill the supply gap expected to be on top of the agenda, ahead of the cartel’s key meeting in June.

Further out, crude oil has so far managed to leave behind yesterday unexpected build in US crude oil supplies after the EIA reported inventories went up by around 5.5M barrels.

Prices of the WTI continue to rebound from recent lows in the $60.00 mark, already advancing nearly 4% since Monday’s lows. However, the resurgence of US-China trade concerns and rising geopolitical tensions in the Persian Gulf have been sustaining the moderate rebound in prices. Furthermore, speculative positioning, the so-called ‘Saudi put’, the ongoing OPEC+ deal to curb oil output and US sanctions also underpin the constructive outlook around crude oil. 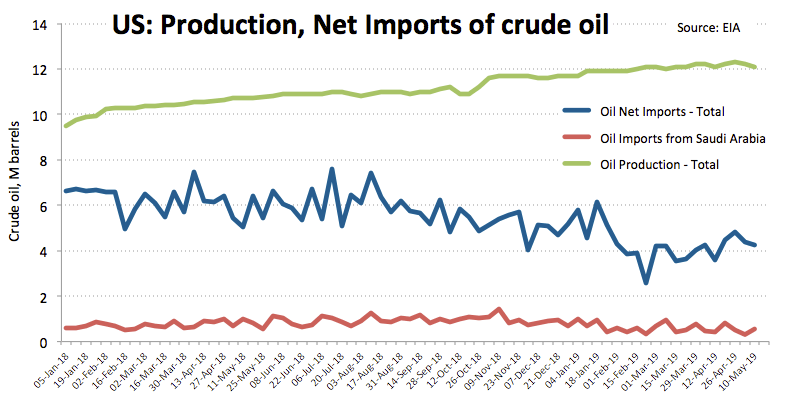