AUD/USD Forecast May 6-10 – Will RBA finally press the rate trigger?

China remains gripped in a slowdown, which is bad news for Australia, as the Asian giant is China’s largest trading partner. Chinese manufacturing PMI dropped to 50.1 in April, pointing to stagnation. Building approvals swung wildly, falling 15.5% in March, after a gain of 19.1% a month earlier.

In the U.S, the Federal Reserve stayed on the sidelines, maintaining the benchmark rate. The rate statement noted that inflation pressures are muted and that the FOMC would remain patient regarding future rate movements. Fed Chair Jerome Powell reinforced this stance at a follow-up press conference, saying “we don’t see a strong case for moving in either direction”. The Fed is already on record as saying it does not expect to raise rates before 2020, and with inflation levels persistently below the Fed’s target of 2.0%, the Fed can afford to continue its wait-and-see stance.

AUD/USD daily graph with support and resistance lines on it. Click to enlarge:

We start with resistance at 0.7480. This marked the high point of the pair in mid-July and defends the round 0.75 level.

The round number of 0.74 was the high point reached at the wake of December. This is followed by 0.7340, which the pair breached in late November.

0.7315 was a swing high seen in late September. Further down, 0.7240 separated ranges in September and in October.

Close by, 0.7165 (mentioned last week) was a swing low after a recovery in mid-November.

I remain bearish on AUD/USD

The global trade war has taken a toll on the Australian economy, and the markets are betting that the RBA will respond with a rate cut in order to stimulate the economy. Lower rates will make the Aussie less attractive to investors. As well, a soft retail sales release could weigh on the Aussie. 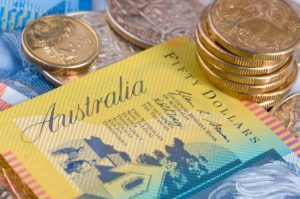 After three straight weeks in the red, AUD/USD was unchanged last week. The upcoming week is busy and investors will be keeping a close look at retail sales and the RBA rate decision. Here is an outlook for the highlights of this week and an updated technical analysis for AUD/USD. China remains gripped in a slowdown, which is bad news for Australia, as the Asian giant is China's largest trading partner. Chinese manufacturing PMI dropped to 50.1 in April, pointing to stagnation. Building approvals swung wildly, falling 15.5% in March, after a gain of 19.1% a month earlier. In the…