Latest
You are at:Home»Minors»Canadian Dollar hoping for oil improvement after the dovish BOC twist

This was the week: Oil and tumultuous trade

The Bank of Canada decided to leave interest rates unchanged as expected but surprised with a dovish shift. While they hope the new trade agreement to continue supporting the economy, they see non-inflationary growth. If there is no risk of higher inflation, there is no rush to raise rates. This shift sent the loonie lower.

Earlier in the week, the C$ jumped on the reports from Buenos Aires about the Trump-Xi Summit. The Presidents of the world’s largest economies agreed on a trade truce. However, there were differences between the statements coming out from both countries. Some respite was seen after China aligned most of its message with that of the US, but the arrest of Meng, Huawei’s founder’s daughter, and CFO at the Chinese firm dampened the atmosphere. CAD, a risk currency, suffered.

Oil remained central to the movements in the loonie. The province of Alberta decided to limit the production of oil as much of it is stuck in pipelines in the US. The abnormal move helped shrink the spread between Canadian crude, the Western Canadian Select (WCS) and America’s West Texas Intermediate. This provides a bit of relief for the loonie.

Oil ministers from OPEC and non-OPEC countries gathered in Viena and tried to strike a deal to curb production and lift prices. Iran, struggling under US sanctions, refused to cut output and was reportedly the stumbling block to cutting a deal. Others blamed Russia. The slide in prices weighed on the C$.

US data was OK.

The price of the black gold remains in the limelight. The loonie will initially react to the fallout from the OPEC meeting and will also await further developments on the production limits in Alberta. The weekly inventories report on Wednesday will likely remain of high importance once again.

The Canadian calendar does not feature any top-tier events in the second week of September but provides some insights into the housing sector. Housing Starts and Building Permits stand out on Monday. The ADP NFP comes out after the official figures but is still of interest.

Another housing report is due on Thursday with an update on prices of new homes, which have been stuck of late.

Global trade remains high on the agenda. Talks between the US and China continue. Any official, non-official statements or tweets by Trump may have a significant impact on markets. The sides have fewer than 90 days to thrash out an agreement.

The US publishes inflation figures for November on Wednesday. The data disappointed in October with Core CPI slowing to 2.1% YoY. Another drop could impact the Fed decision in the following week and also the Fed Chair’s testimony on the same day.

Jerome Powell will release his prepared remarks and then face lawmakers in a testimony postponed due to the funeral of former President George H. W. Bush. Powell will provide a comprehensive update on the economy and may hint about the path of rate hikes moving forward. Markets will scrutinize every word.

Retail sales are due on Friday. The American consumer is critical to the economy. The report for October was quite upbeat. It will be interesting to see if consumption continued growing in November, the month that includes Black Friday. The data also feeds into Q4 GDP. 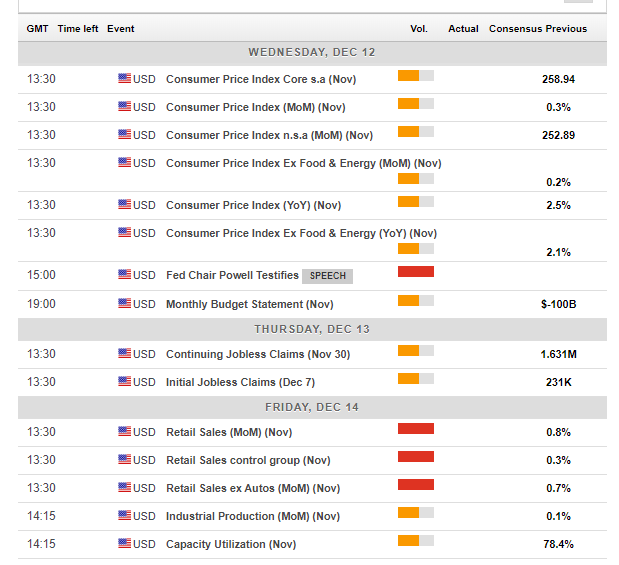 Dollar/CAD suffered a dramatic drop below the uptrend support line that accompanies it since October 1st. However, the pair quickly recaptured the line and then hit the highest levels since 2017.

Momentum remains upbeat, and the Relative Strength Index (RSI) is still below 70, thus not indicating overbought conditions. All in all, the picture remains bullish. 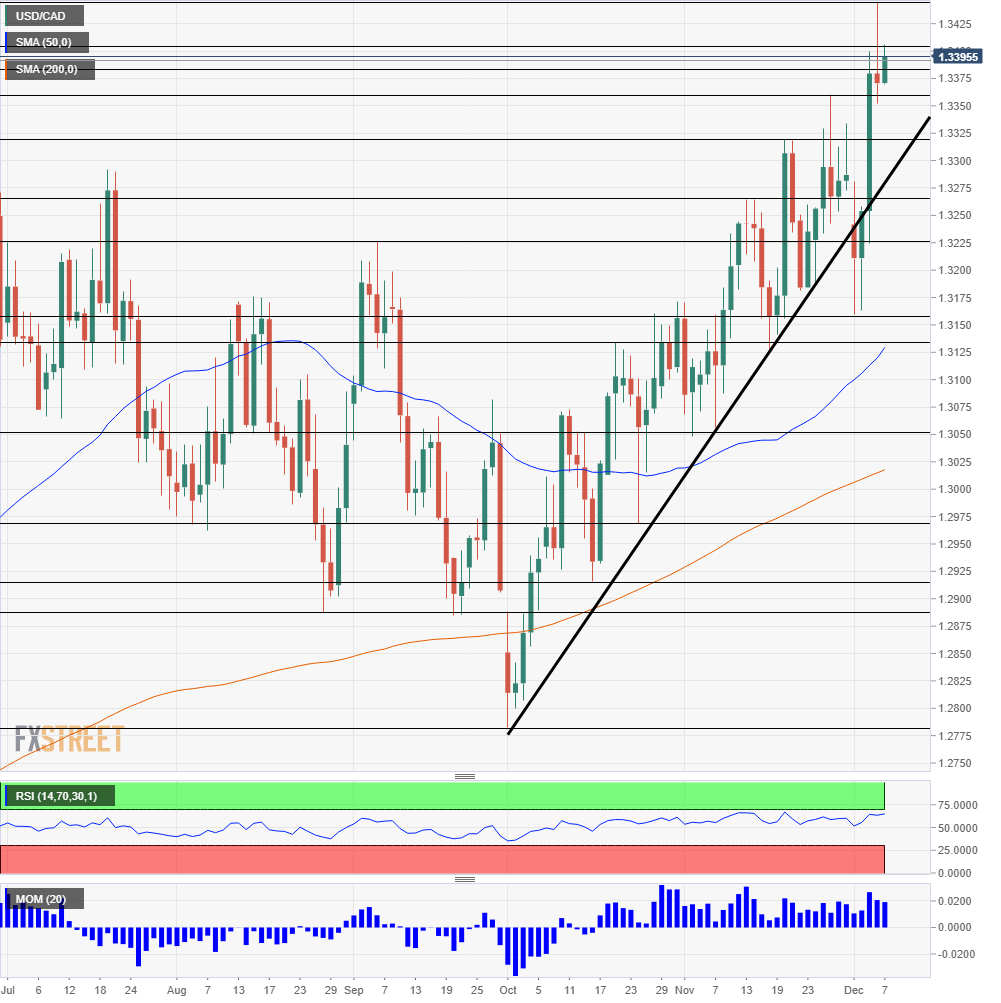 Falling oil prices and concerns about a global slowdown will likely weigh on sentiment in the markets. The Canadian Dollar could come under further pressure, and USD/CAD has room to rise.