The first day of the month has seen the yen and also Swiss franc losing ground during Asia trade, with leveraged funds taking the opportunity to place fresh risk positions. This is the seventh day of USD/JPY gains, currently at 5-wk highs above the 83.50 level.

The overnight release of the all important Tankan survey for Q1 was not a major factor in the yen selling.   In general, the survey showed confidence in the business sector holding up well but, as yet, we don’t know how many of the responses were taken before and after the earthquake.   Meanhwhile, there appears to be no stopping the Aussie dollar, with AUD/JPY rising on a daily basis for over two weeks now.   Investor appetite for the currency and also bonds (see below) remains firm.

Good and bad news in Portugal. Late yesterday, Portugal announced a bond auction for today, citing specific demand for the 1-yr securities (maturing June 2012). This is a fairly unusual step, as issuers are normally far less spontaneous in their issuance strategies.   Clearly, Portugal wants to take the opportunity to show that it can still raise funds in the market.     This is key, not least because the election is to be held on 5th June, crucially 10 days before nearly EUR 5bn of bonds need to be repaid.   Without a government, it’s very unlikely that, constitutionally, Portugal will be able to request a bail-out from the EU before this date. 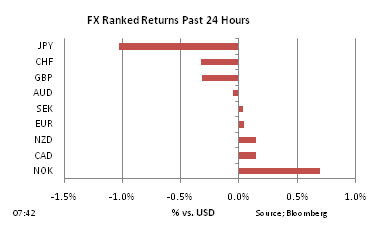 Ireland’s banking crisis from bad to worse. The results of yesterday’s stress tests were not as bad as some had feared, but nevertheless highlighted the perilous state of the Irish banking sector. The four lenders were instructed to raise a further EUR 24bln, with plans laid out for the merger of two of them.   Furthermore, should the economy not perform well, there will likely be further cash injections.   The economy has already shrunk 14% from the peak in output, whilst the banks themselves are being instructed to shrink their balance sheets so they are smaller in relation to the (already shrunken) economy and pose less risk overall.   In sum, this process still has a long way to run and could worsen still if the government’s optimism on export-led growth does not come to fruition.   Meanwhile, the ECB has suspected the minimum credit rating threshold for Irish government and guaranteed debt. This means there is no threat of Ireland failing to gain access to ECB liquidity, but it does mean the ECB is potentially increasing the amount of credit risk on its balance sheet.

Growing optimism towards the US labour market. The weight of evidence emerging in the US continues to favour the interpretation that the labour market is healthier these days, certainly in terms of jobs growth. Ahead of today’s critical non-farm payrolls figures for March, the anecdotals support an outcome of at least 200K, if not more. Wednesday’s ADP Employer Services’ estimate of private payrolls showed a 201K gain in the month, the fourth straight rise of around 200K and, in the five weeks ended March 18th, continuing claims fell by 119K, a sign that fewer people are losing their jobs.

Other surveys provide further encouragement on employment, including the ISM manufacturing survey, the Beige Book, and the Monster Employment Index of online job vacancies. For the Fed, jobs growth has been the missing ingredient. To the extent that respectable jobs growth is recorded on a more consistent basis, its confidence in the self-sustaining nature of the recovery would grow. This in turn would trigger a conversation about the right time to start removing some of that enormous financial punchbowl that the Fed has laid out for the economy. Should we get an upside surprise on payrolls today, then any extension of QE2 looks much less likely, which would benefit the dollar.

Euro feeding on strong data and higher rates. The price action on the euro yesterday reflected the degree to which it is trading primarily on interest rate expectations, with the latest data releases solidifying expectations of an interest rate increase from the ECB next week. The German 2-yr yield made a new (yield) high for the year above the 1.80% level, pushed higher on the back of better than expected labour market data from Germany, together with the stronger than expected inflation estimate for the eurozone, which jumped to a near two-and-a-half year high at 2.6%. The rolling 3-mth correlation between EUR/USD and the 2-yr swap spread (Eurozone minus US) has been rising for most of March, taking it to a near 5-wk high at 0.61, increasing the euro’s resilience to the deterioration in credit conditions in the periphery. Swedish krone aside, the euro is shaping up to be the best-performing currency of the majors in the first quarter of the year. Whether this stellar performance continues during the second quarter largely lies with the ECB. Whilst a tightening next week looks pretty much assured, it’s the degree of hawkishness that will determine the extent to which the euro can make further gains.

Yet another reason to like the Aussie. As if the currency did not have enough going for it, there is yet another reason to like the Aussie that perhaps does not get the attention it deserves. Demand for government bonds down under remains exceptionally strong, with an average bid-cover ratio of 4.36 times at auctions so far this year. Offering decent interest rates, with a strong currency, a healthy public sector balance sheet and amidst growing demand from the big four local banks keen to meet more stringent Basel III rules on capital adequacy, it is understandable that Aussie bonds are so popular with investors. Because the public sector finances are in sound shape (debt/GDP of just 8%), the supply of new government paper is constrained, helping to support bond prices. The 10-yr yield in Australia is currently 5.46%, compared with a cash rate of 4.75% – the curve’s flatness attests to the strength of underlying demand. The Australian government’s debt dynamics provide encouragement for offshore investors as well, at a time when there are serious questionmarks over the debt-servicing abilities of many governments in other advanced economies.

China tries to slow yuan deposit flood into Hong Kong. Today’s little-reported announcement by the PBOC that it was lowering the offshore yuan deposit rate by 25bp to just 0.72% is clearly an attempt to arrest the staggering growth in yuan accumulation in Hong Kong. In February, yuan deposits in Hong Kong soared to CNY408bn ($62bn), up more than 500% in the past year. Importantly, with interest rates climbing on the mainland, the yuan interest-rate differential between China and Hong Kong is widening all the time. The yuan has been strengthening gradually over the course of this week ahead of today’s G20 meeting in Nanjing, where there is bound to be further pressure on the Chinese authorities to permit a faster rate of currency appreciation. The PBOC set the reference rate at 6.5564 overnight, the strongest level since mid 2005.

The first day of the month has seen the yen and also Swiss franc losing ground during Asia trade, with leveraged funds taking the opportunity to place fresh risk positions. This is the seventh day of USD/JPY gains, currently at 5-wk highs above the 83.50 level. The overnight release of the all important Tankan survey for Q1 was not a major factor in the yen selling.   In general, the survey showed confidence in the business sector holding up well but, as yet, we don't know how many of the responses were taken before and after the earthquake.   Meanhwhile,…