Latest
You are at:Home»Daily Look»Cryptos are consolidating and Bitcoin is best-positioned to gain

Cryptos have been reeling from the latest downfall and are consolidating at lower levels. Bitcoin is trading below $8,000, Ethereum under $250, and Ripple is struggling with $0.40. Such quiet periods of consolidation – either after a rally or after a fall – are usually followed by a surge in volatility.

The most recent cryptocurrency news has been positive and addresses one of the pain points of digital assets. Tadge Dryja, the co-author of the lightning network that allows bitcoin to scale up, has released a new research paper that suggests novel ways of improving transaction performance. If Bitcoin becomes faster, other cryptos will follow – as BTC has been leading prices higher in recent months.

And where are prices heading to?

This is what the Crypto Confluence Detectorshows in its latest update: 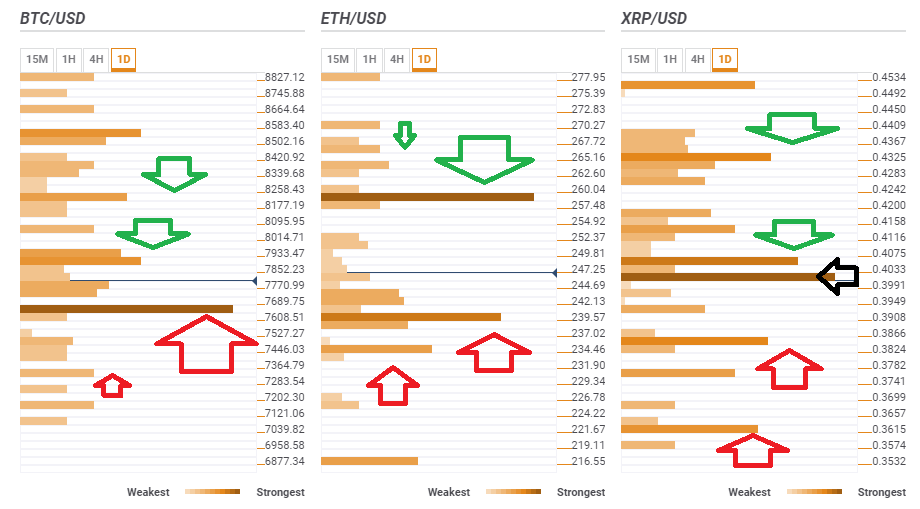 King Bitcoin enjoys the most favorable technical outlook – it is perched well above a dense cluster of support lines at $7,650. This includes the all-important Fibonacci 38.2% one-week, the Fibonacci 23.6% one-day, and the Bollinger Band 1h-Lower.

However, if it loses $7,650, the next support lines are weak. The next noteworthy cushion is only at $7,320 where the Pivot Point one-week awaits the granddaddy of cryptocurrencies.

BTC/USD faces some resistance at $7,887 which is the convergence of the Simple Moving Average 10-4h, the Pivot Point one-week Support 1, the Fibonacci 61.8% one-day, and the previous week’s low.

Further above, the digital asset would target $8,210 where the Fibonacci 23.6% one-month and the Bollinger Band one-day Middle converge.

ETH/USD faces an uphill battle at $259

ETH/USD has support at $239 where we note the convergence of the Fibonacci 38.2% one-month, the previous weekly low, and the Fibonacci 23.6% one-day.

Vitalik Buterin’s brainchild would find further support at $234 that is the meeting point of the BB 4h-Lower, the BB 1d-Lower, and the previous daily low.

Get the 5 most predictable currency pairs
Previous ArticleUSD/CHF hangs near 2-1/2 month lows, bulls manage to defend 0.9900 mark ahead of US data
Next Article WTI under pressure near $ 53 mark ahead of EIA data