The Enjin Coin price surged nearly 35% on Wednesday after Coinbase announced that it would list ENJ and three other coins. The spike has pierced through a critical resistance level, triggering a massive bullish outlook.

The Enjin Coin price broke out of a bull flag on Wednesday as it skyrocketed 35% after popular US-based exchange Coinbase listed it. This technical formation is a continuation pattern that contains an initial spike in price known as a flag pole and a consolidation in the form of a descending channel, referred to as the flag.

A decisive close above the flag’s upper trend line at $2.51 forecasts a 65% upswing to $4.14. This target is obtained by adding the flag pole’s height to the breakout point.

Therefore, a continuation of this bullish momentum could propel ENJ toward the 127.2% Fibonacci extension level at $4.14. However, this trajectory has pit stops at $3.08 and $3.60, and the bulls could take a breather around these areas. Hence, investors need to keep a closer eye on these levels. 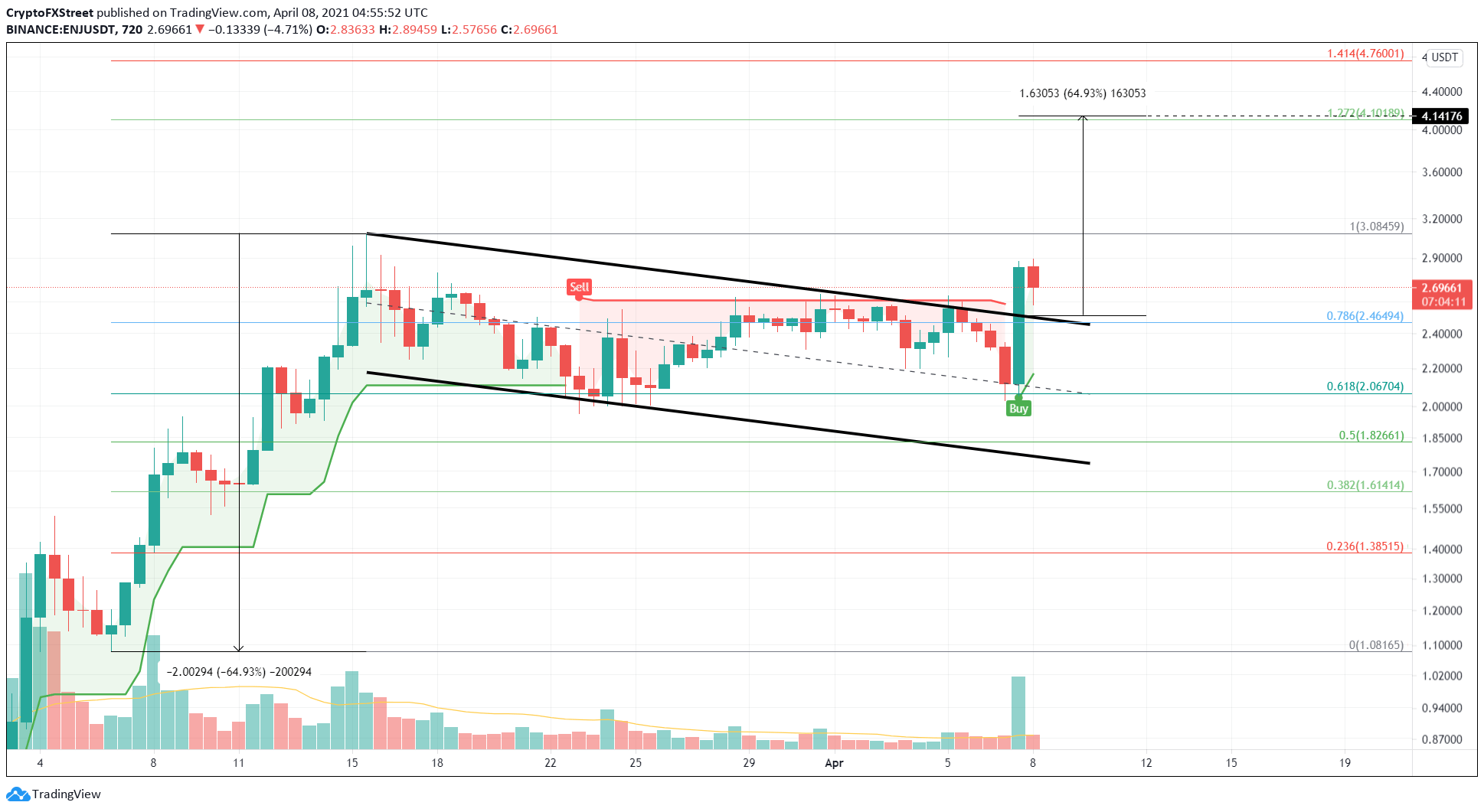 Further adding a tailwind to this bullish narrative is the lack of resistance as seen in IntoTheBlock’s In/Out of the Money Around Price (IOMAP) model.

A stable demand barrier is present at $2.45, where roughly 6,300 addresses hold nearly 90.8 million ENJ tokens. Hence, any short-term bearish momentum is likely to bounce off this level.

Additionally, the whales holding between 1,000,000 and 10,000,000 ENJ have begun accumulation after constantly off-loading their investments since March 2. At the time of writing, four new investors belonging to this category have joined the Enjin Coin network, which is a 6.7% increase.

This growth represents an increased interest among high net worth market participants in Enjin Coin at the current price levels.

All in all, the Enjin Coin price looks bullish and shows signs of surging toward the intended target at $4.14. However, if investors decide to book profits, it would increase the selling pressure and trigger a descent.

If this move re-enters the consolidation phase and produces a decisive close below $2.40,   the bullish outlook stands to be invalidated. In such a scenario, investors can expect ENJ to slide 13% toward the 61.8% Fibonacci retracement level at $2.06.