Latest
You are at:Home»Daily Look»EU elections could have been worse, EUR/USD holds its ground

Center-right and center-left parties have lost their majority in the EU elections, but the votes did not all go to populist parties as some had feared. Centrist liberal and green parties have gained ground as well, and the result is a fragmented EU Parliament. Far-right parties have won in France and Italy, but traditional mainstream parties dominated Germany and Spain.

The outcome has allowed the euro to hold its ground around 1.1200, awaiting further political reactions and the return of liquidity — both the US and the UK are on holiday today.

Among the main countries, political developments in Germany may make a difference for the euro. The center-left SPD came out third, lagging behind both Angela Merkel’s center-right CDU and the Greens. The beaten socialists may come to a conclusion that they have been punished for forming part in Merkel’s grand coalition and retire — perhaps triggering the Chancellor’s resignation.

Merkel has already stepped down from leading her party and plans to stay until the next national ballot in 2021. However, a breakdown of her government may bring her reign to an end. The long-serving leader is seen as a beacon of stability and centrism. Annagret Kramp-Karenbauer (AKK) which took over as CDU leader, tacks to the right and may find it impossible to govern. The prospects of fresh elections followed by prolonged negotiations in the largest economy may weigh on the common currency.

Outside Europe, US President Donald Trump is visiting Japan and has commented on China, saying that the world’s largest economies will eventually have a deal some time in the future, but the US is not ready to reach an agreement with China at the moment. His mixed messages do not improve the market mood. 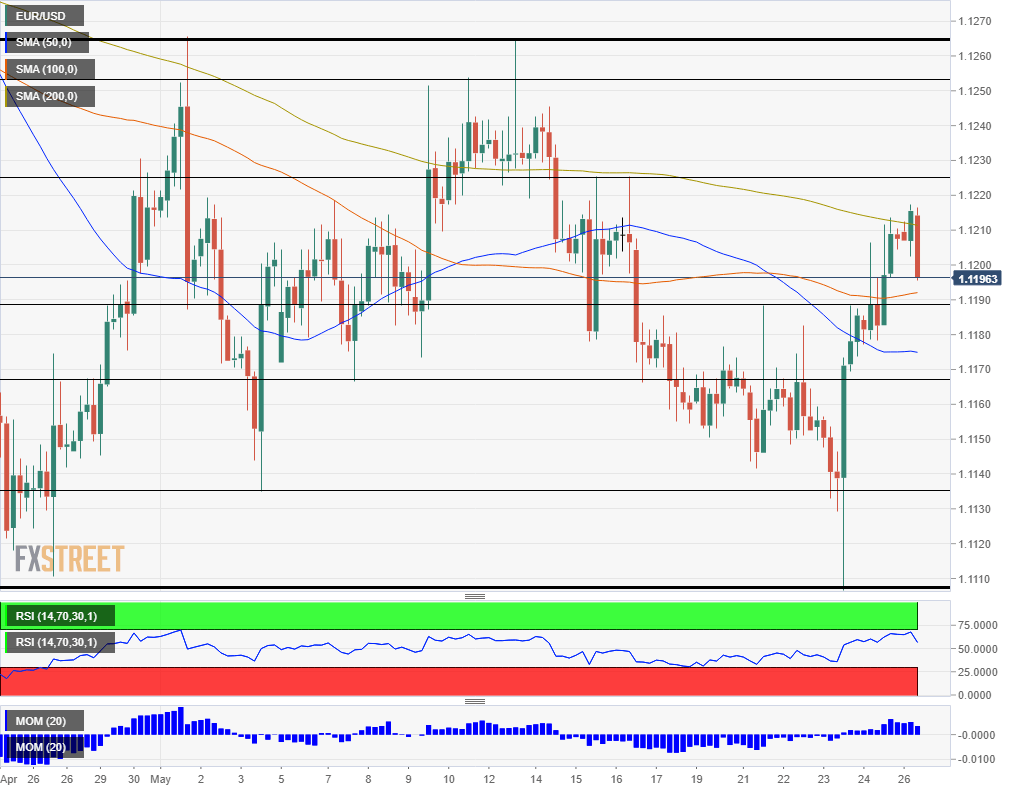 EUR/USD is battling the 200 Simple Moving Average on the four-hour chartwhile trading below the 100 SMA and the 50 SMA. Momentum remains to the upside, but the Relative Strength Index is off the highs.

Overall, the technical picture is mixed.

Resistance awaits at 1.1225 which capped the currency pair twice in mid-May. It is followed by 1.1250 that held it down earlier and then by the all-important triple-top at 1.1265.

Get the 5 most predictable currency pairs
Previous ArticleUK Labour’s McDonnell: Labour must back ‘public vote’ on Brexit after EU vote
Next Article USD/CNY to drop back to 6.75 by end-2019 – ING