Latest
You are at:Home»Weekly Forex Forecasts»EUR/USD Forecast»EUR/USD Forecast Aug. 3-7 – Euro’s surge continues
The German economic outlook improved for a third straight month, as Ifo Business Climate rose from 86.2 to 90.5 in July. However, other German data was soft. CPI fell by 0.5%, its second decline in three months. GDP in Q2 plunged 10.1%, worse than the estimate of -9.0%. In the Eurozone, CPI rose to 0.4%, up from 0.3%, while the core figure improved to 1.2%, up from 0.8%. Eurozone GDP fell by 12.1% in Q2, after a decline of 3.8% beforehand.
In the US, it was not a great week. Durable goods data softened in June. The headline came in at 7.3%, down from 15.8%. The core reading fell from 4.0% to 3.3%. The Fed maintained the benchmark rate at zero and had a dovish market for the markets, as expected.  Policymakers reiterated their commitment to “act as appropriate to support the economy”, but did not announce any new policy measures.
The initial GDP read for Q2 was dismal. The economy contracted by 32.9%, close to the estimate of 34.5%. The week ended with UoM Consumer Sentiment falling to 72.5, down sharply from 78.1 beforehand. 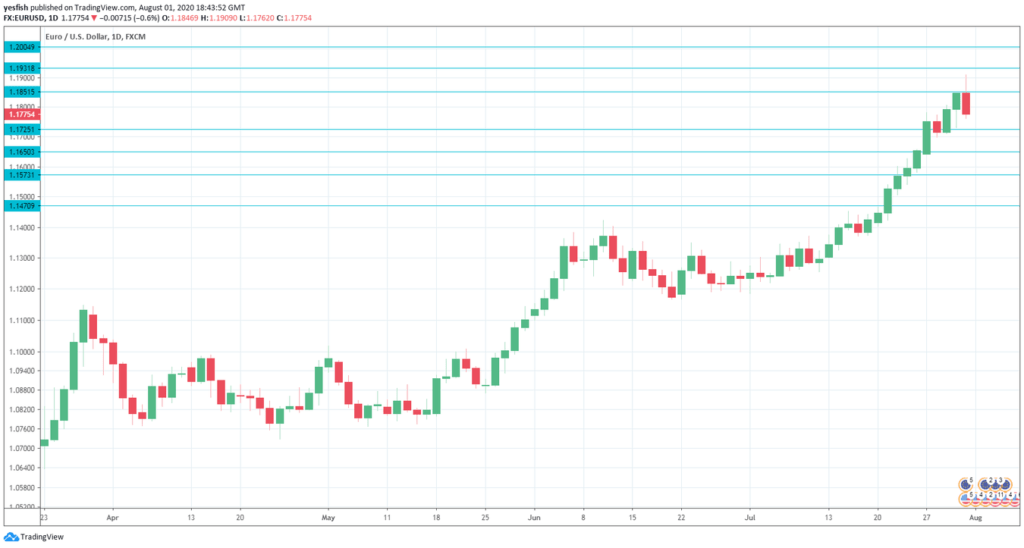 We start with resistance at 1.2004, just above the psychologically important 1.20 level.

1.1850 has switched to a support role following strong gains by EUR/USD last week.

1.1725 remains relevant. It is the first line of support.

1.1573 (mentioned last week) has some breathing room in support.

1.1470 has held since mid-March. It is the final support line for now.

I remain bullish on EUR/USD

The US dollar continues to retreat. Last week, EUR/USD climbed to its highest level since May 2018. With many parts of the US struggling with Covid-19, the dollar’s woes could continue this week.