In the US, the highlight was the Federal Reserve policy meeting. As expected, the Fed kept interest rates close to zero. Of more interest to investors was the Fed message that it will not raise rates before 2023, under its new inflation target, which allows inflation to overshoot 2% without triggering a rate hike.

US retail sales slowed significantly in August. The headline reading dropped to 0.6%, down from 1.2%. Core retails sales came in at 0.7%, down sharply from 1.9%. This points to weakness in consumer spending, which is a key driver of economic growth. 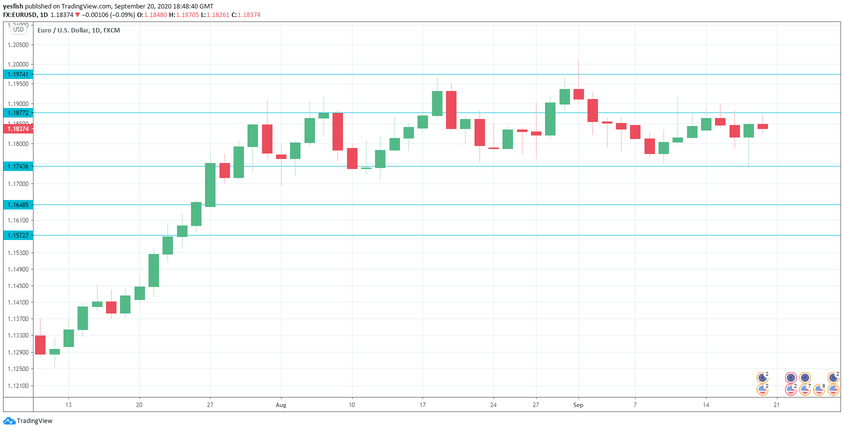 I remain neutral on EUR/USD

Investors have not shown any preference for either currency, leaving EUR/USD directionless over the past two weeks. This lack of activity could continue next week as well.

ECB to review bond-buying tool launched in response to pandemic

EUR/USD showed movement in both directions but ended the week unchanged. There are five events in the upcoming week, including manufacturing and services PMIs. Here is an outlook at the highlights and an updated technical analysis for EUR/USD.   Eurozone Industrial Production slowed to 4.1%, down from 9.1% beforehand. German ZEW Economic Sentiment improved to 77.4, up from 71.5 points. Eurozone CPI declined by 0.2%, down from 0.4% in the previous release. It marked the first decline since April 2016. The core reading slowed to 0.4%, down sharply from 1.2%. In the US, the highlight was the Federal Reserve policy…