EUR/USD weakened for a second week in a row, as speculation of a rate cut grew, but nothing is certain. Rate cut or no rate cut? This is the question and we will get answer this week in one of the more important ECB decisions. In addition, German inflation, employment and retail data, Manufacturing PMIs are additional highlights of a very busy week.  Here is an outlook on the main market-movers awaiting us and an updated technical analysis for EUR/USD.

After getting a rate cut hint from the hawkish Bundesbank, other officials and analysts shook the markets with speculation. The same Bundesbank reportedly returned to its roots by not backing the OMT backstop. However, not only peripheral countries are struggling Spain (Spanish updated unemployment rate: 27.2%) –  German PMIs looked bad and the Eurozone continued to stagnate in April, raising concerns for a further economic downturn in the Euro-zone. Also the US isn’t doing well, as the strong start to the year wasn’t that strong: GDP rose by only 2.5% on an annual basis.

Update: Italy has formed a government, which will probably be sworn in on Monday. This could have an initial positive impact on EUR/USD, before markets refocus on the ECB. German Preliminary CPI declined 0.5%, well below the estimate of -0.2%. Eurozone Retail PMI came in at 44.2 points. Italian 10-year bonds dropped below 4%, posting a yield of 3.94%. German Retail Sales dropped 0.3%. just  below the forecast of -0.2%. GfK German Consumer Climate increased to 6.2 points, beating the estimate of 5.9 points. French Consumer Spending gained 1.3%, easily beating the  estimate of 0.2%. Spanish Flash GDP dropped 0.5%, matching the forecast. Geman Unemployment Change was up 4 thousand, higher than the estimate of 2 thousand. The Italian Monthly Unemployment Rate came in at 11.5%, beating the estimate of 11.7%. Eurozone CPI Flash Estimate gained   1.2%, missing the estimate of 1.6%. Eurozone Unemployment Rate hit another record, rising from 12.0% to 12.1%. Italian Preliminary CPI rose 0.1%. The estimate stood at 0.3%. EUR/USD is steady, as the pair was trading at 1.3073. Most analysts expected the ECB to lower rates, and the ECB followed through, cutting rates from 075% to 050%. It was the first rate drop since July 2012. There is a follow up press conference hosted by ECB head Mario Draghi. Spanish manufacturing PMI came in at 44.7 points, very close to the estimate of 44.6 points. Italian Manufacturing PMI improved, climbing to 45.5 points. The estimate stood at 44.9 points. Eurozone Final Manufacturing PMI came in at 46.7 points, just above the forecast of 46.5 points. French 10-years bonds posted a yield of 1.81%. This was lower than the 1.94% yield of the previous release. EUR/USD has moved higher, and is testing the 1.32 level. The pair was trading at 1.3194. 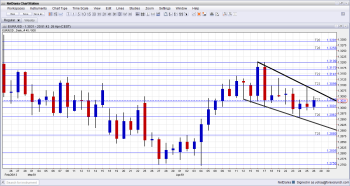 Euro/dollar started the week with a downfall, and found support around 1.2960 (mentioned last week). IT then managed to recover and even make an attempt on the 1.31 line before falling back under 1.3050. The round 1.30 served as a magnet for the pair.

Below, 1.3290 served as resistance before the pair collapsed in May, After many failures to break higher, the euro finally pushed through.  1.3255 provided support during January 2013 and also beforehand. A recovery attempt failed to reconquer this line.

1.32 is a clear top  after capping the pair twice in April 2012. This is a round number as well. 1.3170, which was the peak of September, served as support for the pair after the break in December but it is weaker now.

The very round 1.30  line  was a tough line of resistance for the September rally. In addition to being a round number, it also served as strong support. It served as a pivotal line of late.  1.2960  provided some support at the beginning of the year and also in September and October – the line is strengthening once again after working as a triple bottom. It remains an important line on the downside.

EUR/USD is beginning to trade in a downwards channel, which is not fully parallel, in the last few weeks. This will be interesting to watch as well.

The economic situation in Europe looks worse with every day that passes by, and signs of weakness are also evident in the core of the core: Germany. Even if the ECB doesn’t cut the rates, it will have to acknowledge the bad conditions and the high exchange rate. A cut of the deposit rate was not ruled out by Draghi in the past, and cannot be ruled out now. See more in the ECB preview.

And while the US isn’t doing too well either, the unemployment rate is still significantly lower and the economy is still growing. The market will shake on the Fed decision and the Non-Farm Payrolls always cause a storm, but the focus certainly shifts to the euro-zone now.

EUR/USD weakened for a second week in a row, as speculation of a rate cut grew, but nothing is certain. Rate cut or no rate cut? This is the question and we will get answer this week in one of the more important ECB decisions. In addition, German inflation, employment and retail data, Manufacturing PMIs are additional highlights of a very busy week.  Here is an outlook on the main market-movers awaiting us and an updated technical analysis for EUR/USD. After getting a rate cut hint from the hawkish Bundesbank, other officials and analysts shook the markets with speculation. The…