EUR/USD had an exciting week, rising to highs at first and eventually ending the week lower. Purchasing managers’ indices  from France, Germany and the EU, as well as the German Ifo Business Climate are the highlights of this week. Here is an outlook for the events moving the single currency and an updated technical analysis for EUR/USD.

The rise was mostly based on the difference between central banks: the US and Japan continue with QE programs while the ECB is practically tightening. However, one hint of a rate cut was enough to send the euro down and remind everybody about the harsh reality, not only in the periphery, but also in the core. Disappointing data was released from Germany. The ZEW Economic Sentiment, slumped badly, dropping from 48.5 points to 36.3 points, way below the 41.5 points. Will the German economy succumb to euro recession? Let’s start: 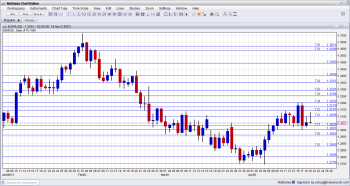 Euro/dollar began the week by trading within a limited range, between the 1.3030 and 1.31 lines (mentioned last week). It then leaped and challenged the round 1.32 line before falling all the way to 1.30. The roller coaster continued and the pair eventually closed at 1.3051.

1.34 was a stubborn cap during the spring of 2012 and continued its stubborn stance in January 2013 – the line now serves as resistance. These are the head and shoulders lines. 1.3350 was a peak in January 2013 and worked very nicely as support during February. The line is weaker now.

Below, 1.3290 served as resistance before the pair collapsed in May, After many failures to break higher, the euro finally pushed through. 1.3255 provided support during January 2013 and also beforehand. A recovery attempt failed to reconquer this line.

1.32 joins the chart after capping the pair twice in April 2012. This is a round number as well. 1.3170, which was the peak of September, served as support for the pair after the break in December but it is weaker now.

The very round 1.30 line was a tough line of resistance for the September rally. In addition to being a round number, it also served as strong support. It is becoming stronger. 1.2960 provided some support at the beginning of the year and also in September and October – the line is strengthening once again after working as a triple bottom. It remains an important line.

Lower, 1.2880 worked in both directions during 2012 and was the beginning of the uptrend support line. The recent breakdown turned the line into strong resistance. Lower, 1.2805 was the bottom border of the wide 1.2805-1.3170 that characterized the pair’s trading for a long time.

Below, 1.2750 worked as a separator of ranges during November, and stopped the pair’s drop in March. This is a key line on the downside, as clearly shown in the first week of April. This is followed by the round number of 1.27, which is a minor line.

While Japan’s  comprehensive QE program only received a slap on the wrist from the G-20, the positive impact is limited. Europe has a wide range of issues: from debt crises in Cyprus, Slovenia and Portugal, through a political crisis in Italy (which saw interesting developments over the weekend) and up to weakness in core countries. And even though indicators in the US have soured, the US GDP release will probably be a reminder that the US is enjoying uninterrupted growth while Europe is in a recession.

If you have interest in a different way of trading currencies, check out the weekly binary options setups, including EUR/USD and more. Further reading:

Get the 5 most predictable currency pairs
Previous ArticleG-20: Japan Gets a Small Slap in the Wrist: USD/JPY
Next Article USD/CAD Outlook April 22-26