Euro/dollar  slid within the range in a week that saw a deterioration in the global mood. The upcoming week features the highly anticipated EU Summit among other events. Will we see progress with Spain and Greece?   Here is an outlook for the upcoming events and an updated technical analysis for EUR/USD.

Spain’s credit downgrade by S&P added to the nation’s troubles. The potential Spanish bailout request does not seem that close now. One of the factors that weighs on such a request is the statement by Merkel’s adviser that Germany is actually thinking about its banks when lending a hand to other countries. Together with the depressing forecasts by the IMF, these dark clouds overshadowed potential progress in Greece. In the US, another positive jobs figure caused controversy, again. The US uncertainty will likely step aside for an important week in the debt crisis.

Updates: Italian Trade Balance disappointed, posting a small deficit of 0.6 billion euros. The market estimate stood at a surplus of 2.57B. German ZEW Economic Sentiment was better than forecast, climbing nicely to -11.5 points. The estimate stood at -14.6 points. Euro-zone came in at 2.6%, just below the forecast of 2.7%. Euro-zone Core CPI climbed 1.5%, a notch lower than the estimate of 1.6%. Euro-zone ZEW Economic Sentiment improved to -1.4 points, but this was still below the market forecast of -1.1 points. Euro-zone Trade Balance looked sharp, as the surplus widened to 9.9 billion euros. The estimate stood at 8.4B. The euro continues to climb, as EUR/USD was trading at 1.3052. The European Economic Summit is being held in Brussels on Thursday and Friday, as 27 European leaders convene for talks. Spain’s 10-year bond yield continues to drop, posting an average yield of 5.46%. The Euro was steady after its strong rally earlier in the week. EUR/USD was trading slightly above the 1.31 line, at 1.3108. 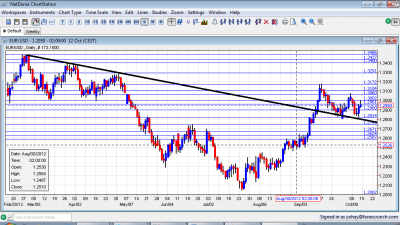 â‚¬/$ started with a challenge of the 1.3060 line (mentioned last week). But after it failed to break higher, the pair went from weakness to weakness and lost the next lines, 1.30, and 1.2960, that quickly turned into resistance. All in all, not a positive week.

We start from lower ground, mostly due to the narrower ranges. 1.3480 is very important resistance: it was the peak seen in February. At the time, it was very stubborn. 1.3437 is of historic significant and is a minor line now.

1.3060, was a clear separator in May and also had an important role beforehand. It slowed the rally in September 2012 and is still very relevant after capping a recovery attempt in October.  The very round 1.30 line was a tough line of resistance for the September rally. In addition to being a round number, it also served as strong support. It is now becoming more pivotal and a battleground.

It is closely followed by 1.2960 which provided some support at the beginning of the year and also in September and October.  1.29 is a round number that also provided support when the euro was tumbling down back in May.

1.2814 was the peak of a recovery attempt in May and also capped the pair in September 2012. A slide lower in October 2012 almost met this line. 1.2750 capped the pair after the Greek elections and also had a similar role in the past. It is weaker now.

1.2670 was a double bottom during January and was the high line of the recovery before the Greek elections in June. It also capped the pair at the beginning of July 2012.  1.2624 is the previous 2012 low and remains important as also seen at the end of August, when it served as resistance.

Below, 1.2587 is a clear bottom on the weekly charts but after holding the pair down for a while, but it is weak now.

The line starting from February at the 1.3486 peak was formed in March and April. The rally sent the pair surging through this level, as the graph shows. The pair flirted with this line again and again. the recent move towards this line proved to work again as sending the pair away from the line and higher.

I am bullish on EUR/USD

While a Spanish bailout request  isn’t likely before October 21st), Spain could still surprise, especially if yields rise. In general, we can expect the EU Summit to help the euro, given such past events. Leaks towards the event and big statements at its end usually boost markets in the short term. Implementing decisions and making real progress are other things. In addition, the economic situation in Europe, including in the core, does not show positive signs, to say the least. So for this week, there is room for rises. Later, it doesn’t look that good.

Euro/dollar  slid within the range in a week that saw a deterioration in the global mood. The upcoming week features the highly anticipated EU Summit among other events. Will we see progress with Spain and Greece?   Here is an outlook for the upcoming events and an updated technical analysis for EUR/USD.   Spain's credit downgrade by S&P added to the nation's troubles. The potential Spanish bailout request does not seem that close now. One of the factors that weighs on such a request is the statement by Merkel's adviser that Germany is actually thinking about its banks when lending…