Euro/dollar  recovered after the falls, but didn’t really go very far. It seems that some progress has been made both in Spain and in Greece, but uncertainty remains high. Meetings of the Eurogroup and a speech by Mario Draghi are the main events in a busy week. Here is an outlook for the upcoming events and an updated technical analysis for EUR/USD.

Mario Draghi didn’t provide any big news in the rate decision, apart from clarifying that the bond buying program is fully ready, awaiting a Spanish aid request, that hasn’t happened so far. Will Spain wait another week, after regional elections? In Greece, there seems to be an agreement about privatization but many other issues remain open. The government estimates that its coffers will run dry by the end of November. In the US, the positive NFP and unemployment rate improved the global mood and hurt the dollar, but this could eventually backfire.

Updates: Chancellor Angela Merkel is in Athens on Tuesday, as the Greek capital braces for wide demonstrations. The Euro-zone financial ministers are meeting in Luxembourg, with the Greek and Spanish bailouts at the top of the agenda. In Brussels, ECB head Mario Draghi testified before the Committee on Economic and Monetary Affairs of the EU. France’s government  budget deficit increased to    97.7 billion euros. This was up from a deficit of 85.5B in the previous release. The French trade deficit worsened in September, climbing to 5.3 billion euros. This exceeded the estimate of a deficit of 4.9B. Italian GDP declined 0.7% in Q2, slightly better than the estimate of a 0.8% drop. The markets got some much-needed good news on Wednesday from European releases. German WPI climbed 1.3%, beating the estimate of 0.4%. French Industrial Production jumped 1.5%, a four-month high. The market estimate stood at -0.2%. Italian Industrial Production  shot up 1.7%, its largest gain since last October. The markets had expected a decline of 0.5%.  IMF released a Global Finance Stability Report which rattled market sentiment. The IMF issued  its Global Finance Stability Report. The  report reduced  a previous  IMF  forecast for global growth from 3.5% to 3.3%, and expressed pessimism about the situation in Europe. Without drastic action to combat the debt crisis, the report stated, the capital flight out of Europe will worsen, and deteriorating economic conditions could lead to the breakup of the Euro-zone. The euro initially dropped following the report, but has since rebounded, as the pair tests 1,29. EUR/USD was trading at 1.2890. The euro is trading higher following an S&P downgrade to Spain, as the markets are optimistic that the credit rate cut will force Spain to seek a bailout. EUR/USD pushed above 1.29, as the pair was trading   at 1.2922. German Final CPI came in at a flat 0.0%, as expected. French CPI disappointed, dropping by 0.3%. The estimate stood at 0.1%. The ECB Monthly Bulletin was released earlier on Thursday.  The report stated that  economic indicators confirm a weak Q3 for the Euro-zone. The report also noted that the OMT  has helped reduce tensions over  the debt crisis, but governments must take further actions. 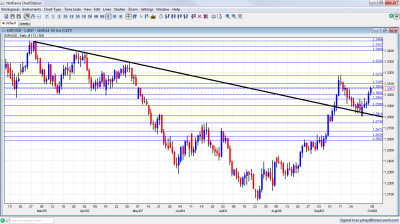 â‚¬/$ started the new quarter with a leap, but couldn’t break above the 1.2960 (mentioned last week) at first. Towards the end of the week, the pair finally broke higher and also crossed the important 1.30 line.

The very round 1.30 line was a tough line of resistance for the September rally. In addition to being a round number, it also served as strong support. It is now becoming more pivotal and a battleground. It is closely followed by 1.2960 which provided some support at the beginning of the year and also in September.

1.29 is a round number that also provided support when the euro was tumbling down back in May. 1.2814 was the peak of a recovery attempt in May and also capped the pair in September 2012.

The line starting from February at the 1.3486 peak was formed in March and April. The rally sent the pair surging through this level, as the graph shows. The pair flirted with this line again and again. the recent move towards this line proved to work again as sending the pair away from the line and higher.

Uncertainty remains high in Europe, and it seems that no breaking news will be announced until we get closer to the October 18-19 summit. This is especially relevant regarding Greece, where negotiations are endless. Even if Spain finally makes the bailout request (although it isn’t likely before October 21st), this move is mostly priced in, and we could get a “sell the fact” reaction.

In the US, the jobs reports was relatively positive, especially when looking at the big revisions. This will not impact the Fed decision, which is too close to the elections, but will certainly impact the political debate.

For an alternative technical view on the euro after the NFP, see  EUR/USD Headed for Even Higher Resistance? by Matthew Lifson.

Euro/dollar  recovered after the falls, but didn't really go very far. It seems that some progress has been made both in Spain and in Greece, but uncertainty remains high. Meetings of the Eurogroup and a speech by Mario Draghi are the main events in a busy week. Here is an outlook for the upcoming events and an updated technical analysis for EUR/USD.     Mario Draghi didn't provide any big news in the rate decision, apart from clarifying that the bond buying program is fully ready, awaiting a Spanish aid request, that hasn't happened so far. Will Spain wait another…