Euro/dollar  had another roller coaster week which ended in a fresh 16 month low.The upcoming week features the important ZEW survey and inflation numbers in addition to other events. Here’s an outlook for the upcoming events, and an updated technical analysis for EUR/USD.

At first, things were looking good for the euro – the single currency enjoyed Draghi’s confidence regarding the success of the LTRO operation. The aversion of a credit crunch is far from certain, after Friday’s events. France lost its perfect AAA rating, together with other euro-zone countries. In addition, Greece is on the brink of default after the talks about a haircut broke down. Will the ECB replace the private sector and take a hit on Greek bonds? Greek banks are in worse shape than estimated. Together with the breakdown of Greek PSI talks, the Greek troubles are not priced in. While Germany and Spain look better (and this pushes the euro higher), Italy remains in trouble, Portugal moves closer to default and Greece is widely seen as defaulting.

Updates: EUR/USD managed to tick up above 1.2660, but it didn’t get too far. The new troubles are awaiting US markets, which are closed for the day. Euro/dollar continues north, enjoying the rise in Chinese GDP, a positive German ZEW sentiment and a good Spanish bond auction. The pair is within the 1.2660 – 1.2760 range. Strong Spanish and French auctions, together with hope for Greece, sent the euro above resistance. 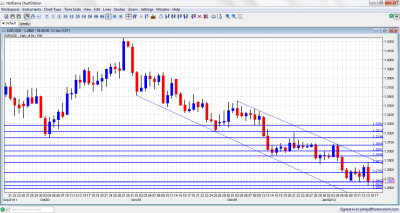 We begin from lower ground this time. 1.3212 held the pair from falling and switched to resistance later on.  Very important resistance is at 1.3145 which was the lowest point recorded in October 2011, was only broken for a short time from the other side.

1.3085 was the top border of a very narrow range that characterized the pair towards the end of 2011. It also provided support back in December 2010 and had a pivotal role. The round number of 1.30 is psychologically important and also worked as some support. After the breakdown, it was shattered and is now weak.

The relatively new low of 1.2945 is still important, and now as clear resistance. 1.2873 is the previous 2011 low set in January, and still provides resistance. This was seen over and over again.

Even lower, 1.2520 is another minor support line, before the round number of 1.24, which was of importance a long time ago.

The pair can be seen as trading in a parallel, yet wide channel. Downtrend resistance is more significant than downtrend support, even thought it dates back only to December. Downtrend support starts in October, but is far from the pair at the moment.

The debt crisis has certainly worsened now. The breakup of talks between the banks and Greece paves the road for a Greek default, and it might turn ugly. Also the downgrade of France and Austria has severe consequences on the whole bailout concept, as the EFSF bailout fund will likely see a downgrade.

The ECB managed to buy time with the banks through the LTRO, but will have to step up its efforts: either by taking a hit on its Greek bonds, or by buying more peripheral bonds to help stabilize the system. Either way, this is a lose lose situation for the euro, that is not fully priced in.

Euro/dollar  had another roller coaster week which ended in a fresh 16 month low.The upcoming week features the important ZEW survey and inflation numbers in addition to other events. Here's an outlook for the upcoming events, and an updated technical analysis for EUR/USD. At first, things were looking good for the euro - the single currency enjoyed Draghi's confidence regarding the success of the LTRO operation. The aversion of a credit crunch is far from certain, after Friday's events. France lost its perfect AAA rating, together with other euro-zone countries. In addition, Greece is on the brink of default after…

GBP/USD Price Analysis: Bulls Geared Up for 1.38 amid Hawkish BoE