After Euro/Dollar couldn’t break higher, it now expects a busy week. Here’s an outlook for the European events and an updated technical analysis for EUR/USD.

Axel Weber pushes the Euro higher, and he’ll have another chance to express his hawkish views this week. Will he help the common currency again? Let’s start: 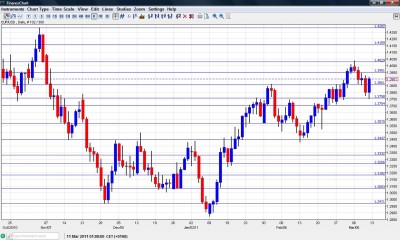 Euro/Dollar made an attempt to break above the tough 1.4030 line (discussed last week). After the failure to break higher, the pair fell all the way to around 1.3760 before making an impressive last minute recovery and closing at 1.3900.

Looking up, initial resistance is found at 1.3950. This was a pivotal line when the pair was trading higher, and recently served as support. It’s followed by the stubborn 1.4030 line. While the round number of 1.40 is eyed by the ECB, triggering a comment by Trichet about “excessive volatility in currency markets, real resistance is only at 1.4030.

Looking down, immediate support is found at 1.3860. It was a  strong line of resistance and the highest level in 2011 until being broken. It’s role has weakened now. Lower,  1.3760 just proved it’s importance now. It had the opposite role earlier this year.

I turn bearish on EUR/USD.

A bailout for Portugal is getting very close. While the markets still focus on pricey oil and a rate hike in Europe, the debt crisis will probably assume center stage quite soon.

Here are some more recommended reads for this pair:

After Euro/Dollar couldn't break higher, it now expects a busy week. Here's an outlook for the European events and an updated technical analysis for EUR/USD. Axel Weber pushes the Euro higher, and he'll have another chance to express his hawkish views this week. Will he help the common currency again? Let's start: EUR/USD daily chart with support and resistance lines on it. Click to enlarge: Industrial Production: Monday, 10:00. The level of production in the whole Euro-zone squeezed last month by 0.3% after a bigger rise beforehand. Industrial output has been better in Germany and France this month. As they…