Even more risk leaves the table

The combination of Europe’s sovereign debt crisis and growing global recovery concerns has weighed further on risk appetite over recent days. Overnight, the EUR fell to near 1.41, not helped by comments from a Greek deputy who claimed that parts of the austerity package may not pass when Parliament votes over the next couple of days. This followed a suggestion on Friday that more members of Greek PM Papandreou’s Pasok party are likely to oppose the austerity package when the vote is taken on Wednesday. Hawkish rhetoric from the ECB’s Gonzalez Paramo on Friday also weighed on the euro – indeed, hawkish pronouncements on policy these days actually seem to engender a negative response, and understandably so. Surely, the ECB cannot be serious about hiking rates next month against the backdrop of Europe’s debt crisis? To make matters worse, Italian bank shares were pummelled on Friday after Moody’s suggestion yesterday that they were vulnerable should Italy’s credit rating be cut. 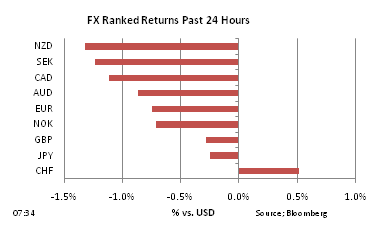 In the forex market, it is the dollar that has benefitted as investors seek to avoid risk. The dollar index is not far away from the critical 76.0 level which, if it manages to break through, would be extremely positive from a technical perspective. Repatriation by US investors ahead of the end of the half-year has also contributed to the dollar’s firmer tone in recent days. Against the backdrop of this heightened defensiveness by investors, the high-beta currencies continue to struggle; for instance, the Aussie has finally snapped the 1.05-1.10 trading band overnight, falling to 1.0425. Stocks continue to swoon, with the major Asian bourses down by around 1% overnight. Commodities are also suffering, especially oil, with the price of Brent crude declining another 2% overnight to below $104 a barrel. Just two weeks ago, Brent crude was trading at $120. Fixed income is attracting more money as investors reduce risk – the 10yr US treasury yield is now just 2.85%, down nearly 100bp from the high reached back in February.

Breathtaking complacency on US debt-limit issue. Thursday’s spectacular collapse of the bi-partisan US budget talks chaired by Vice-President Biden barely registered a murmur in financial markets, such is the unhealthy obsession with Europe’s sovereign debt crisis. The continuing complacency on this issue by both traders and investors is unsustainable with the Treasury’s drop-dead date of August 2nd fast approaching before it runs out of tricks for ensuring that the debt limit remains no more than $14.3trln. For their part, Republicans are demanding that the President becomes more involved in the fiscal debate, especially on the question of raising taxes. Apparently, the Biden talks had identified trillions of dollars of spending cuts, but the two parties had split once the Democrats had insisted on exploring tax increases. The Republican Party continues to link support for raising the debt limit to the implementation of a meaningful medium-term fiscal consolidation plan, a strategy that has been described as fraught with danger by various Fed officials including Chairman Bernanke. Both Moody’s and S&P have warned that America’s AAA credit rating is under close scrutiny should the threat of default fail to diminish over coming weeks. Unfortunately, the prospect of a proper budget deal emerging from this debt-limit debate is looking less likely. The Republican party is completely opposed to tax increases, while the Democrats will only sanction spending cuts that are relatively superficial. Sadly, as the August 2nd deadline approaches, the prospect of both a very unattractive fudge on this debt-limit question and no deal on fiscal policy increases. Both parties may just decide to agree to lift the debt limit slightly, in effect kicking both the fiscal and debt limit debate into either 2012 or beyond the next Presidential election. It would be a dreadful outcome but, given the political paralysis in Washington at present, the odds of it taking place are shortening each day.

US throws down the gauntlet to OPEC. On a day when Europe was again convulsing with the question of how to respond to the sovereign debt crisis, it was the decision of the International Energy Agency (IEA) to release 60m barrels of oil which really captured the attention of investors and traders. Brent crude, which on Friday was trading up at $114 a barrel, fell sharply in response to the announcement and is now trading at $104. Following OPEC’s contentious meeting two weeks ago, when the oil cartel could not agree to increase production, the IEA’s response is very provocative. The superficial justification for the IEA move is that Libyan production has ground to a virtual halt over the past couple of months but, to be frank, this is clearly just a ruse for the true motivation, which is to bring down the crippling price of oil. From a political perspective, President Obama has stepped in to allay growing calls for him to do more to support the economy. America will contribute one-half of the IEA’s 60m release of oil reserves – just a drop in the ocean given the immense 727m barrels currently held by the Strategic Petroleum Reserve. The move by the IEA is unprecedented. It represents only the third time that the agency has released stockpiles – the first was in 1991 during the Persian Gulf War, followed by another release after Hurricane Katrina in 2005. Although the IEA decision will be supported by Saudi Arabia, other members of OPEC such as Iran and Venezuela will not be especially pleased.  At a time when both the developed and developing world are suffering lower growth and higher inflation as a result of high energy costs, the IEA’s move has symbolic rather than practical significance. It turns out that 60m barrels represents 2/3 of the world’s consumption of oil on any given day. Even so, lower energy prices over coming months will provide all economies with a fillip for the second half of this year.

German Ifo steadies some nerves. Friday’s Ifo data out of Germany contributed to the improved market tone on Friday, after Thursday’s bloodbath. After soft PMI data for both the manufacturing and services sectors (and ZEW earlier in the week), there were fears that Germany was coming off the boil. Helpfully, the headline Ifo outcome actually registered a slight increase from what was already a high level although, not surprisingly, the expectations balance fell slightly to 106.3 from 107.4. The gap between the headline and expectations series is now at the widest level for nearly three years and we’ve only been wider than this on 9% of occasions over the past ten years. Therefore, there is a strong statistical case for expectations coming back and/or the headline series falling to narrow this gap. The answer as to where the shift comes from is most likely down to the near-term outlook for events in Greece and how the risks play out for the eurozone as a whole.

The combination of Europe's sovereign debt crisis and growing global recovery concerns has weighed further on risk appetite over recent days. Overnight, the EUR fell to near 1.41, not helped by comments from a Greek deputy who claimed that parts of the austerity package may not pass when Parliament votes over the next couple of days. This followed a suggestion on Friday that more members of Greek PM Papandreou's Pasok party are likely to oppose the austerity package when the vote is taken on Wednesday. Hawkish rhetoric from the ECB's Gonzalez Paramo on Friday also weighed on the euro -…