Latest
You are at:Home»Daily Look»GBP/USD has more room to fall as Boris goes left

Is the Conservative Party no longer the party of business? Prime Minister Boris Johnson has announced the government is canceling a corporate tax cut and shifting the money to the National Health Service. Taxing and spending is the hallmark of Labour-led, left-leaning government, not the Conservatives.

Johnson – speaking at the Confederation of British Industry’s conference – spooked investors. They have already been worried by his willingness to leave the EU without a deal – and are now equally worried Labour leader Jeremy Corbyn as well Johnson.

The pound has been retreating and has lost some 30 pips from the highs of 1.2985 reached earlier, as Johnson’s expanding double-digit poll-lead sent sterling higher.

The next GBP/USD moves

The pound is mostly moving and election-related developments. Comments from senior politicians and new surveys ahead of the December 12 poll have the greatest influence.

On the other side of the pond, the dollar awaits President Donald Trump’s reaction to the latest high-level talk between US and Chinese negotiators. Senior officials from the world’s largest economies held a video conference over the weekend and concluded it as “constructive.” However, details about the conversations and the probability of a trade deal are mostly in the hands of the president.

Trump has offered to appear before the impeachment inquiry, raising the political mercury in Washington, but traders are far more interested in tariffs. 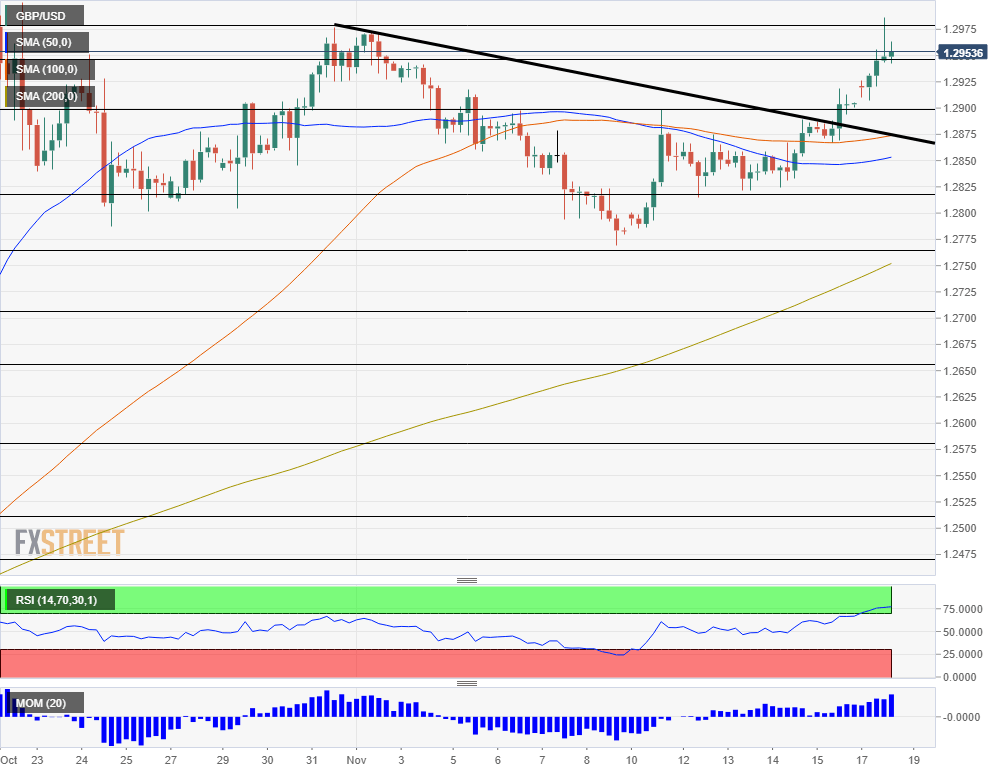 Despite the recent drop, the Relative Strength Index continues pointing to overbought conditions – implying a further downward correction. Only a drop of the RSI below 70 may relieve the pressure. Other indicators remain upbeat. Momentum remains to the upside, the pair is trading above the 50, and 100, and 200 Simple Moving Averages, and the sterling left the downtrend resistance line behind.

Get the 5 most predictable currency pairs
Previous ArticleEUR/USD Technical Analysis: Euro holding above 1.1050 in quiet Monday’ s trading
Next Article Ethereum co-founder Joseph Lubin says Ethereum and Bitcoin did not have to comply with regulations