Retail sales are the highlight for this week’s kiwi trading. Here’s an outlook for the events in New Zealand and an updated technical analysis for NZD/USD, leaning towards lower ground. 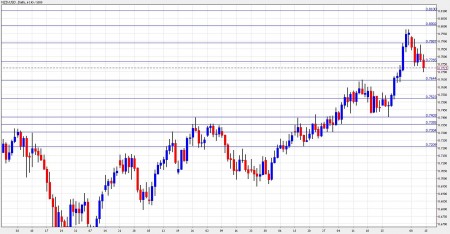 The kiwi was hit by global worries and especially regional ones – the Chinese tightening measures and the drop in commodity prices weakened the kiwi against the greenback. Will it recover?

The kiwi struggled with the 0.7890 line (mentioned last week) and eventually lost it. A recovery fell short of this line. The kwi continued falling and eventually closed the week at 0.7725, losing over 200 pips.

Looking down, support is found at  0.7644. This line capped the pair in October 2009, and also served as resistance recently – it now provides immediate and strong support. 0.7523 was another high peak on the kiwi’s way down over a year ago.

The next line below is 0.74, which capped the kiwi in the previous month, and also cushioned a fall of NZD/USD.  More support is found at 0.7355 which capped NZD/USD in the summer.

Lower, 0.73 and 0.72 also worked as support and resistance lines in recent months, and are now getting closer. The round number of 0.70 is a strong and distant support line.

The round number of 0.80 was almost reached in two weeks ago, and is a strong point of resistance. Even higher, 0.81 was a peak in March 2008 and also back in July 2007, and is now minor resistance.

The all time high of 0.8214 serves as the ultimate resistance line – it worked as resistance twice at the beginning of 2008, making it very strong.

I am bullish on the kiwi.

Despite the recent drops, great employment data in New Zealand, and the expected effect of QE2 that will push commodities higher, should all boost NZD/USD.

Retail sales are the highlight for this week's kiwi trading. Here's an outlook for the events in New Zealand and an updated technical analysis for NZD/USD, leaning towards lower ground. NZD/USD daily chart with support and resistance lines marked. Click to enlarge: The kiwi was hit by global worries and especially regional ones - the Chinese tightening measures and the drop in commodity prices weakened the kiwi against the greenback. Will it recover? Retail Sales: Sunday, 21:45. This important consumer indicator was a big disappointment last month - the volume of sales unexpectedly stalled in New Zealand. We're now expecting…