These numbers are worrying, but not as bad as earlier reported.

Fresh calculations have been provided by Jean-Pierre Chevallier, who is an independent financial analyst and have been highlighted earlier. These numbers don’t match the numbers published by the bank. Here is the clarification from them:

As stated in the Group financial reporting (Q2.11 supplementary data page 57 ), Societe Generale Net Asset Value stands out at of EUR 40.6 billion as of 30 June 2011. The Group Leverage Ratio would then stand around 28x (without taking into account the US GAAP netting conventions that would further reduce the leverage to around 23x).

Société Générale has a long term debt ranking of A+ by S&P, Aa2 by Moody’s and A+ by Fitch. 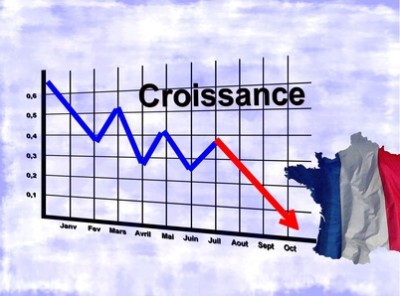 Chevallier also has data about about  France’s no. 1 bank, BNP Paribas, and one of the world’s largest banking group.

Lehman Brothers saw its leverage rate rise from 24:1 in 2003 to 31:1 in 2007 as it took more risks on mortgages. The downturn in the housing sector took it down.

French banks have the highest exposure to Greek debt – higher than German banks. French banks are also exposed to other peripheral countries.

At these levels of leverage, any small downturn in the peripheral countries endangers the bank.

France agreed to Private Sector Involvement in Greek debt on July 21st. This restructuring means that the burden on Greece will be lowered by around 20%.

German experts say this isn’t enough as it isn’t sustainable, and that a 50% haircut is needed.

Last week, there were rumors that Société Générale was going under. France’s president Nicolas Sarkozy returned hastily from his vacation and held emergency meetings. The presence of Société Générale officials was denied.

So were all other rumors, which the bank denied “categorically”, without relating to specifics, as Mish stresses.

As aforementioned, such leverage rates make the banks very vulnerable. In order to stabilize the building before the smallest wind brings it down, new capital is needed.

One way is to get aid from the state, and this could be the reason for Sarkozy’s action. But asking for government aid has implications: it can create fresh panic and also endanger France’s perfect AAA credit rating. There were rumors about a downgrade as well.

Another way to recapitalize is to sell shares. But when share prices are falling, it is much harder to do that. This may explain why French authorities, together with regulators from other countries, decided to ban short selling in an effort to stop the drop in the value of the stock.

In the meantime, there were reports that an Asian bank cut credit lines for French banks amid all these worries. 5 more banks in Asia are considering the same.

If any of the big French banks goes under, or even asks for government aid, the situation will deteriorate quickly. France is the euro-zone’s second largest economy. This economy stalled in Q2, and severe credit crunch won’t be helpful.

What do you think?