Idea of the Day

Is the Aussie forming a base for amore sustained move higher? This is the right question to ask after the RBA issued a more neutral statement after its rate decision overnight, removing the reference to scope for further easing. The pattern on AUDUSD has been for corrective rallies in a broader downtrend. The last low was in early August (at 0.8848), and the late August period of dollar strength did not seen a fresh low for the year made. The fact that the RBA has signalled a pause in rate cuts removes one of the bigger drivers of Aussie weakness. With a modest tapering from the Fed priced in for later this month, there is decent scope for the Aussie correction to continue above the 0.90 level. 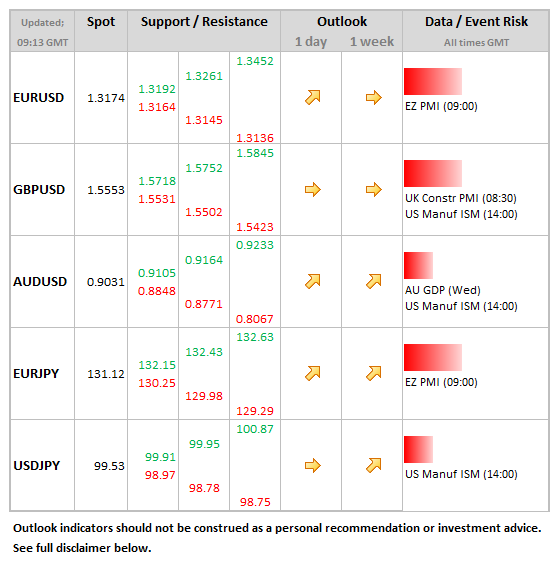 USD: Manufacturing ISM the main focus after the long labour day weekend just gone. The series hit a 2 year high with last month’s release and there is an expectation we’ll see a pull-back to 54.0 from 55.4. Dollar will try to stay cool on firmer release ahead of payrolls on Friday, but rise would be dollar positive.

EUR: Just PPI data for the Eurozone released. Main focus is on German election campaign and the ECB meeting on Thursday. Euro itself continues to hold up relatively well in the face of a stronger dollar, in part helped by better data and contracting ECB balance sheet.

GBP: The construction PMI data in focus and the survey data has continued to surprise to the upside, yesterday’s manufacturing release being the latest example. Firmer than last month’s 57.0.reading will offer further support to sterling, which has stood up well to broad USD strength.

AUD: Retail sales were weaker than expected (rising 0.1% MoM) and rates were steady from the RBA (at 2.50%), but the Aussie managed to push ahead on the basis that the RBA left out reference to the ‘scope’ for further rate cuts, if warranted.

JPY: USDJPY clawing back to the 100 level, a level not seen for over 5 weeks now. Data for the monetary base showed a 42% increase, reflecting the continued road to a doubling of this measure as part of the BoJ’s quantitative easing strategy.

CNY: Non-manufacturing PMI showed a small decline to 53.9, from 54.1. Stocks remain buoyant, at a 12 week high, whilst USDCHY holds steady around the 6.12 level.

RBA wants a lower AUD, but AUD/USD climbs above 0.90 again