Home » The beginning of the end of QE?

The beginning of the end of QE?

The next meeting of the FOMC may still be four weeks ago, but Fed officials have been hitting the newswires en masse recently declaring that they would like to see quantitative easing end in June. Yesterday, the dollar got a boost from some hawkish comments from St Louis Fed President Bullard, who declared that the Fed could decide on tightening policy ahead of clarification of the outlook for the global economy.

Like some of his compatriots, Bullard is conscious of the fact that monetary policy would still be extremely accommodative even if the Fed started the process of normalising policy. Bullard last week expressed a desire to see QE reviewed and possibly ended early, while Philly Fed President Plosser explained that the Fed’s holdings of treasuries could be wound down at the same time as interest rates were raised.

It remains to be seen how quickly this could realistically take place. If the Fed simply allowed treasuries to mature without replacing them (currently, any maturities trigger fresh buying), then this would be much less disruptive than attempting to find secondary buyers at a time when rates were being raised. At the risk of stating the obvious, the Fed’s exit strategy from its huge bounty of treasuries will necessarily take a long time to implement. 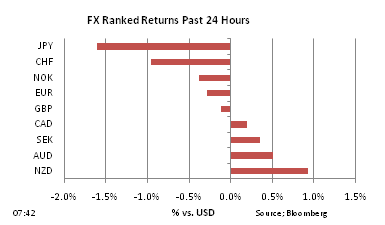 The Teflon-coated euro. With the end of the first quarter rapidly approaching, most whom observe fx markets would still probably be surprised to learn that the euro has been the best-performing major currency, with a gain of 6% against the dollar and 3% versus the pound over the period. Considering the worsening troubles in the PIGS, as reflected in ever-rising bond yields, and the fundamental inability of eurozone politicians to agree on a proper response to the debt crisis, the ability of the single currency to outperform suggests a Teflon-coated quality that will not ultimately be sustainable.

There are three very clear explanations for the euro’s resilience. The first is the ECB’s apparent determination to hike interest rates in response to the growing concern on the Governing Council about rising inflation. Indeed, ECB President Trichet yesterday expressed a worry that a higher rate of inflation may persist for longer than currently anticipated, implying a series of rate-tightenings may be in prospect. For the year to date, the 2yr EUR/US swap spread has widened by 60bp. Secondly, Asian central banks, especially the Chinese, have provided critical verbal and financial support for the euro as part of their determination to reduce dependence on the dollar. Thirdly, the German economy has continued to power ahead in impressive fashion, while the likes of France and Italy have also performed well enough.

Trader opinion on the euro has swung dramatically over the course of the quarter; early in January, the positioning data suggested that traders were heavily net short. Now, however, traders are very much net long. It remains to be seen whether they are placing too much emphasis on interest rate differentials at the expense of ignoring the still very disturbing debt dynamics throughout the eurozone.

UK trade bounce-back based on hope. The fact that Q4 GDP was revised up back to the initial estimate (from -0.6% to -0.5%) is neither here nor there in the grand scheme of things. The most worrying aspect though is what’s happening with net trade, together with the faith that the Office for Budget Responsibility (OBR) is placing for a come-back here. Overall, the evidence is looking thin. Net trade (exports minus imports) lopped -0.5% off the quarterly change in growth, with this being partly offset by the increase in capital investment and also government spending.

What’s more interesting is the extent to which household incomes are being squeezed, both after inflation and tax. Currently this measure is running at -1.1% on an annual basis and, quite understandably so; households are not that disposed towards running down savings to cover the short-fall, the savings’ rate nudging just a touch lower from 5.5% to 5.4%. That households are showing more caution is a positive development, but the real issue is that the rest of the economy is not taking up the slack, especially with all the indications pointing towards continued weakness in the household sector over the coming year.

The trouble is that it’s difficult to see what is going to propel growth going forward. The budget forecasts from the OBR were optimistic on net trade being a driving force and its Director, Robert Chote, pointed yesterday morning towards the big lag between sterling weakness and the benefit to net trade. So far that lag is around two and a half years. But, looking at the US experience, the evidence suggests a lag of two years is when most of the benefit of a change in the exchange rate feeds through to net exports. We’re now beyond that two-year period, so the OBR appear to be suggesting that the UK economy operates quite differently from the US, or is banking more on the eurozone (the UK’s main trading partner) staging a sturdy bounce-back. Both look unlikely.

US Republicans and Democrats edging towards budget compromise. It has been incredibly painful, but ever so slowly the two major parties in the US are heading towards a budget compromise that will ensure the US Government is funded all the way through until September. On the table is a proposal to reduce spending by an extra $30bn, on top of the $10bn already agreed. It is not as much as the $60bn that most Republicans were hoping for, but neither is it the spending freeze that the Democrats were pushing for. The two sides are still up against the clock and need to reach agreement before April 8th to avoid a government shutdown. For the dollar, a budget deal that contains some spending cuts would probably be helpful, although the amounts being discussed are tiny when set against the magnitude of the fiscal mountain.

A weak-looking yen. Since the co-ordinated intervention by the G7 back on March 18th, the yen has been consistently lower against most major currencies. This has been especially evident against higher-yielding currencies such as the Aussie, the Brazilian real and the Kiwi – as such, the so-called carry trade, whereby traders/investors borrow in a low-yielding currency to purchase assets in a higher-yielding currency, has been quite successful. In Brazil for instance, the benchmark interest rate is currently 11.75%, compared with a near zero rate in Japan. If the BOJ specifically, and the G7 more generally, remain determined to prevent any yen strength while the Japanese economy gets back on its feet then it is plausible that we will see more of these carry-type trades out of the yen into the high-yielders. USD/JPY has continued to climb overnight, now 82.90, while AUD/JPY is up at 85.50, a rise of more than 10% in less than two weeks.

Investor sentiment – very bearish in Europe, optimistic in US & Asia. State Street produces a very interesting and useful index of investor sentiment each month, and the March version was released yesterday. It showed that sentiment amongst investors improved significantly in both the US and Asia this month, to an index level of above 100. In sharp contrast, investor sentiment in Europe has fallen dramatically in the past few months, from 109.8 in November to just 64.3 in March.

FXCM Takeover? Not so Fast

The next meeting of the FOMC may still be four weeks ago, but Fed officials have been hitting the newswires en masse recently declaring that they would like to see quantitative easing end in June. Yesterday, the dollar got a boost from some hawkish comments from St Louis Fed President Bullard, who declared that the Fed could decide on tightening policy ahead of clarification of the outlook for the global economy. Like some of his compatriots, Bullard is conscious of the fact that monetary policy would still be extremely accommodative even if the Fed started the process of normalising policy.…