Last week, the BOC maintained its target rate at 1.0% but gave a strong hint for future rate hikes in light of improvement in domestic and global economic conditions. Mark Carney sees household debt as the No. 1 domestic risk to economic recovery wishing to reduce further borrowing. The BOC expects moderate growth of 2.1% and economic conditions are a bit stronger than projected in January. Will domestic conditions continue to improve?

Updates: USD/CAD has bunped up close to the parity level, trading at 0.9970. The markets are waiting for the release of two key indicators on  Tuesday. The first is Core Retail Sales, one of the most important consumer indicators. As well, the head of the Bank of Canada will be speaking, and the markets will be hoping to get a clue as to future monetary policy. The loonie has moved  higher, as USD/CAD is trading just above the 0.99 level, at 0.9905.    After a decline in March, Core Retail Sales rose 0.5%, close to the market forecast of 0.6%. Retail Sales did not fare much better, posting a decline of -0.2%. The markets had forecast a 0.1% increase. The loonie contiues to push upwards, as USD/CAD is trading at 0.9862. The pair has not traded at such a low level since early March. No further releases are expected for the remainder of the week, except for a speech by Bank of Canada  Governor Carney. USD/CAD continues to move downwards, trading at 0.9826. 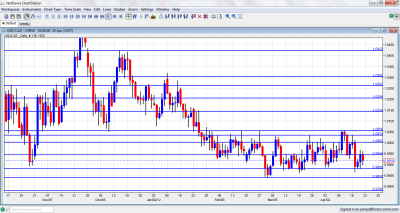 $/C$ started the week with a move higher but met 1.0030 line (mentioned last week). From here it changed course and fell sharply, even temporarily falling under 0.9880. USD/CAD eventually closed at 0.9918, lower, but within the range.

Most lines haven’t changed. The round number of 1.03 was the cap of a move upwards back in November 2010 and has found new strength after working as resistance  in January 2012. 1.0263 is the peak of surges during the last quarter of 2011, but was damaged after the move higher. It’s far at the moment.

The round figure of 1.02 was a cushion when the pair dropped in November, and also the 2009 trough. It is weaker now but remains pivotal. 1.0143 was a swing low in September and worked as resistance several times afterwards.

The very round number of USD/CAD parity is a clear line of course, where the fight continues. It is more of a pivotal line than real resistance. Under parity, we meet another pivotal line at 0.9950. It served as a top border to range trading in March 2012 and later as a line in the middle of the range.

0.9880 was a double bottom at the beginning of April 2012 and is a key line on the downside for now. A small breach is regarded as a false break. 0.9870 was a trough reached once and challenged afterwards, and serves a bottom border of the range.

0.9830 provided support for the pair during September and is now stronger after a first attempt to breach it failed.  0.9780, where the current run began is the next and important support line.

It is closely followed by 0.9736, which provided support during August 2011.  The veteran 0.9667 line worked as support at the beginning of 2011 and then for several months during the spring. It is a very clear and strong line on the chart.

I turn from neutral to bearish on USD/CAD.

The hawkish words from the BOC, together with  Canada’s strong employment figures  keep the loonie strong despite more signs of weakness from its main market: the US. It seems like the upcoming FOMC decision is a win win for the loonie: hints about QE3 will weaken the greenback and boost oil prices, while a hawkish statement will put confidence in the US economic strength, and this is good for Canada as well.

The Canadian dollar gained against the greenback, but USD/CAD remained in range. Will it break ground in the upcoming week? Mark Carney's speeches and retail sales are the major events this week. Here's an  outlook  for the Canadian events and an updated technical analysis for the Canadian dollar. Last week, the BOC maintained its target rate at 1.0% but gave a strong hint for future rate hikes in light of improvement in domestic and global economic conditions. Mark Carney sees household debt as the No. 1 domestic risk to economic recovery wishing to reduce further borrowing. The BOC expects moderate…